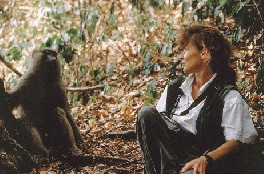 Barbara B. Smuts is an American anthropologist and psychologist noted for her research into baboons, dolphins, and chimpanzees. Smuts received a Bachelors Degree in Anthropology from Harvard University and a Ph.D in neurological and biological behavioral science from Stanford Medical School.

Much of Smuts’ research concerns the development of social relationships between animals, particularly among chimpanzee and baboon populations. Smuts began studies of wild baboons in 1976.[3] Studies she made of wild olive baboons in Tanzania and Kenya inspired her 1985 book Sex and Friendship in Baboons. The book, the fruit of two years’ research, showed how two different groups of the same primate interact with each other socially. She determined that friendship was a critical predictor of sexual activity between male and female baboons: females preferred to mate with males that had previously engaged in friendly interactions with them and could interact with their other offspring as well.