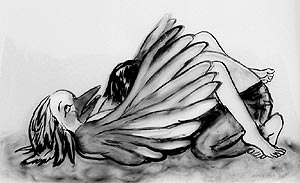 Shary’s Boyle
In the afternoon Shary brings me faces, small squares drawn in Berlin, which quickly overflow her lap, the table, the furniture and windows, the scenery. Everywhere I look, they look back: figure and ground, a new horizon. Inked from compulsion, each appears as afterworld reminder. Here are the faces of those who have already seen too much, but continue to watch from the other side, where there is only vigil, their days of action, of living, already behind them. Unable to speak, the story of their end is written on these faces, and no doubt now, the story of our own.

Memory is a form of forgetting. A sub-set. A part of. Just as forgetting is a kind of pointer (it used to be here, in this place), a form of hidden memory. Shary draws in order to remember and to forget, in equal measure. There is an urgency on both sides to which she responds. She knows she can’t wipe the tears from her face. If she does, her face will disappear.

Shary sees with her hands. She traces shapes, admitting the light and dark of the world through her fingers. I use my hands to frame encounters: they clasp hello, wave good-bye. Shary uses them for everything in between; not only to see, but to demonstrate the act of seeing itself.

Note: The following four paragraphs have been deleted from this essay because of space considerations.

Boyle is a form of boil which the OED allows as “a hard inflamed suppurating tumour; a furuncle… a swelling on a painted surface resembling a blister.” There are some who believe that we can find, tucked away in the corners of an artist’s work, autographs which affirm and fulfill an artist’s naming. These folks, who must themselves never be named, believe that a work of art is signed by its author over and over again. So when I look at her drawings it’s hard to stop myself from thinking, “Oh. Shary Boyle!”