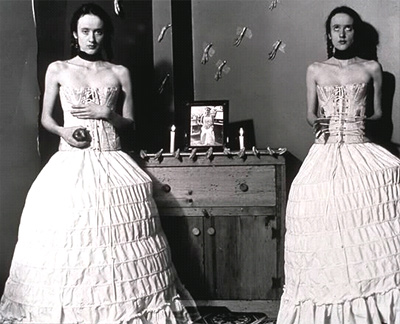 You’ve probably noticed that there’s a camera in the front of the room. It’s a special camera which works with the same technology as air ports, the computer part not the flyaway building. Why is it that they call airport buildings, terminals? This camera will be reading your response, or at least your initial response, and feed it back as the artist speaks. You may begin to notice very subtle changes beginning to take place in your body, some new mood, some new feeling you’ve never quite encountered before, not like this, but don’t be alarmed, they’re just symptoms of technology. Like saying hello, or I love you or I can’t, I can’t do that anymore.

There is an image, I see it everywhere I go, that keeps its secret by trying to show us everything. The car bomb in Baghdad, the Chechens on the way to school, the face of Yasser Arafat. Because they are manufactured to speak, instruments of empire, they’re not able to show me anything. They are the beginnings of a reporter’s sentence, no more, no less, an image which even the newsreader refuses, turning her back to them, turning away from them. These expensive pictures have purchased a place in my retinas, they are the pictures that I see everyone else’s pictures through, even my friends.

When I met Janieta she was a writer, she was a writer in the way that you know when you’re eight years old you’re going to grow up to be a writer because it’s already waiting for you. She was a writer who started taking pictures, by accident. Not the decisive moment but the indecisive one. Not the one that you grasp with both hands – holding it there for all the world to see, you’ve earned it, it’s yours – but instead a glance, a sideways step, on her way towards somewhere else. She used any way she could to cheat her poised and beautiful words, the words that already knew, that were already drawn around her experience like a noose. She bluffed her way past the politburo, the personal cultural commissioner, to arrive by accident at the place where pictures come from. Derrida says, the dead Frenchman, the philosopher, who learned so well from his mother: everything begins with reproduction. And already for Janieta in 1992 there was the multiple, the series, the addition, a collection of pictures she called Rehearsals.

She died in each one of those pictures, and came to life again only so that she could make another. And then another, and then another, until it got to be the usual thing. Getting up every day and going on. Taking the next step. One day it wasn’t necessary to die any more, but the pictures kept coming.

Every picture keeps its secret in the act of revealing, every act of showing and display is also a refusal. Every picture has this mystery lying at the heart, something never seen, no matter how many eyes or how many times or how many tries. Allow me this moment of faith, this assertion of what I can’t possibly know. Without this mystery, there is no picture, only a surface, an emptiness, a place where there might have been a picture. The history of photography.

How intimate she is with this mystery, how quickly she finds her way towards it. It’s obvious from the very first time she ever holds a camera. She’s home.

Janieta’s pictures arrive in a serial form, as part of an ellipsis, already a kind of cinema. And then this, and then this, and then this happens. There is always more, and the suggestion of stories. They are glimpsed through the aperture of personality, how could it be otherwise: I am, I will, I do. When I look at them, they always say yes to me. Yes I can look at this. Yes I can take it, bear it and allow the unconscious to speak, which is not the smooth story, already prepared, already rehearsed (my thoughts my world). Instead these pictures are part of the unthought world, part of the mémoire, the second kind of memory which exists before stories are possible, and which erupts and arises as an unwelcome guest. A surprise glimpsed in an instant. A fragment.

And when I looked at them then, and when I look at them now, I remember the words of Anne Carson, which might have been Janieta’s had she decided to tell her story, instead of living it: that every wound gives off its own light.

(The above was delivered as opening remarks for Janieta Eyre’s talk in the Kodak Lecture Series at Ryerson Polytechnical Institute, Nov. 2004)