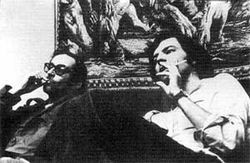 Godard comes from a generation marked by two major technologies of transformation. The first was the pill which would link sex and revolution, transforming relations between men and women. The second was television which was an instrument of social make over, re-forming visual codes which had been linked to cinema (a practice as old as Egypt). Cinema in the modern sense means one layer of acetate and four layers of chemicals which are struck by light, fixed by chemicals in order to create the illusion of depth. It is an art wedded to the art of lighting. Video, on the other hand, is defined by the intersection of points and lines.

By the 1960s the art of light is disappearing, film stocks are faster, there is a regressive curve in terms of the image and a progressive curve in terms of sound development. The 1960s mark a declaration of independence in terms of sound and image. Technologically speaking, the key item is the Nagra developed by Swiss scientist Kudelski at the request of the two NASAs (the space agency and the spy agency). This portable, high fidelity reel-to-reel audio field recorder would change the way sound was heard on and off screen.

The cinema was the project of a total art form. Opera was the 19th century manifestation of the total art work, and it was intended for the bourgeoisie. Cinema was for the working class. Cinema was the product of a copulation of freaks in the sawdust of theatre. Its form exists always in relation to already existing arts. Cinema is a hybrid practice, a mongrel media, a confluence of other arts. Throughout its history it is dominated by one of the other arts, and this is how cinema history can be periodized. The art which dominates cinematic form from its inception up to the 1960s is literature. Godard will operate the passage from literature to painting. Like all the other members of the nouvelle vague he wants to reaffirm the link between cinema and literature, but as a contrarian he asks why it is necessary to follow Balzac and Dickens, the social realist narratives of a century ago. (Eisenstein writes that Griffiths work appears like phrases from Dickens). Why not Joyce, Chandler and comic strips? And why not, especially, the French 12th century writer Montaigne, the person who created the form of the essay?

This questioning occasions a shift in the way Godard makes his films, though he arrives at his discovery backwards. What kind of machine is Balzac or Dickens, conjurors of the traditional narrative? These stories are based on causality, it’s inevitably binary, either/or, you’re always at the crossroads, in a world which can be endlessly subdivided into further crossroads. Godard’s refusal of Balzac creates another kind of machine. The revolutionary gesture/function of Godard is to create units (or systems) which don’t flow into each other but which appear and accumulate next to each other (and in this accumulation there resides the ghost of something else).

The second act of revolutionary process. Godard begins his first feature Breathless so afraid of not getting an image that he hires Indo-China war photographer Raoul Coutard. If Coutard can work with bombs falling all around him he will be fine in Paris. When they meet they speak about what they cannot do. Godard always functions within his limitations, cognizant of them, and uninterested in transcending them. He follows this dictum from Wittgenstein: “That which you cannot express there is no need to express.” Godard and Coutard agree that they don’t know how to light. All discussions lead to propositions for action. They need fast film stock, it doesn’t exist in film but there is an Ilford stock for still photographs which can be used with very little light, so they stick together rolls of still film. It is the fastest film stock they can find. This stock will reduce the need for lighting to a minimum. Sub-revolutionary gesture number one: they want their film to look like the cover of Look magazine. The look itself is not revolutionary, but the fact that the reference is an image is important. Not an image of the world but an image of an image. This is the moment when the doors of hell are open, the practice of art from this moment on is incessantly engaged with self referentiality.

Sub-revolutionary gesture number two: In Godard’s third feature, Les Carabiniers, the material he films will be edited with already existing newsreels. In order to match the tonality of these two stocks he prints the entire film on soundtrack stock, which increases the contrast. Painting
When Godard works with colour he shifts his relation from literature-film to painting-film. He is preoccupied with design strategies. Now the problem is that having fast stock doesn’t work. He still doesn’t know how to light and the problem of lighting is the problem of shadows. If you’re a bad filmmaker you rush to go to school. If you’re a great filmmaker you ask: what is the moment of the day with the least shadows? High noon. So you make your film in a perpetual noon. You line the ceiling with sheets of aluminum foil and blast light towards the foil. The light descends and figures are stuck against the background like a butterfly against the wall. Godard started making films to meet girls, who were young, which gives him beauty. In this lighting scheme, beautiful butterflies are stuck against the wall. His solution was to swathe them in primary colours, a blue dress, a red blouse. These primary colours are like the moment in Alice in Wonderland when she passes into the mirror, because from now on cinema will never be the same. Now Godard is no longer with Dickens or Balzac, but the painter Matisse. The autonomous moments he presents in these films are like paintings in an exhibition. (Many will follow his example and fail, like the cretin Wim Wenders whose work is based on paintings by August Sander and Edward Hopper.) Godard introduces characters like brushstrokes in a painting. What are the new possibilities of storytelling? The gesture is both a shift and a murder because by throwing cinema into relation with painting he murders cinema, after all we know from Shakespeare that kings murder kings. The first murder is to change the nature of the image. The nature of the painted image is to appear and remain in the frame, whereas the nature of the film image is to disappear. Sound
The young Godard, a lazy misfit, steals a safe from his father’s office but can’t open it, and in desperation drops it off the roof of a building hoping to crack it open but it lands on a police car. Hoping to avoid prison time, his father arranges for him to spend time in an asylum. When he is released he is dispatched to South America where he hears sounds of the jungle. He experiences sound as a magma, a mesh. It is a sound which is profoundly different from what is permitted at that moment in cinema which is dominated by legibility. Cinema sound is a clean, puritanical sound. Godard’s second revolutionary device is to change the nature of film sound. He uses the Nagra to access sound which refuses legibility, which admits a magma. It is rough, unpolished, and dense, actor’s phrases are marked and emerge from the sounds which surround them. His cinema is marked by these two moments: a painterly space derived from Matisse, and a dense, urban jungle sound.