The body has its own time. We’re meeting in the evening, when the body is digesting the day psychologically and physiologically.

Another  layer: there is a timeless quality of time. Crying and laughter don’t  happen only in personal time. These activities connect us to a timeless  time.

Another layer: Last week there was a precepts ceremony that  began when the elders (with their corn starched hair turned white) did  walking meditation with dark balloons tied to their hair. The aim was to  walk so slow that the air wouldn’t move, that the balloons would be  still. There is a person inside us who might wake up during a ceremony.  Most of us are afraid of ceremonies because they remind us of the  religions we’re running away from, but ceremonies are part of a  trajectory of ancient rites and rituals. 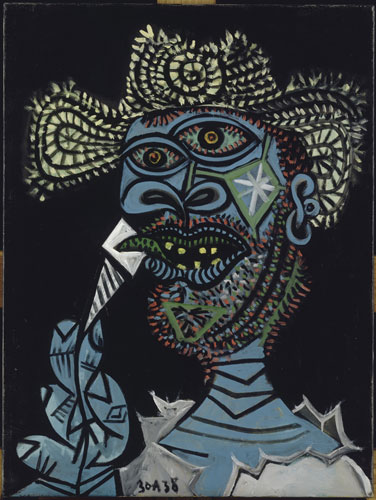 Picasso
A fellow diner approached Picasso who was sitting at a nearby table in the diner. “Would you mind making a little sketch for my wife? She adores your work.” Picasso makes a drawing on a plate, and then asks for $1000. “But that’s so much money!” But it’s taken P so long to learn how to make that drawing. He wants to be paid for the kalpas. The hidden time that is embedded in this present moment.

What’s in it for me?
The Lotus Sutra measures time in kalpas – glacial ages. You can count on the Indians to measure time in the strangest ways. Where were we in the story of the Sutra? The Buddha Great Wisdom Excellence has been teaching The Lotus Sutra for 8,000 kalpas, and then he rested for 84,000 kalpas. Someone has to teach the Sutra while he rests. Why? Because people don’t get it. Why don’t they get it? Because they want to attain something. This is OK because it’s a way to get people in the door. It’s upaya, skilfull means. For instance, people come to a yoga studio so that they can get in better physical shape, or become stronger or more flexible. They’re coming so that they can get something. But the heart of the practice lies somewhere else.

Deja Dharma
Who will teach The Lotus Sutra? The Buddha Great Wisdom Excellence has 16 sons and they begin to teach, perhaps they’re tag teaming. Then the Buddha Great Wisdom Excellence rouses himself from what turns out to be a state of deep Samadhi and gives them all predictions and names. Each of the sons is a cosmic principal – we won’t get into that here – but the last son’s name is Shakyamuni Buddha – the one we know simply as “the Buddha.”

This is the punchline of the story of all those sons. Do  you get it? If Shakyamuni is the last of 16 sons, it means that he is  just another Buddha in a long line. The Lotus Sutra was already being  taught for 84,000 plus 8,000 kalpas. The Buddha was nothing new, but  part of an ancient lineage. It’s as if someone 600 years from now would  find a way to make a filament glow with light, long after the grid  collapses. She would be a kind of “inventor” of electricity, though of  course electricity existed before. One can hear in this radical  retelling of the Buddha’s story an echo of one of his earliest  teachings. When he first spoke about his enlightenment he said it was  like discovering an ancient city that was once flourishing. In effect  the Buddha was saying, “I discovered nothing.”

Phantom City
The Buddha Great Wisdom Excellence is the one who teaches Shakyamuni – now he needs to explain how this came to be. In order to do he tells the parable of the phantom city.

Suppose there was a stretch of steep bad road,
In a remote wasteland with many harmful beasts,
A place moreover without water or grass,
One dreaded by people.
A group of countless thousands and ten thousands
Wanted to pass over this steep road,
But the road was very long and far-stretching,
Extending 500 yojanas.
At this time there was a leader,
Well informed, possessing wisdom,
Of clear understanding and determined mind,
Capable of saving endangered persons from manifold difficulties.

The leader takes the countless thousands along the steep road, but after many days of traveling he sees that his charge are getting tired,  nothing he says is working, the people want to quit. They’ve become  grumpy like men who haven’t eaten. So he tells them that there’s a great city, a phantom city, that he conjures up with nice beds and hotels and  fine places to stay. The people come to rest there. And after they’ve rested enough he tells them that this is only a phantom city, and that  they need to go on. There are brighter and more precious jewels up  ahead.

The phantom city is the illusion of the peace of nirvana.  The road they are taking is your life. Your life, sometimes, is a bad  road in a bad neighbourhood. You need someone to help you: friends, a  confidante, a teacher. But then you get tired, you feel you can’t take  another step, so you need a phantom city.

Mirage of Destinations
Most people begin meditating because they think they’re going to gain something. Peace of mind, stress reduction, an ability to be less reactive. But the Buddha says that there is nowhere to get to, not even nirvana. Every destination of the practice, every promised goal, is just another instance of upaya, skilfull means. We all need a story to hang onto about where we’re going. Can we loosen the grip of some of those stories, and imagine for a moment they are not us, ourselves? Perhaps nirvana is this place, here and now, not somewhere else. Perhaps our goal is this reality, what is actually unfolding now. We want to be on a path that’s leading us somewhere, that’s taking us to nirvana perhaps, but maybe nirvana is not a place where peace is found. Pilgrimmage
In yoga we also take a pilgrimage on a rough road. It begins in the mula bandha and moves up to the crown via the sushumna nadi, the central column. This is the central plumb line of the body, a road that is at once physical and psychological and neither. This road begins in the mula(root)dhara (place) chakra (wheel/mandala). The root diaphragm is your pelvic floor – it has four lotus flowers in it (symbolizing the four nadis that flow out of this place).

Chakras are places where  you can rest – like the many Swiss mountains which have built up rest  areas where the tired traveler can take a break and restore. They are  platforms for climbers. Over thousands of years, yogis have found that  there are energy centres called chakras, though they’re often missed the  fact that these chakras are also phantom cities.

What about  scientists? Are they tuned in? There are neuroscientists in Wisconsin  who are busy hooking up the brain with sensors (as if the brain was  something that existed only in your head). But just because you can see  colours doesn’t mean you can see someone’s thoughts. It’s easy to get  swallowed up in these phantom cities.

Don’t Pass Over Passover
When I was at Passover last week I discovered to my surprise that I could still read Hebrew. When I was 6 I loved to learn Hebrew in the synagogue, and sing with a cantor. But when I was 13 I didn’t want to have anything to do with that anymore, so I walked away. The Hebrew and singing were phantom cities. So often, when we recognize a phantom city, we want to exclude it, cast it out, reject it. That’s not me. That’s never been me. Is it possible to make a softer landing for our phantom cities? To be able to live with the stories we used to cling to in a way that makes space for them, without needing either to cling to them or to reject them?

Actor
My life has always been about achieving, and the rewards that arrived as the attention of others. I’ve always been concerned with ends. Ever since I was a little girl I have wanted to be an actress. But slowly I learned that everything I loved about acting could be found in other ways. The more I set goals, the more it robs me of where I am.

Can you remember a  time in your life when you were residing in a phantom city until  someone pulled the plug? Usually this person is someone you turn into an  enemy for life. Maybe you can go back to the fiction of this story and  rework it. Maybe they are your guru, even if they’re unconscious of this  fact.

And: what if the plug had never been pulled? What if you had just kept going on that path?

Right  now you’re in a phantom city but you can’t see it. You only know you’re  dreaming when you wake up. Can you pull the plug? Can you see the  construct? I always tell my dad: I needed those first three marriages.

Love
The Lotus Sutra is a Mahayana Buddhist text that appears as a response to previous centuries of sutra study. These sutras were philosophical, filled with stories and songs and mythologies. The Lotus Sutra (by contrast) is a love story. I hope that as you’re reading it you can feel that you are the road and the kalpas, and the flowers falling from the sky. Every Buddha is in a lineage that runs all the way back to you. We can trace our lineage through the saltwater of our tears into the oceans. Everything everywhere again alive.