A series of talks on and inspired by The Yoga Sutra, a text written by mysterious author(s) often named Patanjali in the second century. Centre of Gravity Fall 2011. www.centreofgravity.org

Not Knowing
Chris Hedges, a longtime award winning journalist, said that he’d covered every major revolution in the past 25 years… and that he was sitting around with friends in Berlin one evening in 1989 who were musing that the wall might come down in a year, or two years, or perhaps never. Six hours later it was down. In other words, no one knows what is going to happen – this is the nature of a movement. Of profound social change. You need to figure out where you stand and then drop it. What is the occupy momentum? It’s not an organization, or a campaign, it’s a changing, shape-shifting MOVEMENT. Like the women’s movement in the 1960s, there are many different ideas about what the problems are, and how to address those problems. One of the qualities of a movement is that it seems to come out of nowhere.

At this moment there are 1900 Occupations around the world – in Canada alone there are 32. Why now?
Why is it happening? It’s a cry against the inequalities of the system. And the first inequality that was addressed was economic. In the United States, where the Occupy movement began, the top 1% controls 42% of the wealth. If you make more than 1/2 million dollars a year, you’re in the 1%. The bottom 20% earns less than $6,000. In the 1970s the top 1% controlled 8% of the nation’s wealth. Since 1987 African-Americans have lost 1/2 their net worth, Latinos have lost 2/3 of their net worth. What we are witnessing is a class war waged by a rich white minority against the rest of us. Taxation, health care, massive housing foreclosures, environmental devastation, educational segregation, defunding of state services: these are symptoms of the class war. 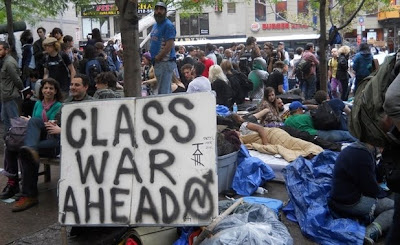 Mainstream media didn’t pay attention until white middle class people began taking action. Political class and the media have been complicit with the quickly growing gap between rich and poor. The media have spoken in the master’s voice, masking it as common sense. Neo-liberalism means tax cuts, privatization, a lack of regulations, cheap labour outsourcing, so-called free trade deals, etc. The mantra has been: what’s good for business is good for everybody. Look after the wealthy and profits will “trickle down,” but there’s no trickle down, there’s only trickle up. More and more wealth is generated and it all goes to the top and stays there.

The Occupy movements are addressing this inequity. “We are the 99%.” The disparity between have and have-not is starker in the United States than in Canada because we have better unions. In 1981 Reagan fired 11,345 air traffic controllers and banned them from public service for life. In Canada we networked and developed coalitions against the free trade agreement. Mulroney pushed it through, but it was limited, he couldn’t get everything he wanted because of the organized resistance. We didn’t get the fulfillment of that neo-liberal dream until the Mike Harris government came into power in Ontario.

Today, the gap between rich and poor in Canada is the fastest growing in the so-called developed world. The present day inequities are the largest since the great depression, an economic calamity that led to a huge upsurge of working class radicalism. This moment is like that moment, except it cuts across class lines. Bill Maher said that he was waiting for the hard hats to attack the hippies but this time the movement is youth led and supported by unions. New Society
When I visited Occupy Wall Street in New York it was like a dream come true. It is a new society in miniature. For instance, it is a no-money economy. Everyone shares everything. The food is great, it was the best meal I had in New York in two weeks. I was there with Velcrow Ripper who was shooting Occupy Love and when it started raining someone showed up beside us with an umbrella. “Do you need this?” When I returned it, the woman at the desk thanked me as if I had given her a precious jewel. “This is exactly what we need right now!”

There is constant discussion of issues. In Sante Fe there has been a lot of talk between the Native population and the Occupiers (where have you been for the last 200 years?), in NYC there was a lot of talk this past week about neighbourhood noise complaints and the drummers. There are daily meditations. On Thursday some anti-Semitic remarks were aired, and the following night (Yom Kippur no less) 200 Progressive Jews showed up to recite the prayer of the dead, and they put up a sukkah (a temporary dwelling to celebrate the harvest), and invited everyone to join them in prayer. There is a place for everyone.

“Princeton University Prof Cornel West was arrested Friday at an Occupy Wall Street rally in Harlem protesting outside a police precinct against the NYPD’s ‘stop and frisk’ policy. In a video uploaded by The New York Times’ Corey Kilgannon, West is seen slowly turning around and putting his hands behind his back to allow a police officer to handcuff him. The crowd behind West is chanting, “We won’t stop until we stop ‘stop and frisk.'” The stop and frisk policy allows police officers to stop anyone and search them. These searches, which target primarily blacks and Latinos, have led to an increase arrests for possessing small amounts of marijuana. The New York Civil Liberties Union, a critic of the practice, says that roughly nine out of 10 stopped by the police are black and Latino.” (International Business Times) There is a growing sense that negotiations with police and politicians aren’t worthwhile, that they are going around the existing leadership and the existing structures. They’re not just protesting against a system, they’re living in a different way. There is an enormous pressure to articulate demands, as Van Jones said, addressing the Occupy crowds in Zuccotti Park: “They ask us what do we want? We don’t want anything. We want everything.”

The women’s movement had different foundational strands. Betty Friedan insisted: women don’t want to be only wives and mothers. A movement starts with an identification of a problem. And this forces people to talk about it. Even The Economist, the magazine of the 1%, ran it as their cover story this week.

Whenever you have demands the movement divides, and this is not necessarily a bad thing. Some people think the solution is a new economic system that is more fair, run by people and workers. This is a revolutionary demand. In the women’s movement the idea of a “gift economy” was floated, and I might have thought it was a bit flaky then, but now it’s being practiced. The reason the food is so good at Occupy Wall Street is because it’s not a charitable donation, instead it’s a way for people to express their solidarity. When I walk through neighbourhoods in Toronto, merchants approach me and ask: how can I express solidarity with the Occupy movement? How can we help? Because they feel inspired.

The powers that be don’t know how to attack or repress the movement yet. But eventually the repression will come. Instead of the savagery of the Tea Party, which imagines a society in which everyone turns against everyone else, people are sharing like they did in the 1930s.

From Occupy Wall St. website
A message to blue-collar police:
Do not do what you are told. We are peaceful and you know this. We offer you coffee in the morning and water in the day. You always refuse and we know that’s because they told you to. Speak of the crimes of your supervisors. We will help you. We are expressing the same frustration that you feel. You are the 99 percent. Join us. Join our conversation.

The general assembly is the new democratic form created by the Occupy movement. There are hand signals from the crowd (ok, that’s enough, or yes!), volunteer coordinators, it’s consensus driven. Once a need is decided upon people take it upon themselves, and have such agency, and this leads to a profound intellectual and emotional fulfillment. Kevin, from Occupy Toronto says: “I’ve never worked so hard. We come from an expert-based society. We’re told that we don’t know how to meet collective needs. But now everyone has a new job. After a week that feels like years, it turns out that ordinary people have the capacity to solve our own problems. Here is the principle: that the people most affected by a decision should have the most say.”

Ordinary Genius
The reformers would like to regulate the banks, tax the rich, and go back to a progressive tax system. Is this as much as we can hope for? During the American revolution there was a right wing and left wing. The right wing (of course) won. Thomas Paine, who was on the left, said that in moments of revolution the genius of ordinary people emerges. In NYC I met a young woman in her 20s who volunteered for the clean up, little did she know that this would become a central concern when city officials, responding to the park’s Canadian owners, threatened to clear the park in order to clean it. This young woman mobilized 2,000 people to show up at 8am and clean up the park. Even though she’d never done anything like that in her life.

In this movement there’s an effort made to make everyone a leader – so clean up is as important as facilitating discussions. Social justice leaders of the past have been distinguished by being able to speak loudly with articulation, but here no one is permitted to speak more than two minutes, so these apparent advantages are evened out. Be the Change
Non-violence has been at the heart of the Occupy movement. They aren’t providing the spectacle of broken cars and windows that the media crave. They haven’t responded to the sometimes brutal police force used against protestors with force of their own. If we want a new society we have to be the change. Don’t tell me anymore about the I-Phone, the I-Pad… what about the We-phone, what about us?

Ronit says that when she first entered St. James Park she was confronted with fears she had internalized, particularly after the brutal events of last summer’s G20. We all remember what the police force here is capable of. How does money, hierarchy and violence live in my body? I went to the park wondering: who is in charge here? Who is going to protect me if things go wrong? And the answer? No one. The scenario allows you empower yourself. You have two feet and a heart to stand on. Come to the park and feel what is going on inside yourself and outside of yourself, and pick one thing and decide what you’re going to contribute.