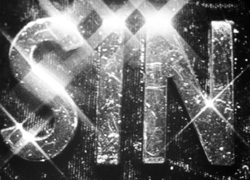 His work had been dubbed “structuralist” by reigning avant writing dean P. Adams Sitney, an unfortunate term which might be better named “conceptual” as in, conceptual art film. Another indelicate term. But while Landow’s movies (he later changed his name to Owen Land because he was intent on getting land) were interested in the stuff of movie making itself, he was more concerned with the Christian conversion experience, a moment which he replayed and parodied and obsessed about, in movie after movie. In No Sir, Orison! this moment comes in a supermarket. In Wide Angle Saxon it arrives after falling asleep watching a dull fringe movie, the applause is enough to do it. His A Film of Their 1973 Spring Tour was commissioned by the Christian World Liberation Front. His witty, playful works are stuffed with palindromes and puns, and create a singularly odd quest for transcendence, as he returns insistently on the frame of the movie theatre.

Two Films by Owen Land (formerly known as George Landow) provides detailed insight into the work of Owen Land. It features the illustrated scripts to the films Wide Angle Saxon (1975) and On the Marriage Broker Joke as Cited by Sigmund Freud in Wit and its Relation to the Unconscious or Can the Avant-Garde be Wholed? (1977-79), complete with footnotes which untangle their elaborate web of references. Reading far beyond the two films alluded to in the title, it also includes a new interview, annotated filmography and recent essays by the artist.This publication has been made possible by the kind diligence of Mark Webber, someone who, like Land himself, can’t keep himself from believing.