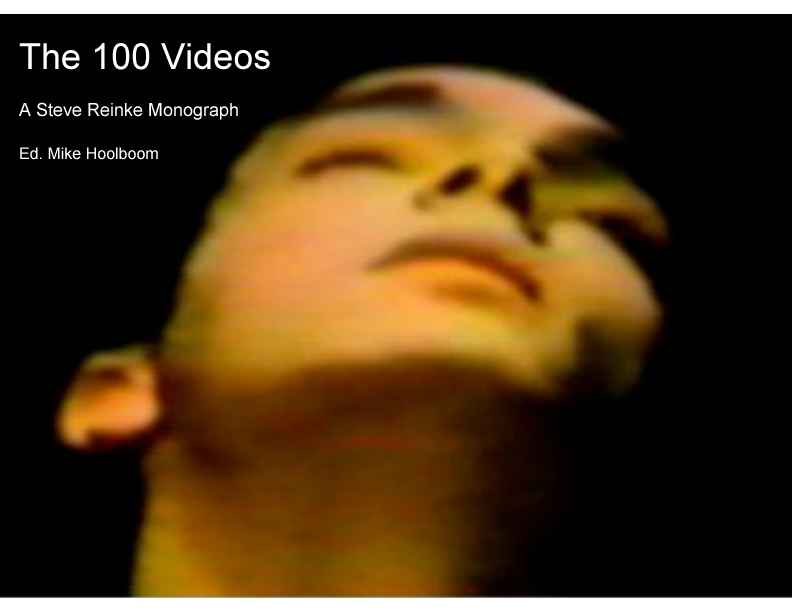 One mystified audience member at Windsor’s Media City Fest put it best. After another punishing screening of silent landscape movies, out strolled one of Steve’s candy-coloured, post-pop confections. It was brighter, smarter and harder than anything else in the room. In the requisite post-screening interrogation scrum, he was asked; “Why do you get to talk?” In this world of fringe movies, my once home, words were used by people whose pictures didn’t measure up. If you were clean enough there would be need for language, or even editing. Steve’s chatty works flew in the fact of that unconventional wisdom, and offered permission for new joys to root. The first 25 pages of this monograph are an essay on his first movie, the one that we hoped would never end, which he named simply The 100 Videos. What follows are Steve’s scripts which light up the page with pictures you’ll conjure quickly enough. Steve Reinke Bio
Steve Reinke is an artist and writer best known for his single channel videos, which have been screened, exhibited and collected worldwide. He received his undergraduate education at the University of Guelph and York University, as well as a Master of Fine Arts from NSCAD University. The Hundred Videos — Mr. Reinke’s work as a young artist — was completed in 1996, several years ahead of schedule. Since then he has completed many short single channel works and has had several solo exhibitions/screenings, in various venues such as the Museum of Modern Art (New York), the National Gallery of Canada (Ottawa), The Power Plant (Toronto), the Art Gallery of Ontario (Toronto), the International Film Festival Rotterdam and the Argos Festival (Brussels), Barcelona Museum of Contemporary Art, and the Tate (London).

In awarding the Bell Canada prize for Video Art to Steve Reinke, the assessment committee said: “Steve Reinke is one of the most influential artists currently working in video. With the first installments of The Hundred Videos in the early 1990’s he led a generation away from the studio into a new conceptual fiction. But Mr. Reinke’s contribution goes beyond his important tapes, he is a committed teacher and he has edited and co-edited several important media arts anthologies.”