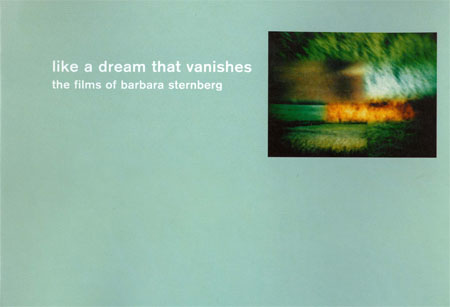 In 2000, I arranged for a retrospective of Barbara’s work at the Images Festival, and a small monography to accompany it. The crowning mystery would be a new movie, Like a Dream That Vanishes, and when we saw it everyone fell in love with her all over again. This publication gathers up some notes and musings on her 16mm film work which uses the hand-cranked Bolex camera as an instrument of philosophy.

Like A Dream That Vanishes: The Films of Barbara Sternberg
Published by Pleasure Dome & The Images Festival of Independent Film and Video
Edited by Mike Hoolboom
2000, 68 pages

I Can See Your History In The Way You Move by Karyn Sandlos – 8
Opus 40 by Larissa Fan – 11
Transitions by Mike Zyrd – 12
Trilogy by Andre De Palma – 13
Tending Towards the Horizontal by Robert Everett-Green – 14
Transitions: Sternberg in the 80s: an interview by Mike Hoolboom – 15
Perception Through Process by Tim Dallett – 27
Living the Everyday as History by Barbara Godard – 28
Beating by Jeffrey Lambert – 34
A letter to Barbara Sternberg by James Baker Hall – 35
Panorama: Four Films by Barbara Sternberg by Rae Davis 36
Between the Eyes: Human Vs. Techno by Maria Ramadori – 42
Midst by Gerald Saul
Pecking: Sternberg in the 90s: an interview by Mike Hoolboom – 45
Re:Surfacing by Tim Dallett – 53
Glimpses and Glances: The Search for Meaning in Barbara Sternberg’s Films by Barbara Goslowski
Like a Dream That Vanishes by Janine Marchessault – 61
List of Works (1981-1999) – 65
Biography – 66
Contributors – 67 Barbara Sternberg biography
Toronto filmmaker Barbara Sternberg has been making films since the mid-seventies. Her films – Opus 40 (1979), Transitions (1982), A Trilogy (1985), Tending Towards the Horizontal (1988), At Present (1990), Through and Through (92), Beating (95), C’est la Vie (1996), Awake (1997), midst (1997), Like a Dream that Vanishes (1999), Burning (2002), Surfacing (2004), Praise (2005) – have been screened widely across Canada as well as internationally at the Pompidou Centre in Paris, Kino Arsenal in Berlin, The Museum of Modern Art and Millennium Workshop in New York, and the Ontario Cinematheque, Toronto. Her work is in the collection of the Art Gallery of Ontario and the National Gallery of Canada. She has been a visiting artist at a number of Canadian universities and galleries including the University of Guelph, Nova Scotia College of Art and Design, Dunlop Art Gallery as well as the Universite d’Avignon, and the School of the Art Institute of Chicago.

Sternberg has been active in a number of fronts in Toronto, teaching at York University, working for Canadian Filmmakers’ Distribution Centre, serving on Toronto and Ontario Arts Council juries and committees, helping to organize the International Experimental Film Congress (May 1989), and was a founding member of Pleasure Dome, artists’ film and video exhibition group. She wrote a handbook and conducted workshops on Media Literacy for high school teachers. She recently organized the “Association for Film Art” (AFFA) to actively support and promote awareness and appreciation of film art. While living in the Maritimes, Sternberg co-founded Struts, an artist-run centre in Sackville, New Brunswick.

Sternberg wrote a column, “On (experimental) Film” for several years for Cinema Canada, and has written essays on artists and on filmmakers. As well, she has written on the status of film art in galleries and museums—an issue on which she has conducted symposia and lobbied vigorously.

Although her main practice is film, Sternberg has worked in other media including performance and installation: recent works include Women and Violence, a group quilt organized by Penny Stewart (1990), The Habit of Freedom, an installation for Our Home: Native Land (1990), Let Us, a continuous play video tape for OKANATA exhibition (1991), the hologram Hollywood (1994), Surge (1998) a collaborative installation with Rae Davis-film loops, video projections and sculptural elements. Since 2000, she has made a number of videotapes including: Off the 401, For Virginia, New York Counterpoint, Glacial Slip, In the Garden, Tabula Rasa, So What, and a CDROM, Iluminations: a Book of Letters.

Check out Barbara on the web: www.barbarasternberg.com