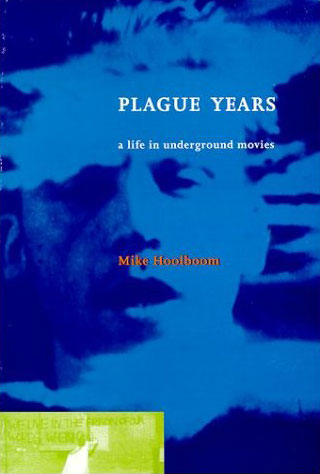 Video scripts and original writings by one of Canada’s most prodigious filmmakers. With more than forty challenging, sometimes brilliant, films to his name, Mike Hoolboom is Canada’s most important filmmaker since Michael Snow. He’s won the Toronto International Film Festival prize for Best Canadian Short Film twice in three years. Rendered on celluloid or on paper, Mike Hoolboom’s daring artistic vision just might be the most compelling of his generation… Plague Years is a reminder of that wonderfully uncomplicated pleasure of remembering what it felt like to discover movies for the first time.” (Peter Goddard, Toronto Star).

“A compendium surveying nearly forty film scripts, essays and microstories by renowned filmmaker Mike Hoolboom, Plague Years impressively represents his summa to date. In spite of his frequent use of “I,” it is not, strictly speaking, an autobiography. There remains a strong fictive element throughout – his artistic license, naturally. Hoolboom’s mellifluous prose ranges from the script for his imageless film White Museum to a revealing letter to Madonna to the poignant anti-AIDS Letters from Home. His themes shift from the light and filmic to the sombre and serious. Exquisitely designed, Plague Years includes an annotated filmography , with sources and writers as diverse as renegade philosopher Alphonso Lingis and local critic Geoff Pevere.” (Ger Zielinski, Parachuse, 1999)

“This is an important book: a moving and compelling chronicle of the creative process. Hoolboom explores a range of responses to AIDS, leading us, ultimately, on a spiritual journey.” Laura U. Marks, Simon Fraser University

“It’s safe to say that Mike Hoolboom is now Canada’s most renowned and influential “experimental” filmmaker. Prolific and mercurial, he has produced well over fouty films, consistently employing new techniques and genres but just as consistently, rigorously en, exploring the thematic terrain of desire. Now YYZ has published what could be termed a catalogue raisonee (or maybe a greatest hits collection) of Hoolboom’s work, composed of the texts or scripts for Hoolboom’s films accompanied by stills from each respective work. Without the moving images that they were initially paired with, these pieces (34 in total) read like short stories, or, occasionally, academic essays. Somewhat surprisingly, the words often do not recall the films that they were once part of, but produce a whole new set of images – a tribute to Hoolboom’s skill and versatility as a writer. A beautiful, provocative and profound book.” (Jason McBride, LIFT Newletter)