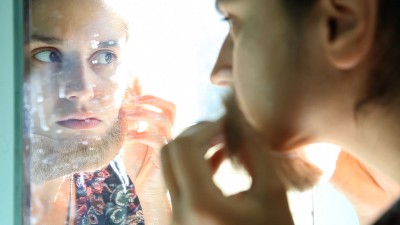 “After a purported bike accident, the nameless amnesiac undertakes audio-visual therapy by producing a series of one-minute shots through the streets of Toronto. The result is an episodic love letter set against the city’s intimacies and haunts, populated by old and new acquaintances, while the disembodied voiceover weighs in on gender, animal, and the end of literary culture. Beginning from the position of the body in fugue, Incident Reports traces the most intimate of daily life changes through chronicling a back beat of the city’s endless transformation.” Amy Fung, Images Festival

“For an exploration of Toronto itself, check out Mike Hoolboom’s Incident Reports which marries a series of fixed shots of Toronto life – each around a minute in length – to a philosophical voice-over. The result is an evocative portrait of an individual disconnected from his community and seeking a way back in – which Hoolboom provides in an utterly unexpected (and delightful) way.” Norman Wilner, NOW Magazine

“Images Festival offered another reflection on everyday life in Toronto filmmaker Mike Hoolboom’s enjoyable essay film Incident Reports. Perhaps best described as a work of docu-fiction, Incident Reports presented a series of one-minute takes pulled from the filmmaker’s daily existence. The premise of the film advised viewers that the disembodied narrator was fulfilling an assignment from a therapist to help him restore his memory following an alleged bicycle accident. As Hoolboom took his camera around Toronto, the film afforded the sense of seeing one’s community through fresh eyes as the narrator speculated about the habits of his neighbours. Hoolboom’s act of filming like a cinematic flâneur stressed the awkwardness of attempting to create relationships in a city as cold and detached as Toronto. His camera invaded public spaces and caught random Torontonians avoiding the camera’s glance just as they do in elevators and the subway. As the meta-filmmaker gradually regained his sense of self, and, in turn, developed a bizarrely sexual relationship with the unseen therapist, Incident Reports humorously allowed audiences to remember what it felt like to be a part of a community as citizens took to the streets to sing Culture Club in unison. The screening was one of the stronger and stranger sights at Images.” (Pat Mullen, POV Magazine)

After a bike accident, the amnesiac undertakes audio-visual therapy by producing a suite of one minute shots. The voice-over weighs in on gender, animals and the end of literary culture. A love story essay featuring Elvis, wrestlers, boy ballet, naked cyclists and the heavenly voices of Choir Choir Choir.

“What we are determined not to know frees us and forces us to know something else.” Adam Phillips

Running in the Muddy Twilight, Pasolini
Yet the passerby looking on
without the innocence of need
sought, as a stranger, communion there,
at least in the joy of passing and looking.

If you live in Toronto and have friends in the arts, they were likely busy last week. Most of the local art world were attending the screenings, gallery shows and live presentations launched as part of the Images Festival. Now in its 29th year, Images is the largest North American annual festival for experimental and independent film and video.

Few screenings saw greater demand than Mike Hoolboom’s sold out Incident Reports. Even press, such as myself, were put on a waiting list. This wasn’t exactly a surprise: the Toronto-based filmmaker is an influential figure in the Canadian film and media scenes. He’s not only had a prodigious output that’s warranted retrospectives at festivals worldwide (including Images), but is a co-founder of the exhibition collective Pleasure Dome and was the first artistic director of Images (2000).

The seventy-minute digital video, narrated by Hoolboom as an anonymous amnesiac, cycles through intimate one-minute shots of Toronto, done as part of the amnesiac’s prescribed audio-visual therapy from a harrowing bike accident. At first, the work revels in the city’s everyday moments, like families taking selfies in High Park during cherry blossom season or naked cyclists getting ready for a Critical Mass bike ride. “I can only see what my camera sees,” says the narrator, who is heard but never seen. “My eye is taking in the whole neighborhood.”

The work soon zooms in on Toronto’s rapidly changing landscape — the “Six” that Drake has so successfully lifestyle branded, despite all the mixed feelings that accompany this still somewhat gawky swagger. We see the loss of literary culture, as attested by local bookstores like Book City on Bloor or Chapters Indigo at Richmond and John go out of business. The evocative and deeply heart-felt work unspools the eventual narrative around the shifting languages of desire: as the amnesiac becomes more attuned to the changing city, he falls for his therapist, who we then learn will adopt the gender neutral pronoun “they”.

I found myself, along with many in the audience, riveted by Incident Reports, so when the film started to freeze during the last ten minutes, it disrupted the whole experience.

At first, it was just a hiccup. But by the time the film reached its beautiful twilight-lit closing sequence of local choir group Choir! Choir! Choir! singing a cover of “Karma Chameleon” on a residential street in Little Italy, it was freezing every fifteen seconds. (At this point, I was counting the freezes like labour contractions.) This brought about varied reactions from the audience: spurts of nervous laughter, the sound of bodies squirming in their seats, even the filmmaker jokingly yelling out from the second row, “you’re so close now!”

Immediately after the lights came up amid the warm applause — there was a collective relief that the whole fiasco was now over — I saw artist and festival juror Greg Staats abruptly get up from his front row seat to exit. His haste to leave before festival executive director Heather Keung could bring Hoolboom on stage for the Q&A sent a clear message of disgust. The first question lobbied to Hoolboom during the Q&A hosted by Keung came from local artist Hillar Liitoja, who cut to the chase: “Did you like the technical fuck-ups?” Hoolboom took it in stride: “You used to have commercial breaks,” he says. “This is what the avant garde has.”

Hoolboom added much needed levity to the room, but as someone who dedicates a significant amount of time to covering the avant garde (whatever that is), I think it’s a mistake to paint an un-viewable screening as inevitable—particularly at a festival that bills itself as the largest in North America geared towards experimental media. It undercuts the achievements that have been made and more importantly those that still need to be made.

Certainly, it runs the risk of undermining the significant achievements of Hoolboom’s own work, which offers no small gains. His work, as well as others included in the festival’s On Screen programme, are initiating necessary dialogues around access and the urgent identity-driven concerns of the city’s varied communities. (The festival comes at the heels of the Black Lives Matter tent city protest, and the public furor over the “not guilty” verdict of former CBC radio broadcaster Jian Ghomeshi.) Ever since artistic director Amy Fung succeeded interim artistic director Kate MacKay in 2014, Fung has made it her agenda to show how works that fall into the categories of “experimental” and “alternative” are shaped by the socio-political. On top of last year’s hiring of new executive director Heather Keung, former artistic director of the Reel Asian film festival, there’s been a major change in guard that I’ve welcomed. The programme book’s cover, a still from a commissioned 3D artwork by Oliver Husain, says it all: a black woman, in 19th century period costume, staring directly with red-cyan binoculars. Inclusive programming is being made a priority, as attested by the addition of new two guest shorts programs: the sold-out Black Radical Imagination and Conundrum Clinique, a survey of Toronto artists programmed by local curator Jon Davies, which did a better job than the Art Museum’s own recent survey in examining the city’s urban ennui through its culture of consumption.

The biggest strides include new co-presenting partnerships with institutions like the Aga Khan Museum and Harbourfront Centre (the venue for last Saturday’s closing night performance of Juliana Huxtable’s MoMA/Performa 2015 commission, There are Certain Facts that Cannot Be Disputed). A city-wide gallery art crawl kicked off the Festival on April 14, speaking to the Festival’s increasingly robust Off Screen programme that involves galleries from downtown’s 401 Richmond building and further in the west end.

All of this makes dwelling on the last ten minutes of Incident Reports a huge drag. Indeed, I might not have even bothered if the technical difficulties had been limited to one night. They were not. During the Emily vey Duke and Cooper Battersby April 16 retrospective at Jackman Hall — a duo known for work infused with awkward sincerity — there were similar freezes. An intermission was called to fix the issue.

There were whispers that most of these issues could be blamed on Jackman Hall, an AGO theatre that apparently needs an equipment upgrade. But the Hoolboom screening was at another venue, Small World Music Centre at Artscape Youngplace. An AV technician I chatted with after the Hoolboom screening speculated they were “obviously using files where the data rate exceeds the ability of playback.” When files exceed their data rates, they’re problematic when played on a laptop: the core freezes, the files stop, and no amount of buffering will solve the problem. (I was told that this issue is often resolved with AJA KiPro body.)

“It’s embarrassing for the festival, artists and even audience that this happened,” he says.

When I reached out to Images for comment, Communications Coordinator Aidan Cowling provided the following official statement: “After spending an entire year in building up a 10 day festival, it is disheartening to see technical issues that are beyond our immediate control. We are more than aware of the disruptions of rhythm and flow, specifically with our ON Screen programming and have apologized to our festival guests and artists. Obviously we are disappointed, but a festival’s momentum is greater than minor setbacks.”

Images will run a second PWYC screening of Hoolboom’s Incident Reports this Wednesday at Innis Town Hall for 7:30PM.