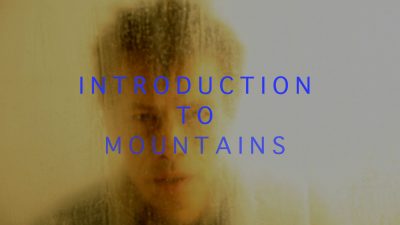 You feel so far away, and so close.
As if I could reach out and touch you,
as if this screen were not a barrier but an invitation,

I wanted to invite you to watch this small movie I’ve made
which means: to allow yourself to be seen

to open your face, and allow some of these sounds and pictures
to accompany you.

Sometimes you make movies as if you were still young
you stand on top of the mountain and throw lightning bolts into the projector.
But as we get older, we are more often in the other place
at the bottom of the mountain.
It’s hard to get up in the morning,
as our national poet liked to say
I ache in the places I used to play.

There is also a song that belongs to the bottom of the mountain.
It is a very small song, sometimes it’s so quiet
it can hard to hear. Or else it arrives in a language that is difficult to understand.
It can be too loud, too angry or hurt, bruised or broken.
Please, won’t you join us at the bottom?

title: There Are Mountains Hidden In Mountains