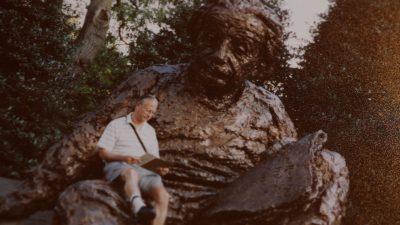 In a series of 27 vignettes, the artist offers up memories of his father who died in June 2017. Using a mix of family footage (including two catastrophic moves, the last to a nursing home), snapshots and found footage, a portrait emerges of a genial ghost father, haunted by a war that sent his own father to a concentration camp, and which finally impelled his own move to Canada.

“Canadian Mike Hoolboom’s 27 Thoughts About my Dad also deftly processes a challenging past that takes in colonialism, war and migration through deeply personal delivery. This is a meditation on Hoolboom’s elusive but caring relationship with his often silent father who recently passed away. The soundtrack extends a eulogy delivered at his funeral. Through a mixture of found footage, home movie and family photographs we gain insights into family life. The images and thoughts are all neatly arranged in place, like a well-ordered Dutch home. Much is left unsaid, but each of the 27 thoughts leaves gaps and hesitations fertile for post-screening rumination. This is the airing of an open wound altered and neatly folded through its presentation. Hoolboom’s critical practice is a rejoinder to the conundrums history dealt his father and how his father lived out his responses. In this way we become a response to our parent’s absences. We can now look back on all of Hoolboom’s cinema with this insight in hand.” Dirk De Bruyn, The Unspeakable Finds Voice, The 48 International Film Festival Rotterdam, Spring 2019

“Mike Hoolboom reflects in 27 brief scenes on the life of his father, who died in June 2017. Using home movies, snapshots and found footage, he creates a portrait of a exceedingly clever, yet evanescent father figure haunted by the war that sent his own father to a concentration camp. Ultimately the family moved to Canada. This political history, intertwining dreams and personal experience, seems loose and associative, but first impressions can be deceiving.” International Film Festival Rotterdam