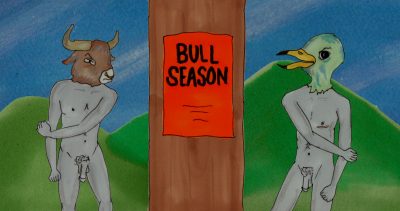 intertitle: Language, not territory
was the prime cause of aggression

Voice over by Alexandra Gelis
This was the fantasy. That we would be able to see out of every part of the body. That we could turn our shoulder blades, even our fingers, into eyes that could see.

And then the image, which separated us from the world, from the world that we kept turning into an image, would now appear more like our own bodies, fluid and flowing and alive, as if we belonged there.
In this new cinema, which is now nostalgic and forgotten, we would learn to look with our whole body.

titles: You do not have to be good.
You don’t have to walk on your knees
For a hundred miles in the desert, repenting.
You only have to allow
the soft animal of your body
to love what it loves.

Voice over by Johanna Householder
At this point a few of your friends have probably killed themselves.
Or you’ve been assaulted or in a bad car accident that’s left you with permanent mental or physical trauma.
Maybe you’ve lost a parent, or a sibling to cancer. Or maybe you haven’t. But you’re about the age where you start figuring out.

intertitle: Where can I free myself of the homeland in my body?

Voice over by Heather Frise
We all have different ways to deal.
Some are busy with the movement, trying to lend a hand.
Most vote for capitalism.
Others totally lose it and get into shitty prog rock bands and start chipping meth or speed. Or even both, but how would that work?

intertitle: The sentence structure of many languages, including English, depends on and reinforces a split between the active voice and the passive voice.

Voice over by SoJin Chun
Personally I dealt with it by making art no one cares about and shaving all my hair off.

I write shitty poetry and smoke a lot. But after all I’ve been through—two assaults, losing a parent, picking up a drug habit, developing and dealing with mental illness—I’ve also learned to dance before the music starts.

intertitle: I have learned and dismantled all the words in order to draw from them a single word: home.

Voice-over by Julieta Maria
When I was nine the friends of my parents would lean down to me and say, “It’s going to get better.” Learning to enjoy whatever you can before it supposedly gets better is like dancing before the music starts.

There’s no beat,
you don’t know when it’s going to start or even what it’s going to play,
you just let your soft animal body
love what it loves.

titles: Whoever you are, no matter how lonely
the sun moves across the mornings
the wild geese are heading home
announcing your place
in the family of things.