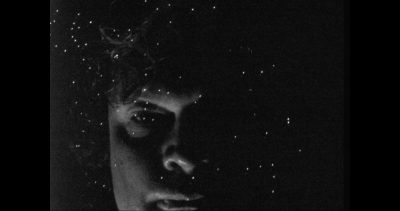 It might have been called “Leaving Home,” only the homes I’ve spent too long in had become churches, places where I worshipped the old ideas and cultures, the crust of habit.

It begins in starlight, with black and glowing stars. A trip follows, the golden ascent Campbell called it, this is how it might appear to others, but for the one on the way it requires a second motion underground, where you lose everything but the next step, and receive the blessing granted to those who have nothing left. This gift (it’s a kind of knowing or feeling) is the yield, the thing that can be shared and known and celebrated. But this movie is not about the golden harvest, instead it looks at the subteranean passage itself, which it delivers in light and shadow, first on a flickering ground, then aboard a ferry which shuttles between worlds, and then at last in the deep city, where the traveller re-enters the world.

The movie is also a moving image letter, a one-way correspondence and good-bye.

The voice-over text borrows a note from Rainer Maria Rilke’s iconic “love the questions” riff from Letters to a Young Poet (1929).