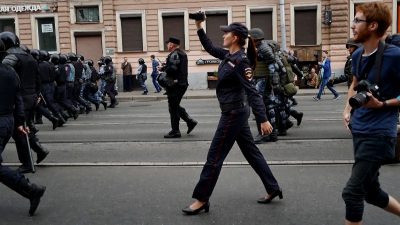 Prelude
Image: man face close-up in bed blurry
When I’m with him

Image: train commuter shadows blurry
I can’t recognize myself anymore.
It was time to leave the wax museum
or to step into it.

Image: woman with truth sign
vo: Adorno told us that we become human
only by imitating others.
That’s why I’ve decided to come here
to Saint Petersburg.

Image: canal water
vo: Like everyone I put on my best mask
to watch the races
cheering for both sides.

Image: subway entrance silhouettes
vo: I follow strangers in the city.
They are my map and introduction.
Their bodies, this public choreography
makes me feel my unwanted body
and I am grateful.

Image: people in stuffed animal costumes
vo: The city maps the inside of the museum
to the outside.
All the best paid workers
have to appear in public
with a smile on their faces.
I’m starting next week.

Image: smoker at night
vo: In the 90s he was a gang member
he beat up strangers, kids really
who couldn’t pay him to stay
inside the wax museum.
Now he sells real estate.

Image: kids blue gym outdoors through fence
vo: These bodies pose a question.
How to be ready?
Like them, I never stop training
but after the revolution
it’s harder to prepare for the unexpected.

vo: It turns out the best part
of the Wax Museum wasn’t inside at all.
It was the voice of the announcer,
the pictures he made out of words.
The prison house of language.

Image: Police demonstration in Saint Petersburg
vo: When I’m afraid
my fear makes everything appear
as if it’s moving backwards.

Maybe the only way to have a self
is to have a state,
or even a neighbourhood, a single street.
We’re here to make a public space
that is also a private space
a country without borders.

Image: man in chair wide-eyed
vo: A few hours later.
After the demonstration.

Image: woman in bookshop
vo: After the last demonstration
I couldn’t hide behind my face any longer.
Since gangster capitalism it’s been hard
not to fall in love with the police
who live inside me.
But I’m trying.
My new friends will be out of jail soon.

Image: woman in window on phone

Image: woman in church
vo: Every stranger’s face is my face.
Like her, I used to look up all the time
to men, to the new Russians
but I’m learning to keep my eyes in front of me.
Somehow they are leading me back
to the face I had leaving the museum.