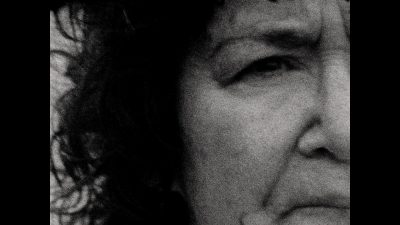 “Second-wave feminist, radical activist and journalist Judy Rebick, who spent decades providing a platform for voices that needed to be heard, allows focus to shift to her own life in this deeply personal and visually experimental biography.” Hot Docs Festival

“Mike Hoolboom, a filmmaker who has created a rich and singular filmography, builds a portrait of a friend, a letter of love and admiration, and a sensitive immersion into a unique life.” Cintia Gill, Sheffield Docs

“Mike Hoolboom strikes again with another hyper-sensual and dreamlike film made as if by an angel. It’s a biography which leans so easily into the universal that it transcends any individualizing attachments. First part of a new series dedicated to struggles against capitalism, Judy miraculously manages to make us glimpse a future with a tinted optimism of anticipation.” WarMMachine

“A flow of radical images builds up the powerful portrait of feminist activist and journalist Judy Rebick, one of the most influential rebel voices of 1970s progressive Canada. A strong advocate of pro-choice rights for women, alongside Doctor Henry Morgentaler, Judy Rebick waged epochal wars, guided the biggest feminist organization of Canada in the 1990s, and fought alongside the last against neoliberal capitalism. The evocative, poetic and impressionistic film depicts the personal, honest, inner – and thus intrinsically political – battle of a woman gifted with a great strength but also tormented by the demons of an unresolved past, with severe bouts of depression difficult to overcome. Using super 8 footage, the six-part film focuses on episodes of Judy’s public life and shows how any political discourse on vulnerability developed against the victimization of women and in favour of their speaking up must go through uncompromising research on and awareness of one’s personal identity. Ludovica Fales, Festival dei Popoli

“Mike Hoolboom’s moving portrait of his longtime friend, legendary social activist and author Judy Rebick, artfully fuses different cinematic and narrative strategies, combining political history and confessional, the atmospheric and the ruminative. Judy Versus Capitalism recounts Rebick’s extraordinary impact on Canada’s politics, including her work helping to build the National Action Committee on the Status of Women, her writing and broadcasting, and her ceaseless advocacy on a wide range of crucial issues. Indeed, at times Rebick emerges as a kind of leftist Pynchonian character who’s eerily present at the most pivotal moments — from her involvement with the Waffle caucus to when she prevented an assailant from stabbing Henry Morgentaler as he opened his abortion clinic in Toronto. Hoolboom seamlessly links this history to Rebick’s own struggles with physical and mental health, most notably dissociative identity disorder, a condition she has been extraordinarily courageous about discussing. Few films have shown how the personal and political are intertwined so effectively, and fewer still have managed to be poignant, harrowing, and yet affirmative.” Steve Gravestock, TIFF Top 10, 2020

Radical feminist, street fighter, practical dreamer. This lyrical doc, shot in super 8, recounts Judy Rebick’s pivotal role in securing women’s rights over their own bodies in Canada. She lays out the key tenets of second wave feminism, even as a family time bomb threatens. The film closes with a harrowingly personal account of a divided self, and a startling embrace of mental illness as creativity.

“Judy Rebick is an iconic figure in feminist struggles in English Canada. Of all the fighting, this communicator became famous in 1983, the day she blocked an anti-choice activist who wanted to attack Dr. Henry Morgentaler with a knife. But beyond this deplorable incident, Ms. Rebick has carried the voice of Canadian women for decades, while embracing causes stemming from injustice. Documentary filmmaker Mike Hoolboom delivers a portrait that is both social and intimate, vibrant and rich in archival scenes.” La Presse, Montreal

“In his latest documentary, Judy Versus Capitalism, Mike Hoolboom examines the life and work of his friend Judy Rebick, a noted feminist and anti-capitalist activist. Divided into different chapters and running at a brisk 62 minutes, the film employs various experimental techniques in the telling of Rebick’s unconventional life. The documentary searches into the depths of her abusive childhood to her continued political activism today, but above else, it’s a loving portrait. In terms of rapport and aesthetics, it feels imbued with warmth and intimacy. The film’s textured shooting style and the heavy use of layering images serve a variety of purposes. It mirrors Rebick’s ways of thinking and experiencing the world and has the impact of confronting and tearing down the conventions of commercial cinema. It’s only fitting that an anti-capitalist portrait should discount the narrative and pacifying techniques of mainstream movies.

While experimental, the film is never alienating. Rebick stands tall as such a compelling figure, whose consciousness imbues every frame, that her charisma rides us through some of the more obscure sequences. She’s a candid and powerful speaker, utterly unafraid to lay her heart on the line. Without needing to spell things out in a neat timeline, Judy Versus Capitalism similarly showcases the genuine change that feminist and activist groups enacted in Canadian society, and how their work continues to this day. It’s a film that affords the audience empathy and thoughtfulness, allowing us to come to our own conclusions without being guided along. The documentary should be especially interesting for audiences interested in cinematic portraits and protest movements.” Justine Smith, CULT MTL

“Judy Rebick has always lent her voice to those who need to be heard. Since the 1970s, she’s been a vocal advocate for a more progressive Canada. A second-wave feminist, writer, journalist and radical activist, Rebick worked closely with Dr. Henry Morgentaler and the pro-choice movement and led the largest women’s organization in Canada through the 1990s. Decades of advocacy and living in the public eye coincided with her personal challenges with mental health, stemming from childhood trauma. Teaming up with filmmaker and friend Mike Hoolboom, they collaboratively revisit the past through six chapters of significant moments of Rebick’s life. Archival footage and Hoolboom’s impressionistic Super 8 film aesthetic punctuate her storytelling, which is both achingly honest and endearing. Her impassioned mission to bring about change and oppose neoliberal and conservative ideologies, along with her journey to come to terms with her own identity, show that the personal is most definitely political.” Alexander Rogalski, Hot Docs

“Judy Rebick is a seminal, local Toronto feminist figure on the forefront of the Pro-choice movement in Canada since the 1970s, who went on to head the biggest women’s organization in Canada in the 1990s while wrestling with her own personal triumphs and tragedies. This reverent, experimental portrait of an iconic Toronto figure touches on her struggles with mental health and childhood traumas as she becomes a pivotal figure in Canada’s progressive movements. Director Mike Hoolboom presents a poignant portrait of Rebick using her own words layered with striking Super-8 footage, contextualized within a stream of consciousness that chronicles Judy’s iconic moments in Canadian history with a lens on her own personal histories and internal landscape. The rhythm of this portrait mimics the ebbs and flows of the effects of mental illness on life while capturing the strength and resilience of an incomparable human in unprecedented times.” Rendezvous with Madness Festival

“Judy Versus Capitalism works, and quite beautifully. The doc manages to convey landmark moments in Rebick’s activist past, while also delving into her more recent, personal revelations. Hoolboom artfully shifts between Rebick reminiscing and his poetic montages, which play out like dreamy flashbacks. It’s a triumphant experimental/documentary hybrid. It is also clear that filmmaker and subject share an investment in a basic concept in feminist philosophy and activism: that the personal is political, and vice versa.” Matthew Hays, Point of View Magazine

A bio-doc about my pal Judy Rebick: iconic second wave Canadian feminist, radical activist, journalist and writer. She is the founding publisher of rabble.ca, Canada’s irreverent progressive online news source, and a former president of the National Action Committee on the Status of Women, Canada’s largest women’s group. Shot in kinetic bursts of super 8, the only voice is Judy’s, impelling a trek through a devastated family, the struggle for women’s right to choose and the challenge of neo-liberalism. A series of six public moments (marked by speeches and TV spots) frame the six-part episodic fracture.

“Since the 1970s, Judy Rebick has been at the forefront of feminist struggles in Canada. To Mike Hoolboom, she’s nothing less than a “living archive” of her era’s activism and battles for the rights of all minorities and marginalized people, and an exceptional woman who has overcome deep personal traumas all her life. Their unique relationship gives rise to a rich film – an imaginative hybrid experimental documentary. Its foundation is an impressive collection of archival material and Super 8 footage (including famous incidents like the attack on Henry Morgentaler in 1983), edited, re-edited and reworked, presented in six chapters linked by poignant narration.” Festival du Nouveau Cinema

“Feminist, activist and journalist Judy Rebick has been a major representative of progressive Canada since the 1970s. She campaigned vigorously for the right to abortion and in the early 1990s headed the biggest women’s organisation in Canada. In her memoires, she reveals how periods of struggle were interspersed with bouts of serious depression, the cause of which can be traced back to childhood traumas.

In this essayistic portrait of her made by experimental filmmaker, friend and kindred spirit Mike Hoolboom, an eclectic visual collage accompanies Rebick’s voice as she reflects on political and personal themes from her life. The chapters open with moments from her public appearances, with impressionistic Super-8 footage evoking facets of her experiences. The resulting fragmentary chronicle of half a century of political struggle against conservatism and neoliberalism is also the story of a strong woman who, in revealing her personal history, performs her most revolutionary deed to date.” International Film Festival Rotterdam

“It’s such a beautiful and memorable film; so much comes back to haunt me. The slow-mo of the sequence in which the man attacks Morgentaler and Judy intervenes and we feel the upwelling velocity of her will and strength. The whole section on the others/alters was profoundly moving and not sensational or sentimental but embodied and painful as it should be. The final sequence of Judy canoeing and speaking of the shame of speaking out and her pride in doing so. There’s something you capture in her face in these moments that allows us once again to see her anew. In a traditional documentary she might be mostly a talking head but in your film I feel her embodied and then embodied again in the landscapes of her activism, in the streets and the crowds and the relational energy that are so much a part of who she is. We can feel her drawing energy in that dynamic even as you create new landscapes and lenses through which to see her, we are welcomed into new intimacies.” Catherine Bush