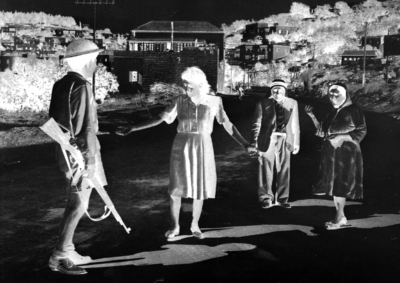 The camera is pointed down the road, standing at the crest of a hill, looking just like the soldier might look, as if they were a pair of eyes, a teamwork of seeing.

The soldier’s skinny legs don’t fill those man pants, the helmet looks uneasily perched, as if it were designed for someone larger, not this boy with a gun, which he grips well down the stock, as it to reassure his audience, and himself, that there won’t be any shooting here.

What kind of street asks children to wear uniforms? If we put this question to Jesus, who was mysteriously born in this ghost geography, he might point at the Romans, who gave way to the Muslims, Crusaders, Sultans, the Ottoman and British Empires, and then the Israelis.

What’s usual in pictures like this, is to make the work of the empire invisible. The occupation should appear natural, even ordinary. So the harmless soldier keeps his gun down, while his companion raises his weapon high in order to take a picture that will stage the occupation.

What’s usual in pictures like this, is to make the work of the empire invisible. The occupation should appear natural, even ordinary. So the harmless soldier keeps his gun down, while his companion raises his weapon high in order to take a picture that will stage the occupation.

There’s a man standing paralyzed on the other side, wearing a camel-coloured suit that he might have fit in once, before he saw the things that no one should have to see. He can’t look the young soldier in his face because he knows the rules, soldiers are the ones who look, while he is part of the invisible class who are being looked at, put in their place. After what they did to his mother and father, his brother and sister, and right in front of him, he knows his place.

A woman stands on the right side of the frame. Her eyes squint into the sun, trying to bring the intruder into focus, the wrinkle lines of concern racing towards her eyes, her mouth, her whole face bent into the question: what are you… doing here? Because she’s held the soft backs of her neighbours in her hands while they lay dying in fear and disbelief, she’s taken a modest step forward. She knows the cost of that step, she could lose a foot, a daughter, or a house. But the love she bathes her family in pushes her forward. Her fingers lift as if she were at the market again, as if they could all pretend for a moment that she wasn’t an object in the way that had to be crushed, that had to be made an example of.

And then there is her daughter. She’s stepped away from her parents and walked right up to the soldier. Her widespread arms assure him: we have nothing to hide, there are no secrets that haven’t already been told, how long are you going to keep standing in our way? She recognizes his youth, the shoes he hasn’t grown into, the chin that might one day fit a beard. They might have rambled roses together with Perry Como, or moved on up with Mahalia Jackson in the middle school gymnasium. Only he’s not from this neighbourhood, he might own every house on the street, but he didn’t go to school here. So the arms which might have learned to embrace him are forced to proclaim her role of innocence, even as he watches himself become something else in her eyes: the new law, the force of history, the revolutionary government.

The year is 1948. The city is Nazareth, the time is just past curfew, and all over the country Arab villages and cities are falling, as young boys are marched down the streets and massacred.

Blood and soil, destiny, Israel forever. And yet the Palestinians are still standing, even if only in a photograph, as if there were some pictures that could never be erased.