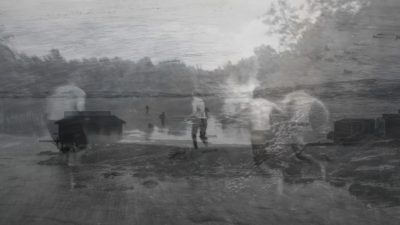 We are Islands script

She wanted to meet the storm.
But there was someone else, a boy, a young man.
He had some beautiful bruises coming in.
The girl’s name was a sharp pain on his tongue.

The storm had left him with even less.
Only then did she notice the tears streaming.

The house whispered to him.
There are other people who don’t leave the island.
Say good-bye to the rest of the world.

Out here the colour of his skin didn’t matter.
She reached out.

Could you be an immigrant of time?

What better way to live
than to open themselves to the land
and invite it to shape them?

As they sat in the chairs
of someone’s abandoned life
they wrote The Book of Storms.

The book’s first line and the last
We are islands.