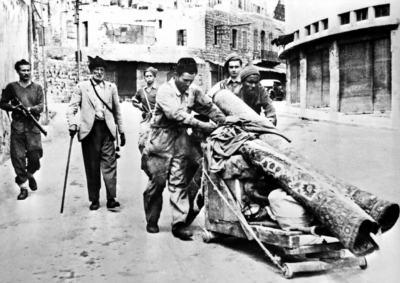 Simon Weil wrote that attention is the rarest kind of generosity. How to extend this generosity to a single photograph, made in 1949 in the port city of Haifa, in the new state of Israel? There are three soldiers from the Haganah watching over a Palestinian father and his three sons. Each face has a story to tell as they take a long walk into exile, feel their homeland in moments that seem to last forever, but are never long enough.

The world is the closed door. It is a barrier. And at the same time it is the way through. Two prisoners whose cells adjoin communicate with each other by knocking on the wall. The wall is the thing which separates them but it is also their means of communication. Every separation is a link. Simone Weil

“I appreciate your visitations to moments past, to photographic evidence of coercion that resulted in the numbers of Palestinian refugees.  The extent my mother repeatedly parroted the state narrative that Palestinians fled of their own volition is challenged by photographs such as these.” bh Yael