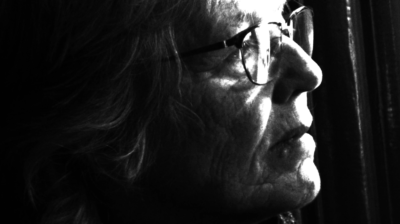 Listening script
00:58 My name is Hildegard Westerkamp and I’m in Vancouver, in my home.

2:21 I think I started piano… I had a teacher when I was 15 who was probably my best ever teacher.

The piano is such an interesting instrument because you think it just makes the music it doesn’t matter what you do. It’s this big machine, right? The idea that my touch could actually change that had never occurred to me.

She was also a listener on many other levels. She also listened to me as a struggling teenager.

I would come to her lessons and we would sometimes just talk. I think what it probably did teach me also: what it’s like when somebody listens to another person. That was an experience I had not really had.

6:40 A soundwalk is an opportunity to go for a walk and listen to everything that you hear.

7:04 What sounds drift up from the valley?
As we’ve become more conscious about ecology being a relationship between environment and person, so in a soundwalk, it is an opportunity to examine our relationship as listener to the environment. And that way you also get to know what kind of listener you actually are.

8:10 We listen altogether in a group. Afterwards, very crucial, we have a discussion about the experience.

8:35 To me a soundwalk is just a framework that you give to others to give the opportunity to get in touch with your own listening.

9:20 The original idea was: Ok, we need to listen to the soundscape because there are things happening there that are not great and we need to change them.

9:45 Listening to your own thoughts is part of this process.
10 We may be so preoccupied we hear nothing of the environment.
10:13 Why?
10: 25 What happened?
10:45 Why are we not listening to Indigenous people? Why aren’t we listening to women?
The soundwalk. At the beginning it was more of an activist thing.
11:17 Just observing how people reacted when they started to listen and talk about the issues. Now people talk about their own experience. The effect the sounds had on them. But what’s not discussed often is… you can get into a more activist mindset where you might want to consider to change things because you notice that they are not right.

12:50 It was at a time in the 70s when we were all… In Vancouver it was just such an intense atmosphere, reinventing the world culturally and politically.

13:05 Co-op radio started at that time. The Western Front started. Video Inn started. All these cultural awakenings everywhere and political too. We were quite involved. My then husband Norbert, we were involved with co-op radio at the same time in the mid-70s.

13:55 I told you about my radio program “Soundwalking”? I wanted to transfer the concept of soundwalks onto the radio medium. So for about a good year I went out recording anything I felt like once a week, for this once a week radio program.

15:38 Because I knew that people block out environmental sound naturally.

I would give the context. The date, the weather, where I was. I would point things. So my voice would be a bit of a mediator between the environmental sounds and the listener.

19:36 With my first piece “Whisper Study”. I had a studio recording of myself whispering “When there’s no sound, listening is most alert.” I had this overlay sound of me whispering with like multiple whispering sounds, and then I slowed that down on our analog, reel-to-reel tape recorders. I suddenly heard this unbelievable sound, a liquid, almost river-like water-like sound.

And then I slowed it down more and more and then I mixed those different speeds together and it produced this river clicking and slurping and I was so absolutely stunned by what I had just found there. I knew nothing of sound processing. It was so exciting I had to leave the studio I didn’t know what to do with it.

21:30 It just made me feel like I had created a sound that you experience when you sit by a creek and you’re hearing all sorts of subtle little things in this creek. You’re even hearing voices and you hear you know, you’re imagining things, your own acoustic imagination flourishes when you listen to a river sound.

22:38 What does an environment actually say and what do you want to say? It’s about relationship again.
Composer and environment are in a constant conversation and help each other. Hopefully.
Because the environmental sound recordings don’t behave like musical instruments.
If you go into the environment you’re dealing with life. And then life upends you. And you cry. Or laugh.