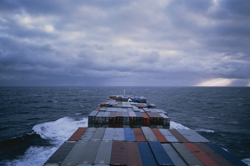 The Forgotten Space by Allan Sekula and Noel Burch 112 minutes 2010
A doc essay on global trade with a special eye on shipping containers, and the global underclass that serves them. From the nearly human-free port facilities in Rotterdam, to the middle-aged homeless in Los Angeles, the filmmakers are careful to weigh the cost of producing wealth. The handsome Dutch rail line dedicated to commercial produce was an ecological disaster and displaced countless farms, and the filmmakers zoom in to ensure that this is also part of the progress report. The exploitation of undocumented Latino drivers in the United States turns out to be part of a systematic import transportation greed network that pays this uninsured underclass less than half the minimum wage and pockets its burgeoning profits.

The filmmakers favour wide shots, it is in relation that their subjects come alive. Trains pass, ships float through endless horizons of ocean water. Bored workers shoot baskets on deck, or rounds of poker down below, trying to keep the numbers from appearing on their faces. Even here, the filmmaker’s voice-over interjects, like a harsh parental reminder, a knife cutting through the naturalness of these unnatural scenes, that the rice these largely Thai and Indonesian workers are eating comes from California, where it is heavily subsidized. This same rice has driven farmers around the world into bankrupted despair, unable to compete with the avalanche of cheap, state sponsored freedom rice. The artists are able to look at each scene, bristling with industrial banalities, and extract some moment of global truth, some salient factoid that unwraps the operations on display and reveals the looming underclass written inside each frame. Yes, it is an old-fashioned, newly fashioned, Marxist movie, with its eye set square on the labourers. In other words, on the body, the cost of the body, the bending and reshaping of the body in an era of global capital. If the new rulers are more distant than ever in their corporate boardroom finery, the costs are only too familiar as entire generations are condemned to numbing cycles of poverty and racism. In a kind of King Midas inversion, everything that this industry of industries touches is turned into shit, every aspect of human interface has been converted into something less than human, and chronically underpaid, and cruelly repetitive. Outsourcing means a race to the bottom, a hollowing out of manufacturing sectors at home, and devastated environments and bad pay abroad. Filipino nannies don’t have time for a personal life. Hong Kong’s boy factories feature products that are married to the clock all day and night, orphans disciplined from an early age for employment in the service industry.

“The synergy of logistics, transportation, and the container, and the very large pool of people who readily are prepared to change their lives dramatically by migrating to areas where they have no family, no friends, and to be prepared to work for 12, 14, 15 hours per day without complaining, with the only idea in mind to make a better tomorrow for themselves and their families or children, has made it possible to develop China the way that it has.”

“An epic view and urgent analysis of the follies of global capitalism, The Forgotten Space is a prime example of essayistic and political cinema. It creates a complex tapestry of powerful images and language.” Special Orizzonti Jury Prize, Venice International Film Festival