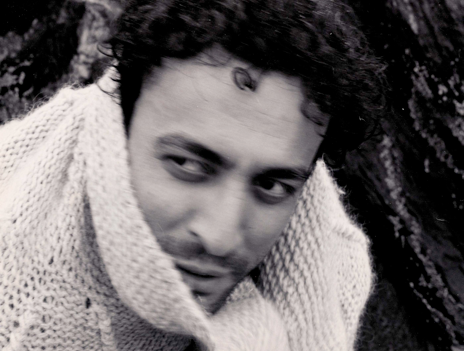 About the Sea 9 minutes 2007
The pictures offer a series of nearly emptied out seascapes, the wide views offering the customary lures of big water dream getaways. On the soundtrack there is a remarkable conversation, which the artist allows to wander through starts and stops, occasionally asking questions about the sea, sometimes slipping into banality and repetition, and then, lured by the intimate domesticity of the scene, the listener is ambushed by the revelation that these voices are Palestinian, and that the horizons on offer are both more tragically particular and more metaphorical, than I could ever know. The sea as national limit, as escape route, as vacation dream, the tropes of this meeting of land and water, this place between, are thoroughly unraveled in the startling juxtaposition of picture and sound. Missing Gaza 13 minutes 2006
A routine oppression fills every frame of this made-in-Ramallah home movie, even though friends and family are cooking and laughing and slouching across easy chairs and couches, the most casual remark falls into the vanishing point of Gaza. Gaza. Gaza. Being forced to wait to get into the hell that their once and former home has become in Gaza. The endless checkpoints manned by teenaged Israeli soldiers who make them wait for ten hours without explanations (what is there to say to these uncitizens who only appear human, the dogs and cats of Tel Aviv are treated with more tenderness) so that she can go visit her father who is dying of cancer. What is so important here are not the pictures, which might have been taken by anyone, hastily composed, as if there was a time clock on the camera, casual in the way that so much video shooting is in this timeless time, off the cuff, ill considered, and accompanied in non-synchronous moments by ghastly piano noodlings ripped from Beethoven’s Moonlight Sonata that turns each montage into kitsch. But in the face of these sub-optimal creations, a suite of subjectivites arrive from the other side of the world, the voice of a sister, a friend, sounds out, complicating any simple notion of “Palestine,” as if it was a single undying edifice, or even “Palestinian,” because for each of these flesh and bloodied members, it has its own turns and inflections. The endless repression of the Israelis have produced these stateless exiles, maestros of just complaint, divided from their families, prisoners of a life they no longer have. Commissioned by the World Health Organization.