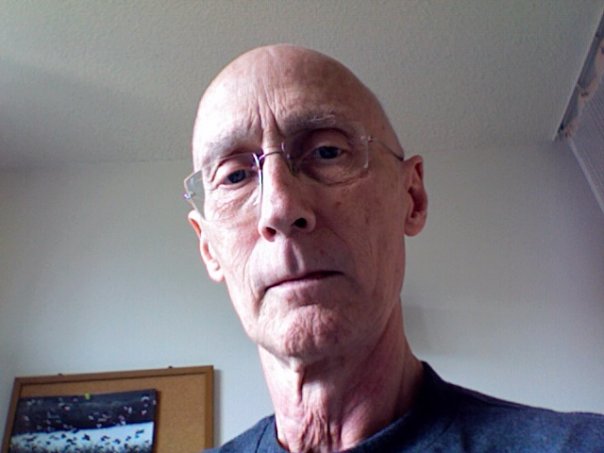 This sort of stylish mystery, a journey through the impossible with raindrops alone betraying the man’s silhouette and turning him into a ghost in the colours of a prism, or a phantom trapped by a rainbow. The mist continues to circle around his contours and the snow inexplicably bears the trace of his footsteps… until the policeman fires at his heart, until the invisible man becomes splendidly visible again in order to die. Paul Gibson

It might have started after he’d watched over his father’s illness and death. I’d like to recall the words he used exactly because he liked to wait and I liked to wait with him until the exact and necessary word could be summoned.

I buried myself with him.

Not long after, he was seeing doctors on his own count, the cancer already there. Andrew filled me in one night as I ate a cookie larger than my head wondering why I hadn’t seen him around. Sontag called it another country, “Everyone who is born holds dual citizenship, in the kingdom of the well and in the kingdom of the sick. Although we all prefer to use only the good passport, sooner or later each of us is obliged, at least for a spell, to identify ourselves as citizens of that other place.”

He was such a tall man, so eloquent and informed. Always making himself smaller. How small can I get? What a master of disappearance he had become. Oh no, please, after you. The mannerly charm and graciousness, the keen and too often overwhelmed attention he lent to his visitors. Everyone around him funnier, wittier, more perfect. Gods. His talk was so carefully put, as if he was negotiating a particularly delicate terrain, careful to lay each word down so that it could sing across the entire line of his sentence and mean at least two or three things at the same time. He had a quiet intelligence, this poet who told stories. The grammar all came from his eyebrows which would rise and fall and rise again, offering a second commentary as he spoke with its own pauses, inflections, line breaks, and finally surprise. Those luxurious brows would arch up as his eyes widened in surprise, once again a child, over and over. I felt him returning to this moment whenever some small corner of the world revealed itself to him. Oh, you’re here!

Ed was always more generous with his company than himself. A bottom’s bottom. The pain never far from that kindly smile. I talked about him with all those young shining faces in Milwaukee, Chicago and Prague – the students, the future, the ones who read about death in books. There is a picture we grew up with, perhaps we learned it in spelling class, while learning how to read, that each year we will know a little more, that words will become sentences, then picture books and finally novels. A picture of education and (why not?) post-classroom momentum, which will inevitably grow fuller, wiser, filled with greater understanding. Every day another step, better and better. So why do I have to go to see Ed in a shared room, his world shrunk to the size of his bed? Surrounded by hardly-there strangers, all waiting for the end.

We went for a walk so he could have a smoke and he fell, lightly – his talking, his arm as I took it on the way back, even his fall was light – and we were scrummed by university students who asked us inside. But we wanted to sit on the corner instead, and smoke, and watch the beautiful light that rang down on each driver as they made their way to the intersection. He had plans then. Prospects. For instance, he was going to send me his poetry which arrived two or three shattering days later. And read Lynn Crosbie’s Queen Rat which I’d just brought by. There was a future then. Two weeks ago, maybe a little more.

We weren’t the closest of them all, but becoming friends. Our friendship was part of that necessary promise, the hope of what was waiting for him outside the hospice. There were paintings to be done. Conversations. Words which would become poems.

How busy he was with his disappearance. I’m fine. I think those were his last words to me. And then the lift of those brows, cropped by chemo but still alive, a shadow of his former shadow. I’m fine, and then the look of surprise. Or was it a question? A shared wondering. I’m? Fine?