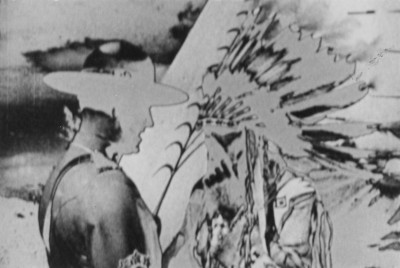 The cross-country travelogue which is the basis of this film was made in the fourties. Sponsored by the Canadian government, it is pitched towards an American understanding, unfolding the blank geography of its northern neighbour as a playground for the leisure class, its untamed wilds held in check by the relentless survey of the Mounties. Rocky Mountain ski runs, Niagara Falls, rivers teeming with gold dust and plains of buffalo reassure an American audience that geography is destiny.

“Having stumbled upon a hair-raisingly patronizing travel documentary promoting Canada (“the land of escape!”) as a vast playground for tourists, Hoolboom re-processes it in its negative image. Which may be the only way a Canadian can position himself within such an alien projection of nation: from behind the screen that hides the truth of colonized national experience.” Geoff Pevere, Take One