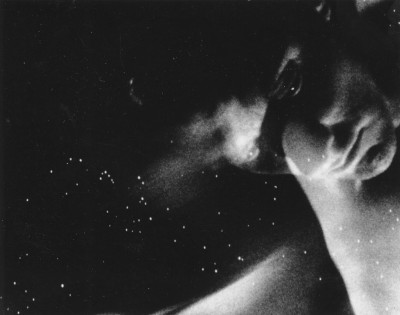 The indusium is the innermost membrane of the fetus, here conjoined with a radical (to the roots) marriage of church and industry, both conjuring worlds from architectures of light”seen here “in passing,” in a wake of meat and fire.

“Indusium is a membraneous sprout covering groups of sporangia of certain ferns. And the innermost cover of the fetus, the veil of the sign of inception. The short picture leads us to three places: to a fireworks performance in Vancouver, a steelmaking plant in Regina, and a church in New York. If the church (religious faith) and the plant (technology of social ideas) lie in their tidings deep in the past, then the simple patches of fire light offer a different hope.” (Petr Kubica, Jihlava Festival Catalogue) Indusium joins three locales: a fireworks demonstration in Vancouver, a steel factory in Regina and a church in New York City. These are married across the surface of the filmâ€”which opens the montage in a hugely magnified film grain, photographed in negative and slowed via step printing. Its slow swarm of dark holes conjuring an infernal pre-history, beginnings.

Church architecture aims for a demonstration of the eternal and unchanging, its embracing cosmology rhymed in a camera gesture that turns in circles around its stone arches, panning over and over its patron saints who wait in the hollows of its entranceway. Their blind faces overlook the approach of the faithful, and as the circles widen, shadow the passing traffic whose horizontal imperatives bear a flush of citizens far from the remains of this lost empire. The steel factory shows a microverse of machines bent to the rule of a grand design, another kind of cosmology. Here is the rule of an infinite visibility, the universe laid bare beneath the scrutiny of the foreman, witness to the manufacture of new goods, and a new kind of human being. The miracle of creation delivered to flesh.

The factory is photographed as an infernal flame, orange cauldrons spitting smoke are cast against the stark blue gaze of lifting cranes, a parody of ascension. There are no people glimpsed in this triumph of machines, swallowed in a billowing sheet of fire. Because these pictures are drawn against the church’s stone deities, there is a biblical cast to these proceedings, as if the factory were built in the image of the church, one succeeding the next, each championing its own privileged converse with the divine.

The fireworks lend fuel to the factory’s fire, even as the circling grain provides the ground from which these gestures of aspiration might derive. As the montage circles to its close a last figure is introduced, a shaking nude, wrapped in a warm light and photographed a frame at a time to reveal its stress points, the body made to bear the final impress of this new compact with creation.