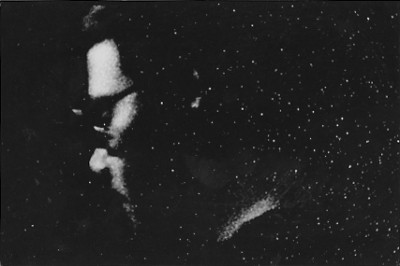 Song for Mixed Choir 8 minutes, 16mm, 1980
Song is laid over two picture rolls, printed together. The first magnifies the grain of the film, filling the screen with the circling constituents of its material base. The second roll draws a succession of figures from a dimly lit night life. There is a dance, a house party and a subway turnstile moving toward the most domestic kind of horror, a horror found in the commonplace and mundane.

“This early movie surrenders to the magic of light and shapes, it’s a flight through a net of nerve fibers that create brain’s visual sensitivity. Fast changing shapes, spirals of patterns that look exactly like the ones we can see when we close our eyes because of bright light. For most of us, they represent an unimportant part of our vision but for a debutante avant-garde filmmaker, they are the source of what Brakhage calls “closed-eye vision.” For a filmmaker, a song is a testimony to his own prehistory, to the very beginning when he rejected words because he wanted to show the picture, get to its essence and discover its real roots.” (Jihlava Festival Catalogue)

“Hoolboom’s Song for Mixed Choir delves even deeper into the patterns of light and dark produced by the vast network of nerves that make up the brain’s visual system: the rapidly mutating shapes, the grainy light and swirling patterns that nearly everyone sees with their eyes closed and that perceptual psychologists are likely to dismiss as ‘visual noise,’ but avant-garde filmmakers recognize as sources for what Brakhage has called ‘closed eye vision’… From ‘closed eye vision’ to open-eyed explorations of the lights, colours, textures, shapes and movements that constitute the perceptual foundations of our visual world, the sources of seeing tapped by avant-garde filmmakers are inexhaustible. However, they are not readily accommodated by a cinematic technology designed to represent only the focused, stable, clearly recognizable objects and events at the centre of our visual world, let alone recreate all that can be seen with the eyes closed. Hence the avant-garde’s subversion of conventional film practices and its concerted efforts to re-orient the cinematic apparatus—away from the realistic representation and the reassuring redundancies of narrative forms, and towards images and formal structures that can do justice to the richest and most comprehensive experiences of visual perception.” (William Wees, “The Camera, The Eye and the Visual Aspect of Canadian Avant-Garde Film” in “The Visual Aspect: Recent Canadian Experimental Films” Catalogue)

“For with the films of Mike Hoolboom we are confronted with cinematographic propositions which are neither make-believe nor dramaturgy. They are characterized by a display of cinematurgy where the film there before me presents itself to be seen, to be experienced as a cinematographic performance—not as the representation of a human drama in relation to which the ultimate meaning of a fiction film should be comprehended, but as filmic instrumentation, an opsis world.” (Alain-Alcide Sudre, “In Favour of An Exploratory Practice” in “The Visual Aspect: Recent Canadian Experimental Films” Catalogue) This was the beginning. My first film. I wanted to make an opening, or find one, inch my way along cinema’s infinite rectangle until I could eye a crease big enough to step into and stare back from a world of replicants, doubles, squeeze zooms and instant replays. You remember that line from Coming Through Slaughter? “He came here and placed my past and future on this table like a road”. That’s how it felt at the time. That I was heading into a medium of time machines. Headed towards the future.

I set out looking for a scratch to start from, armed with my father’s super-8 and a twelve pack of Labatt’s Dry. Driving to a friend’s flat on New Year’s Eve where I shoot a frame at a time all night long. The light so low I had to push process three stops. And when I get it back: the party was nowhere to be seen. All that was left was grain—great white hunks of emulsion turning over some absent centre. An atomic universe that formed an uncanny mirror of the night sky, with the same orbiting celestials running patterns in the small hours of morning. I blew it up to 16mm and watched as the movements of the everyday dissolved into a medium that was less an image of the world than another way to live. The radio brought a choir score by Heinz Holliger named Song for Mixed Choir which became the title for the film. It was filled with a prehistoric grunting, whistling and moaning—a tribeful of pre-linguistic utterances which made the pictures seem primeval—as if the image world arose from an originary broth, a genetic soup, and this was a snapshot of that time. A time before time.

Conceding that my granular New Year’s festivities might not be ‘enough’ I banished it to A roll status—making it a kind of ground or bass line which the second image roll would be printed through. Like a screen. I didn’t want to build concerted movements, but to allow moments, impressions, to shake themselves from this prehistoric ground, to materialize and dissolve again, taking shape, transforming, falling back again. I began with images of travel: subways, a face in a window, a shadow walking up stairs, a hallway trek. I gave my camera to a friend who plots a show stopping Halloween bash, then spends the rest of the evening locked away with his fiancée and an armful of snow. They emerge in brief horrific dashes, Duncan waving the camera threateningly over the crowd, occasionally remembering to squeeze the trigger. For Song ‘s final sequence I head home, filming in the half light of the basement I grew old in, looking on as my brother and father ponder an electronic repair. I shoot them up close, waiting for them to fall in and out of frame, watching them pore over an unnamed and unglimpsed mystery on the table between them. The final shot of the film returns to a hallway—the camera moving towards a brightly lit kitchen—the light of the present and everyday—the light which I imagined would shape the rest of my work.

Song is an image of cinema’s prehistory—before ‘in the beginning was the word’ but also: before the domain of picture took shape in our imagination. I wanted to show an image showing itself, to undrape its material support, to find the body of picture. If I cut into an image this is what I imagined would issue from the wound: silvery secretions of grain mass bearing the secrets of an atomic universe.