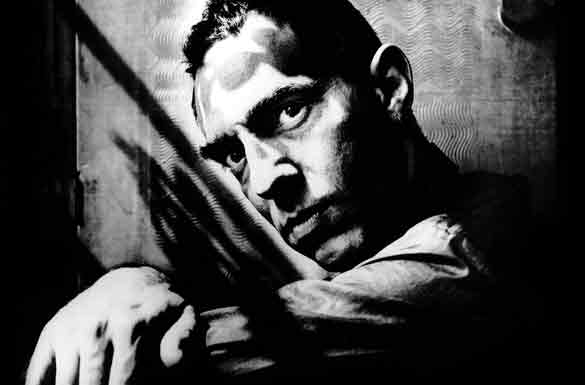 I’ll start with Derek’s words, from his book Chroma, his joyful, incantory, pagan ode to the mysteries of colour, published the year before he died, written after he already given us his cinematic Blue.

“And we end in deathly grey. The elephant is too large to hide itself, and the rhino too angry. The old grey goose will not become the silver foxes dinner. Grey is the sad world, into which the colours fall, like inspiration, sparkle and are overwhelmed — grey is the tomb, a fortress, from which none return.”

In this film, three artists fall, like inspiration, to sparkle together and refuse to be overwhelmed. Three sly camp saints, three colours. There’s Saint Tilda of the Crimson Lips, the muse that gave such majesty to Derek’s films, iconic and passionate, so classical, so modern, now lending her sparkling words in tribute to her great friend and mentor. There’s Saint Isaac of the Ebony Dandies, ever regal and revelatory, justly celebrated for his lustrous meditations on our bodies, our races, our fluttering passions, now lending his deft brushstrokes to this heartfelt portrait of his comrade and fellow traveller in all things queer, cinematic and activist. And of course, most of all, there’s Saint Derek himself, posthumous Derek of the Divine Delphiniums, Saint Jarman of the glorious gutters and profane sunsets, of the petrol in the puddles, the death-defying floral-torch bearer of a persistent artistic flame, one that weds the avant-garde to the leotard, one that digs out both the punk and the punctum of camp excess and affect, one that crucially accomplishes a baton-passing generation-bridging between the queer pioneers of the mid-20th century — Genet, Anger, Smith, Cocteau, Pasolini, Visconti — and a new generation that is equally global and grateful for the gifts and debts we owe St. Derek.

Tilda, Isaac, Derek: three artists, three colours, who in making this film manage to overwhelm for a time the greyness of our fortress, our world, achieving a shimmering rainbow iridescence. Again from Chroma: “Oh rainbow colour, please wash away, the grey in my life, the grey of the day. Squall heard this wish, and there and then, blew him away, to the rainbows end, where on the ground, lay a lustrous shell, rainbow bright mother of pearl. Opaline pearl, moonstone bright, petrol on puddles, and shimmering bubbles, Mother of Pearl is my delight.”

(Originally presented at the Reel Artists Film Festival, Toronto, Feb. 27, 2009 before a screening of Derek by Isaac Julien (2008) at the Al Green Theatre.)