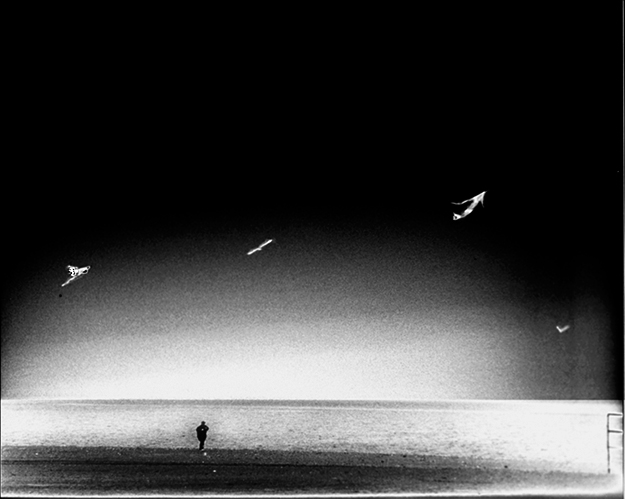 To the ones who can say yes or no,

Could her name really be Black? The signature behind all those dark pictures, the ones which refuse at least as much as they are willing to show, is a darkness jingled across the country time and again in hopes that the family might restage itself as national smile. Never mind the words which should never be spoken, the priests busy beating their prairie daughters, the fathers offering their children an inheritance of porn stashes to ensure that the intimacy of their bodies will always arrive as a picture first. Blacks is photography. There are few sunny smiles in Marina’s colourless pictures, instead great swaths of darkness cut into the light, holding their secrets, curling up into their own unspoken interiors. Her photographs offer us this darkness, insisting that the silvery apparitions which rise up out of it are temporary and contingent. The orthodox face, the ribboned bugle blower, the Bosnian caught in a frieze in her own hallway: these are only the apparent subjects of her pictures. The root of this looking, the swarming gravity that each halide moment longs to return to, is in the pools of darkness that sometimes surround or enframe, and sometimes more boldly occupy the centre of the picture enterprise.

Her camera is drawn to the people around her, and even when they are photographed in their own home, they seem like they have been drawn up in a moment of passing. What is it exactly I am feeling in those eyeless eyes, the hands folded away out of frame? I will never wear this face again, I will never return to this place. Some photographers offer us monuments and icons. It must be this way forever, their silver is a headline, a feature of the natural landscape. But Marina operates in a different neighborhood. Her pictures plumb a moment and exhaust it, each picture touches the roots of its subject, or the place between her and her subject, and when it comes up out of the underground the picture appears as an offering and a death mask. Everything is ending and transforming, and driving toward death. Here, take a look at my face. Can’t you tell? Not forever and ever, but just this once. Like this. Contingent and small. And for each look-at-me moment, there are a hundred don’t-look-at-me’s. Marina’s darkness (her black) preserves something of the mystery of her subjects, they are not opened to us the way a surgeon would view the body, but instead offer an invitation (and challenge) to the viewer to embrace what cannot be shown. Two children sit together, posed for reproduction, the older one, stage manager and big brother, looks cannily into the future, while the younger one ventures a distracted glance past any act of seeing at all. His time will also come, but it is not here, not in this room, not now. He is not ready to show himself, the picture offers only his blank surface of refusal. Doubling the stakes, Marina photographs this photograph, making it appear as part of a personal archive. This lost time gathers itself in the distracted gaze (which is visible), and the darkness which surrounds the two boys, and which, in turn, surrounds the photograph itself. It is a ripple of blacks, cascading in layers from the very heart of the picture, to beyond its frame, and then beyond the frame of its frame. Until death do us part.

Still another picture offers the front of a white house with a stamped shape cut out of it, underlining or drawing attention to, the front door. The stamp is in the shape of a keyhole, or a question mark, but inside this aperture, cut roughly from the original picture, one can see only further details of surface, and at the heart of that surface lies again a dark rectangle. To point at the place of the secrets, to show a face that has lived past its expiry date, what intimacy and beauty (is that a word we can still use? One which evokes the real terror of looking at beautiful places and people.) there is in abundance here. The picture offers an approach, not an arrival. The mystery lies just beyond this door. I will show you the way, but you have to get there, you have to cross over, by yourself.

Her new project, which proposes a ghost return to her homeland in order to follow the unmapped nomadologies of her once familiar life, seems ready made for her black pictures. How else to look with a double vision, through eyes that once lived there, and the new eyes that belong to neither here nor there? This is a rich, complicated, troubled, place of blackness, from which Marina will be able to draw still more dark beauty in the faraway so close place of home.