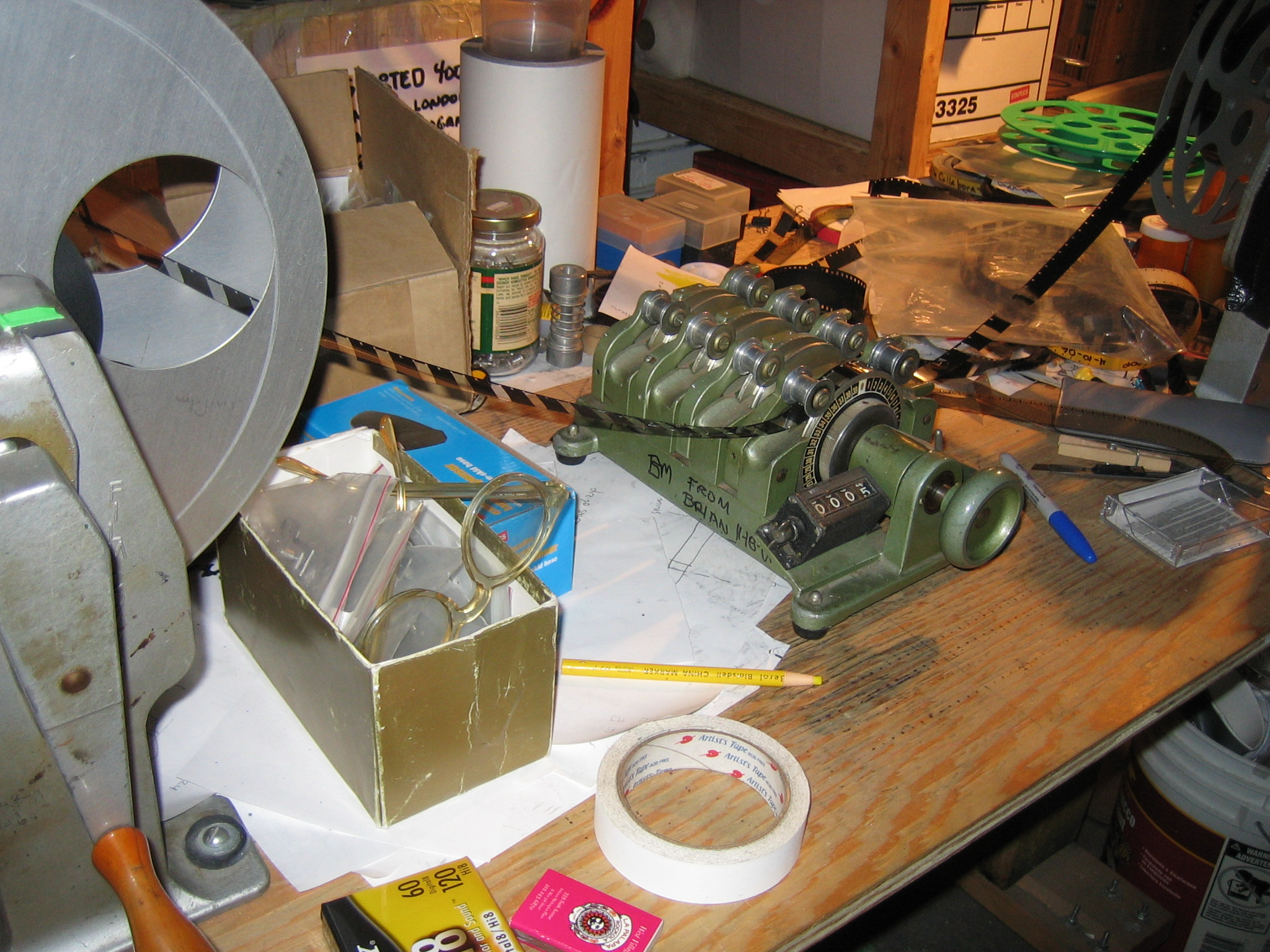 Light Waves and Their Uses by David Dinnell

Long filmstrips of ink-speckled acetate hang from racks in a corner of artist Bruce McClure’s Brooklyn loft. Shelves are packed with film reels and cans. McClure, sitting behind a table in the back of the room, prepares to fire up one of four film projectors for a piece entitled Christmas Tree Stand (parts 1-3). It’s one of several dozen multiple projector performance pieces he has created in the last decade.

A practicing architect, McClure has been based in New York since 1985. Long preoccupied with visual perception and the illusion of motion intrinsic to cinema, in 1994 he began constructing phenakistiscopes—pre-cinematic devices that create the illusion of animated motion. These experiments led him to the work of stroboscopic flash photographer Harold Edgerton, who had created nearly identical devices in the 1930s. Continuing his investigation of the moving image, McClure soon started working with film loops and their simultaneous projection.

McClure plays his projectors as if they’re instruments of light and sound. Working from a “score” of alternating flicker films or, according to him, “ink sneezes,” he projects his filmstrips simultaneously to create an illusory sense of movement and a density of abstract textures. Each performance is unique, neither improvised nor fixed. He works intuitively within certain parameters determined by each piece’s structure.

For Christmas Tree Stand, McClure begins with a stark white circle that flickers and pulsates on a handmade flat-black screen. A second projection, more diffuse, soon joins in and provides a kind of halo that transforms the circle into a sphere. These unified images simultaneously expand and contract as McClure adjusts the brightness of each projection through a rheostat. The black-and-white flicker produces a perceptual phenomenon of riotous chromatic color.

As the mind flails to make concrete sense of the image, dread gives way to the joy of engaging with pure form. The insistent metronomic rhythm of the syncopated projectors becomes metallic and stretched; menacing harmonic overtones peal like the bells of a mechanized carillon. The piece continues with the addition of two more projectors with modified gates, producing a grid pattern that seems to rotate as McClure adjusts each projector’s light. The introduction of color through gels placed in front of the lens brings forth rich, shifting color fields.

Forty minutes into Christmas Tree Stand, after the last projector dims and the room goes black, bizarre bluish-purple tendrils can be seen for several minutes. These after-images left on the retina are like the final movement of McClure’s performance.

Inspired by the paintings of Robert Moskowitz, which are at once abstract and representational, McClure says “there’s always a narrative content to my works, but I find myself thinking: If they are narrative, then what do they represent?” McClure describes what he means by explaining the four looping projections in Quarterdraw, a work exhibited at the 2004 Whitney Biennial. “They created a wave form, like the sound of waves crashing on the beach. Combine the four of them and you have little waves, big waves. While I was projecting that, you could almost feel the breeze coming out of the screen. There was a sense of re-creating some kind of environment. Maybe it’s natural, maybe it’s not.”

In his 1903 book Light Waves and Their Uses, Albert Michelson expresses a desire for the near future to bring “a color art analogous to the art of sound—‘a color music’—in which the performer seated before a literally chromatic scale, can play the colors of the spectrum in any succession or combination, flashing on a screen all possible gradations of color, simultaneously or in any desired succession, producing at will the most delicate and subtle modulations of light and color, or the most gorgeous and startling contrast and color chords!”

This uncannily accurate description of some of McClure’s pieces predates it by more than a century, and it attests to the ongoing desire in our culture for a direct art affecting our sense and experiences. As McClure disassembles the mechanical apparatus of cinema to its most elemental forms and then reconstructs them in unexpected ways, viewers of his work are left with an increased awareness of their own existence as sensate beings. The best of his performances cleave any larger societal or cultural concerns and get at the heart of creating a truly visceral experience.

Originally published in the Metro Times prior to Bruce McClure’s performance at the Detroit Film Center, September 2005