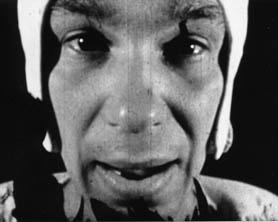 Notes on Programming the Images Festival (2000)
When I started watching movies/vids in Toronto a couple of decades back there was a place for every kind of making. A series of increasingly small holes, and in the smallest of those small holes was experimental film, though the truly discerning could make out even here, in the land of microscopia, a series of border guards and divisions, micro-empires with self appointed rulers. After years things changed because they had to. Some venues died, many makers quit, got real jobs, moved on. But all the while this incredible appetite for motion pictures endured, of all sorts, and if it’s true what Godard says, that every fiction with heart begins in documentary, and that all documentary is necessarily drama, what better place to anoint this hybridization than in the many image kingdoms that have sprouted out of the concrete here. As a fringe maker I routinely watched the exotic delicacies brought in from abroad, but also feature films, docs, animations. Though these were usually staged with a zookeeper’s mentality. We’ll put all the ones that fly over here, the crawlers over there, and beasts of prey out front.

Too often it seems the role of curator is taken on with convictions that mirror those present in the last judgment—you know, that final day when we’re all brought before the tribunal, and the good ones go to heaven while the rest of us are sent down to the other place. Most curators, in most short film/vid fests round the globe, feel their task is to decide who will live and who will die. What is worthy of visibility, what isn’t. What seems less considered is the order of heaven, the way one work renders the next visible, or invisible. It’s true, you can take six great movies, and put them together in a program that sucks. Though you can’t take six bad movies and make them good no matter how much you shuffle. But let’s take an example: I wanted to close out Friday night’s Shouting From The Hips program with Ian Jarvis/David Collins’ You Say Maria! I Say Mariah! It’s a four minute queer porn romp with soaring diva vocals. In some contexts, a light touch, a kitschy camp frolic filled with buff boys and Disneyland. But the work is about more than this, lurking behind the cum shots is a lament for a pre-AIDS, post-Stonewall queer nation where fuck freedom and identity seemed forever tied. While Carey croons “I can’t live without you” a buff bevy boffs—and we are made to wonder how many are still alive. To stack the odds a little, to insist that this frolic is a tragedy, I put Khmasea Hoa Bristol’s work just ahead of it. Entitled Industrial Bodies, it begins as serial abstraction, photographed inside the body, then opens up in its second half to show the maker’s grandfather, dying in Vietnam. As the film closes, and the heavy synth sits us deeper into this tragedy, we have been taken to a place of mourning, and that’s where Ian and Doug kick in. Because we’ve run from the inside of the body to the outside, and now we’re asked to imagine the inside again. Both these pieces still carry the echo of the first film in the program, Blight by John Smith, which shows the ripping apart of a housing project in order to make way for highways, with a fragmented, documentary-as music voice over, carried along on old voices who are no longer necessary, perhaps no longer alive. They have become, in this program, an old man in Vietnam, and then re-morphed into anonymous twenty year olds jacking off onto each other’s faces, their bodies drenched in fluids so like the houses we watched earlier being torn up. The film that haunted me during the fest was Owen Land’s Wide Angle Saxon, which follows a man to a screening at the Walker Arts Center. There, he watches a Hollis Frampton parody, Remedial Redding Condescension, grows bored and falls asleep, until suddenly woken by the audience’s polite clapping. Caught off guard while waking, he undergoes a religious conversion experience. These moments of conversion stalk all of Land’s work, and here he uses it to suggest that a film’s failure might be more important than its success, that influence is finally impossible to measure. What do we remember and why? How do pictures work? So here’s my confession: the film that rang clearest for me during the Images Fest was an abysmal failure, Chris Chong’s Music Might Have Deceived Us. It was printed so dark that few of its images were legible; so it passed, flickering, scratching and inscrutable, mostly marking out the place the film would have been, if we were watching one. Last minute problem with the lab, it happens. Of course, when question time came no one had a word to say. What do you say? For me, this film was a revelation. Chris had photographed a very abstract kind of love story through a series of mattes, holes he’d placed before the lens. He rewound the camera after each pass and shoot again through another hole. It struck me that these apertures of light are our personality. They are the sum of our hopes and dreams, the way we talk and dress, and we are holding onto our little peephole with everything we’ve got. When we push light through our hole we produce cinema, so for a few flickering moments we’re able to share our view with others. Most of the time, it’s true, what people have to share is not very interesting. It’s too thin, too long, lacks time or balance or unity. Most movies, regardless of genre, are banal and mediocre. But sometimes it’s different. When you sit down you’re looking out of your small hole, but sometimes this place moves, you catch a glimpse out of someone else’s light. That’s when art is possible. When invention is possible. That’s what Chris Chong’s film taught me and that, for me, is what programming is all about.

Originally published as: “The Images Festival or Ethics are the aesthetics of the future: Diary of a Fest Programmer”, LIFT Newsletter, vol. 20 No. 1 Jan/Feb 2000