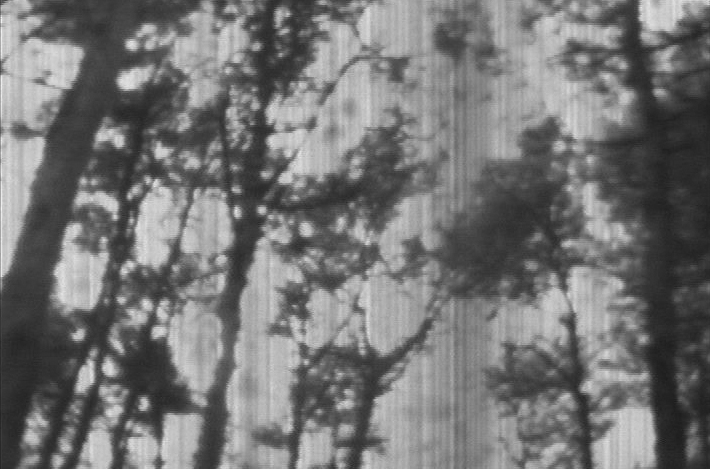 I have to look up the title in the dictionary which tells me Midden is a refuse heap, a garbage dump, but also: a mound that indicates the site of human settlement. How curious. I watched this movie first of all in a glorious three screen incarnation (before its current one screen distillation), with all three projectors perched on top of book piles and chairs and cast against my living room wall. It was the large and small all at once, fitting enough for what still feels like a home movie shot far from home. Driving north on a punishing highway with a trunkful of gear was the only way David figured he might share what he had been working on for so long already, and I couldn’t help note the disparity between the tangled hairnest of wires and machines and the distinctly lo-fi touch of the pictures, captured with some sub-optimal security camera, long out of date and distinctly malfunctioning. He found it, he told me later, in a story which might be apocryphal, in a junk store for a few dollars. The camera and all its touches belongs to the midden, the forgotten and thrown away. The invisible world.

We had already found our common ground in a particular brand of minimal laptop electronics, personified by dronesters like Phil Niblock and Jonathan Coleclough, or looping deliriums like William Basinski, or the dry electronic epics of Eliane Radique. David had a near encyclopedic command of this microverse, and had the uncanny ability to name a cd just by flipping it over and eyeing the track lengths. He was happiest listening to what might sound, to someone just dropping by, to the very same note, for a very very long time, and catch all the ways that note was gathering colour. Those fine ears, sensitive to every whisper. He was honing his attention one drone at a time, but somehow the cinema, his first and greatest hope, could come alive only when he was far from Detroit, which is where he was laying his pillow down in those days. So it was off to Japan and the Bullet Train which deposited him at the foot of Mount Tsukuba in rural Ibaraki prefecture, where he took up residence with his thrift store camera. He walked the forest twice weekly for a year which is what he required to create an approach, the necessary time of steeping and waiting and allowance, before he began to record pictures. It is not something he does lightly, the way others knock out a sketch, or raise a camera to fix their child’s attempt to walk upright. It is a look that is a long time coming, that comes from far away, and when it arrives it is attuned, like the minimal music he so adores, to every twitch and change in the picture plane. The way a pixel grazes from light to dark, the fall of a leaf, all this feels momentous, dramatic, superlative.

What did he commit to tape there?

Mostly it is the forest we are privy to. There are long shots of trees, all shimmering in a digital grain and black and white. I used to watch a lot of these kind of movies. Slow things filled with leaves and rocks and water, quietly making its way, but it rarely raised my pulse rate, even then it looked a whole lot more fun to make than it was to watch. But somehow David’s pictures are different. (Or are they different? Or am I seeing them only through the scrim of friendship, the hustle of wires and elaborate set-ups he entertains just so these pictures might hit the screen, the living room wall, so that we can both see it at the same time. Am I looking at pictures of a forest, or pictures of my friend?)

The first picture arrives. Is it a tree or only a shadow of a tree? And the light in the sky, is that lightning, or just some video glitch, the system showing itself at work? These pale, hardly there remnants of forest are the opening salvo. What is being recorded here is less a statement of presence than an assertion of their disappearance.

And then in the hazy light of day a city is glimpsed from far away, as if we were the scape looking out, a thousand lines re-marking the dull sky. Pictures of a home far away from these other homes arrive, it is not one of the encroaching presences, the concrete dwellers, massed and bullying their way forward without being able to see the natural world which contains and surrounds them. For how much longer?

From a respectful distance we see a woman (is it?), her head wrapped in a kerchief, carrying a stick as she enters her house. It is the only shot of a person in the entire video. A person! Yes, this is a great event, four maybe five minutes into the video, the equivalent of a bomb going off in an action movie, she walks into her house. A suite of home interiors follow, the drapes lilting in the breeze, the white grey light causing some kind of vertical line video marking because of the camera’s inability to negotiate the light. It forms a curtain of looking, of waiting and arousal. My deformity, my inability, is my beauty. Through my flaws I make myself visible. I watch for the flaws in others, and learn to read them too. Low fidelity, long looks. An aesthetics of midden. Don’t throw me away yet, not yet.

And then we are off into the forest, at first on foot, and then with a secure three legged solidity. In the movie’s longest shot (3:22), watching over a cluster of trees (what else?) the picture tears and a black wound slowly asserts itself, a void that lies beneath definition, which the picture plane is busy staving off. Not that, please no. While everything else in the movie is grey-light or dark but relentlessly grey-the wound is jet black. Close-ups of the bamboo forest are waiting in their light and shadow, these delicate almost white trunks as if about to speak.

Then the screen darkens and we hear a man sing a mournful song. Sound but no picture. We have been watching a lost place, a site which can no longer be seen because the sensibility that created it is no longer around. The old man sings and we can hear the traffic occasionally zipping past. The city is coming and when it swallows this place there will be no one around to remember the midden, the refused, the already disappeared.