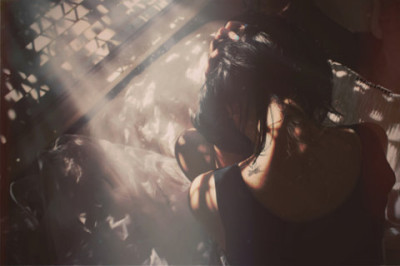 It was so terrible, the accident, the past, that you put your hands over your eyes to cover them, so for a few minutes you manage to see nothing. In this state you imagine your eyes as two vast saucers, blackened from age and abuse. If you could wipe these saucers clean, everything would appear as it really is, infinite. But when you take your hands away the darkness continues, as you look out into a night without stars to give it shape.

There was another who walked this way, not in search of a world without eyes, but a room without sound or speech, a place in music they call the rest. As a composer, this state of silence would obsess him until a letter from NASA carried an invitation to visit their headquarters in Houston. In 1965 John Cage traveled south to enter an anechoic chamber, a small room scientists assured him was absolutely without sound. While NASA officials closed the door behind him, Cage patiently waited for nothing to happen. But after a time he could make out the low, unmistakable sound of a running stream, or water running through the plumbing, accompanied by the regular beat of a drum. Startled, he realized that with no outside sound to distract him, he was listening for the first time to his own heartbeat, and the rush of water was his own blood, circulating the oldest of memories, the impossibility of silence.

Outside it is still dark, and you can’t help feeling you’ve come this way before, and then you remember where it was, in the dark soup of your beginnings, the womb of your mother. You lived there nearly a year before opening your eyes for the first time, and what you saw was so terrible, so horrifying, you’ve pushed it from memory forever. Lying crouched inside the dark of your mother, listening to the throb of her speech, most of your family agrees, it was probably the last time the two of you really got along. Was it because of that first painful lesson, that in order to create, something had to be cut out? Or was it some feeling of hopelessness at never being able to return to the warmth of her darkness, that night of nine months?

Shit. It’s started raining. Not just raining, but really pouring. You take shelter thinking of Noah, tending the first zoo. Legend has it that everything there existed in pairs, except its keeper. You hear a voice from the stoop and follow it until you find yourself here, in the long dark night of the Canadian cinema, waiting for an image of home. Eighty years ago it didn’t look much different than this, and today we’re still waiting at the doors our theatres, waiting for the American film to finish. The American cinema began without sound, but the Canadian cinema began without images, searching in a dark others have learned to call home. How many times will we be made to relive the Vietnam war, or Watergate, or American comic book stars, or American gangsters or American love? And after all this time in the dark, when it finally appears, the Canadian cinema, will we recognize it as our own? Or will it seem like a child grown strange from neglect, an accident of birth? Having cut ourselves to fit an American mirror, when we turn to face our own, is there any way we could see ourselves except as monsters?