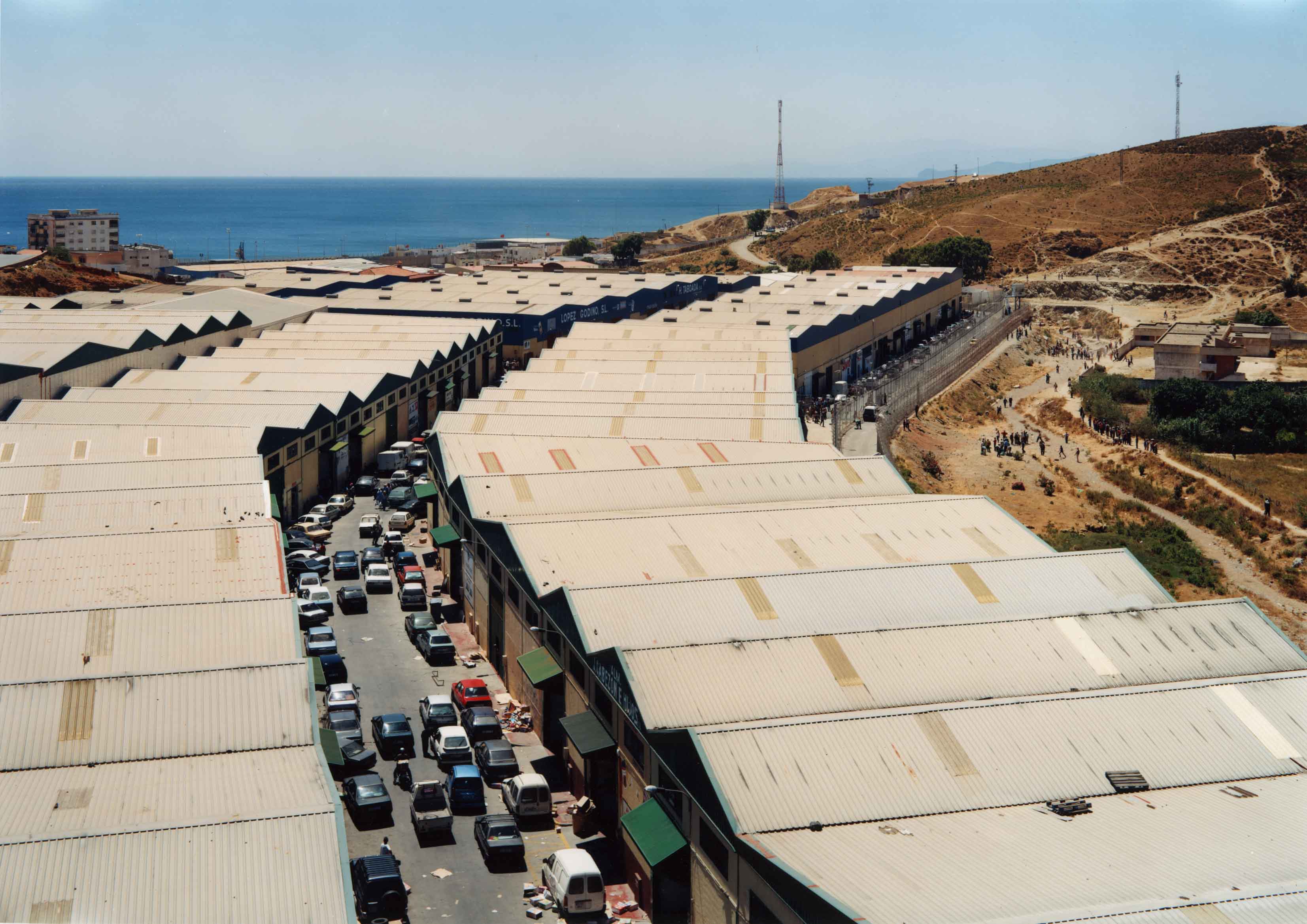 Taking to the Periphery by Andréa Picard

In 2005, Lonnie van Brummelen was awarded the prestigious Prix de Rome in her native Netherlands for Lefkosia, the third installment completing her 35mm “triptych,” Grossraum. The international jury comprised of artists and art world professionals dutifully commended van Brummelen for her treatment of the divided Cyprus capital, while reserving their fanfare for the work’s breathtaking images. They exclaimed in their jury statement that, “One is simply engulfed in its beauty,” and their enthusiasm nearly leapt from the page. There’s no question that van Brummelen’s recent filmic work is seeped in a formalist, almost classical beauty. “Painterly,” “photographic,” and “visually arresting” are adjectives that are naturally applied to Grossraum. In it, the documented images reveal a world of luscious flora and fascinating patterns of texture and colour, and internal rhythms created by the movement of those being observed, as well as by the meticulous and aesthetisizing ways in which the artist observes them and the attending geography. The more one learns about van Brummelen, however, the more one cannot deny the steadfast left-leaning critical engagement which underlines her current practice—one which questions the institutionalization (and militarization) of everyday life, as well as that of art itself. From this installation alone, it is clear that van Brummelen is mindful of a vital terrain that bridges the too often contradictory consideration of aesthetics and issues. The two have regrettably veered away from one another, both in the field of cinema, where the dominant documentary mode is increasingly one of low budget video images made for broadcast and not for projection (gone are the days of the gorgeous Johan van der Keuken longform travelogues), and in the visual arts, where the commodified art object is inherently at odds with political engagement. But when aesthetics, issues and political art-making are weighted equally, the results engender tremendous import, riddled as they are with paradoxical tensions suggesting a transformative experience beyond the normative boundaries of reception. In that, van Brummelen’s art-making recalls that of another Dutch artist, documentary master Joris Ivens, whose revolutionary formalism was matched by his edict to represent the invisible and the physical risk involved in that very task. Grossraum is a sequential, single-channel, 35mm film installation in three parts examining three sensitive border points along the ever-expanding Europe, which is paradoxically growing its territory while tightening its frontiers. Documented, in ravishing and precise compositions, are checkpoints at Hrebenne, nestled between Poland and Ukraine; Ceuta, a small Spanish enclave in mainland Morocco; and the capital city Lefkosia (a.k.a. Nicosia), divided between Greek South Cyprus and Turkish-occupied North Cyprus. Van Brummelen made the pilgrimage to these remote sites with lumbering camera equipment in tow to witness and capture daily life on film, as well as to visually record the landscapes along these heavily patrolled margins. Accompanying the floor-to-ceiling projection is The Formal Trajectory, a publication written and produced by the artist and her collaborator Siebren de Haan, which chronicles the real-life narrative behind the making of Grossraum. That account, or trajectory, is one of official letter-writing and clever permission-seeking, interspersed with diaristic accounts of their travels and in-depth researched histories for the three locations portrayed in the installation. In the opening letter, van Brummelen states her case plainly: “The European territory is expanding: internal borders are taken down, external borders are reinforced. For many Europeans, ‘Europe’ nevertheless remains an abstract entity. The impact of the recent developments of the EU seems difficult to grasp. With a 35mm landscape film of three crossings in the European outline, I would like to give an impression of the wide range of landscape and inhabitants Europe contains.”

Then she stresses, as she must, that the footage taken will be used strictly for artistic purposes. A goodwill promise of disarmament for art in the eye of the establishment is rather benign and lacking in might. Thus the question must be asked: Can a poetic evocation of Europe’s problematic borders effect positive change and bring about awareness of injustices to those who suffer within a system that benefits others? On their own, the three film fragments seem to wield little persuasive power as their quiet lyricism presides majestically over the work, no explicit discourse in sight. And yet a dialectical tension results from van Brummelen’s treatment of this unique landscape film, effectively drawing the viewer into a heightened realm of examination/contemplation.

In “Hrebenne,” for example, which became her subject in May of 2004 just as Poland was accessioned into the European Union, we see large trucks line the streets as their drivers await the necessary visas to cross the border, with wait times of up to three days. This newly-created European gateway, lacking in proper infrastructure, has caused a blockade where basic necessities like food and shelter are not readily available to those stuck in a Weekend quagmire. This scene of stasis is juxtaposed with a masterful long take revealing the sublime beauty in the immediate landscape: a white cotton-ball sky, a sfumato painted forest plucked from a Gerhard Richter canvas, a pristine and shimmering lake, molten earth, tall grasses sprinkled with wild flowers. From the artist’s bird’s eye view, the contradictions of what lay before her can be captured with her controlled ambulatory camera which yields monumental compositions in which the expressive force of disorder creates its own rapt rhythms. Despite the non-descript, modest and ramshackle buildings, beauty is everywhere to be noticed, and not just in nature. The matching patterns and colours dotting the roadways are rendered photogenic through the camera’s eye, informed by a set of artistic choices including focus play and associative editing. The viewer is seduced by beauty, then compelled to look much closer as our gaze is redirected toward these small-scale maneuvers. At Ceuta, van Brummelen’s camera describes the surrounding area of this Spanish-Moroccan city and its Mediterranean seawall, with a slow, steady pan along the 8.5 kilometre border, displaying an incredible Abbas Kiarostami-like landscape through which people climb toward the border peddling contrabando. The image is fraught with discordance; it is at once remarkably beautiful and alarming in its implication. Grossraum is comprised of such images, which seize both with their splendour as with their disquieting realities. The liminal space produced by this tension might not rally for resistance but for those of us who believe in the transformative power of art, its strength runs deeper. Van Brummelen with her poeticizing eye and sagacious mind sets out to undertake what Guy Debord, the controversial leader of the Situationists, called for in the quote above. But does a danger lie in aesthetisizing areas of conflict? The sword being double-edged, the artist takes a cue (consciously or not) from Godard who put forth that the meaning of an image comes from its caption. The caption in this case is provided by The Formal Trajectory, the companion piece which imparts the context and wrests some of the film’s destabilizing abstraction. In Lefkosia, the flag of the Turkish Republic of Northern Cyprus appears ubiquitously like an emboldened brand name, on signage and physically embedded in the landscape with a mosaic of pebbles fashioned in the inverse colours of the Turkish flag. This blanketed TRNC flag is shot from different points-of-view, displaying its dominance over the land as a potent nationalist symbol, a striking decorative relief, and assuredly a provocation for the Greeks. Rendered in crisp 35mm, the image is arguably more visually captivating than it is dialogical. Without the accompanying text, that is.

The title Grossraum, which is used in German to denote a greater area’s relation to the center (as in “the Grossraum of Munich,” for instance, similar to “Greater Toronto”), is also an obvious allusion to German political thinker Carl Schmitt’s theory of European integration that emerged out of fascist Germany in the late ’30s and was further developed in reaction to a growing American hegemony in post-WWI Europe. The cycle of history is not lost in these images. Used here by van Brummelen, the term “Grossraum” is subverted; direction is focused onto the peripheral cities of Hrebenne, Ceuta and Lefkosia, not to the almighty center. This antinomy of center and margin, of inside and out, of autonomy and entrapment, and of form and content largely informs the artist’s practice as she visually and intellectually explores the boundaries of public space and the implications engendered by obstructed movement from physical barriers or reconstructions. An earlier work from 2003 titled Obstructions documents in 16mm black and white the chaotic inner-city peregrinations of people going about their daily lives amid construction zones and renovated squares in Amsterdam and The Hague. Adopting a high-angle point-of-view, van Brummelen provides a panoramic vista of the obfuscating maze-like scenes with alternating close-ups that create a sort of entropic claustrophobia despite their nostalgic formalism. From Ivens to Rodchenko, Obstructions suggests its lineage—but the concerns are manifestly those of the artist, who takes it further by turning to the gallery space in order to sculpt an experiential contradiction between the silence of her images and the mechanized clamour of the projector—itself a symbol of artistic resistance amid an increasingly digital age.

Van Brummelen is a modern-day descendant of the Situationists, whose Dadaist ethos mobilized against a dangerous, intellectually stagnant and sterile milieu and sought to fuse art with everyday life in order to transform society. Her work, which includes interventions and performances, films and installations, photographs and artist publications, is surging with like-minded urgency; it’s conceptually rigorous, analytically rich and voluble and fervently engaged in a culture of resistance. The literal détournements of those she films echo those she must make as an artist whose work inevitably rests within an institution of production, consumption and reception. By challenging this doctrine through contradiction and knowledge, van Brummelen continues to ask: Can art survive in a capitalist world? The tensions awakened in her work reveal some of the struggle to make socially engaged works of art which retain their formal autonomy. Such is the case in Grossraum with its painterly compositions and clarion call captions.

This text was originally commissioned by Gallery TPW (Toronto Photographer’s Workshop) for the exhibition Grossraum, April 5 – May 7, 2007. About the Artist
Based in Amsterdam, van Brummelen was the recipient of the Prix de Rome in 2005. She has exhibited extensively in museums and film festivals throughout Europe, and was recently featured in the Gwangju Biennale in Korea.

About the Writer
Andréa Picard is a film programmer at Cinematheque Ontario and The Toronto International Film Festival. She contributes a regular Film/Art column to Cinema Scope magazine and has published for numerous other publications including Prefix Photo, Canadian Architect, Border Crossings and Flash Arts International.