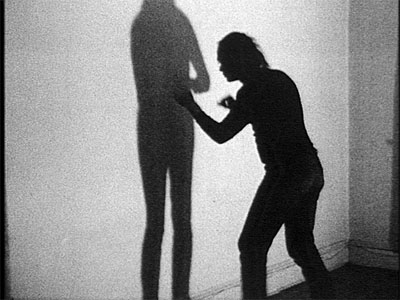 Vito Acconci notes from a lecture delivered at the University of Toronto on November 10, 2005

From this interest in movement across a page, I became interested in movement. How do I get off the page? And then: how do I move? My ground was a piece of paper. What happens without the paper? What happens when I’m not negotiating a piece of paper, what makes me move? How do I move? In October 1969 I did a performance called “Following Piece.” Each day I picked a person who was walking on the streets of New York and followed them, sometimes for a few minutes until they disappeared into a cab or their apartment, sometimes for several hours, through shops or cinemas. I am almost not an I anymore. I put myself in the service of this scheme.

Movement that covers space instead of uncovering meaning. So now I’m in real space, once the scheme is chosen I am tied into it, dragged along by another person. Then I began a shift from ground (medium) to instrument (myself). These new pieces were focused on making the self, this was the 1960s remember, and there was a lot of talk about the self. How do I prove I to others? How do I find my body, by finding myself? How do I find the space I’m in, how to occupy a self? How do I find every inch of my body? The body as space as instrument, how does my body survey space around it? There was a stress in this work on the body, how the body adapts, takes shape or resists or reacts according to these stresses. “Trademarks” was a performance in which I “found myself” I would bite each part of myself, apply printer’s ink and make prints of these marks.

Video offered simultaneous feedback, you can see what you’re doing while you’re doing it. Video as mirror, to see what you can’t see. Movies were landscape but video was close-up. When he was asked why he never used close-ups Charlie Chaplin answered that there was nothing funny about a face fifteen feet high. But TV delivered new faces, made looking at new faces possible. Jack Nicholson and Robert DeNiro wouldn’t have been possible without television. The monitor is the size of a person’s face, it offers a face to face encounter between artist and viewer. Then there’s this question: where am I in relation to the viewer? Am I below the viewer, beside them, opposite the viewer? I take a position vis a vis the viewer in each videotape. In front of the camera. These performances also featured self reliance, a self enclosed system. Now how do I bring viewers into it? What is the relation between you and me? “Claim” was made for a two level space, there was the street level gallery and a basement, connected via a monitor and cable which showed me in the basement, blindfolded and talking and wielding a crowbar. “I’ll stop anyone from coming down here.” If anyone tried to come down I would swing the crowbar. It was about art as an exchange system, the way artist meets viewer. I am a still point, viewers had to go down, to get through something, to get to me, but I was continuing to confirm an art world hierarchy. The problem was focus, I was the focal point, the target. What if I wasn’t a point, but part of the room, part of the architecture? In “Seedbed” I had the floor ramped, I entered the ramp and lived underneath it during gallery hours. It was important that I get under the ramp before anyone arrived and was there after everyone left. I became the floor. People would come in and I would talk to them, I would conjure sexual fantasies from their footsteps and constantly masturbate, it was about the inside coming outside. At first I thought of spitting constantly, or inserting a small video camera which would record my eating some kind of food which would grow a little tapeworm inside, but this was too baroque, too complicated. So I settled on masturbation. Scattering seed, that was also important. Whenever I got a gallery show I would think of what to do in that space, I would go and look around and try to think of how to proceed. I didn’t have something already done, I responded to what was there. Today this is called site specific, this was always important.

In the 1960s gallery space was undergoing changes, in the mid sixties the walls were typically pastel, it looked like a rich person’s apartment, and this was finally replaced by white walls, a neutral space to show art which reflected the dominant art world mode of minimalism. I thought, along with my friend Dennis Oppenheim and others making non-object art that we would bring down the whole system. We had nothing to sell, so we would finish this whole capitalistic system, but that’s not what happened of course. We became window dressing for these new Soho galleries, we would get bring some attention and then they would sell some Rauchenbergs in the backroom.

After “Seedbed” I asked: if I’m not seen, do I have to be there? I was having second thoughts about live experience which was related to a 60s discourse about finding myself. By 1972-73 the self didn’t seem quite so autonomous, maybe there was no self to find, maybe the self existed as a system of feelers, an intersection of social, political, moral imperatives.

Another question: Can art be used to gather community? I began to make installations to answer this question. I made a piece which had a long table with chairs at it, and the table stretched out the window hanging over the street. There was a speaker with a clock ticking and my voice says, “Now that we’re all here. Now that we’ve gone as far as we can go…” I wanted to treat the gallery as if it was a town square, but the gallery will only, ever, be a private space. If I wanted a public space I would need to move into architecture and product design. I wanted to redo architecture, connect the body to architecture (which contains the body). Could the body cause architecture? Could architecture last as long as the viewer was engaged, carried along and set up and disposed of? Temporary and nomadic, like clothing? Could architecture be a vehicle used by the viewer? I wasn’t interested in art anymore because the art viewer is separated from the world, they are only looking at art. I’m more interested in casual passersby. At the end of 1980s my way of working changed, I had to have architects around, and I thought of this slogan: “The person who lives by the sword, dies by the sword.” If something begins privately it ends privately. If you want to have something that ends up public, it was necessary to begin publically. One person is solo. Two people are a couple or a mirror. Three people is a public, the third person starts an argument. So the Acconci studio was formed, an ongoing thinking, discussing, arguing project.

Question: when you design a space are you also designing the activity possible within that space? Is architecture totalitarian? Or can our spaces liberate people?

Question: can we have a surface that is its own structure?

Music and architecture are the same, both make an ambience.

I’m interested in transparent, immersive, continuous spaces. Mobile spaces for a mobile body, offering freedom of movement (equals freedom of thought). If this space can be turned upside down then I can turn something else (a problem, my relationships, my ideas) upside down too.

The computer offers us an unprecedented freedom, and the conservative backlash is the result. The election of George Bush shouldn’t be possible in the time of computers but.

Vision is about control, and distance is necessary to exercise control and mastery. What upsets this view is proximity. The control of viewing is subverted at close range. Therefore close-up equals change. Change happens up close, in close-up, when the objectifying gaze is left behind.

The chair keeps its back up.

Once a room falls then people can rise.

Time is fast, space is slow.

A laugh is a second thought, a parenthesis. It means the beginning of thinking for yourself.