Kyoto
Dogen was a thirteenth century Zen monk in Japan. In 1240 he had just come back from China and returned to Kyoto, the city of his birth. What he found there dismayed him. There was too much power in the imperial government and the city had divided into factions. He was 40 years old and doing the best writing of his life. It’s rare, this writing. You don’t find many folks writing about practice, there’s a lot of poetry and calligraphy, but not many Zen teachers were writing about Zen. Wanting nothing to do with city life, Dogen started a monastery outside Kyoto. Expressions
The Mountains and Waters Sutra was inspired by a poet who wrote about mountains and waters as the broad tongue of the Buddha. All night long they speak in the voice of the Buddha. He ends his riff by asking, “In the morning how will I explain this to others?” In other words: how do I express it? Zen practice always believed not just in awakening, but expressing the awakening. Practice doesn’t stop at private personal awakening – it moves into aesthetics. The student/teacher dialogues around zen koans are another expression of this gesture.

Sun
Usually a sutra is a treatise on a subject, so naming this “The Mountains and Waters Sutra” would seem to indicate that the sutra is about mountains and waters. But Dogen turns this traditional reading on its head by insisting that mountains and rivers are the sutra. They are the teachers and the teaching. It’s like surya namaskara – the sun salutation. It’s sometimes described as a salutation to the sun, but it is actually a salutation of the sun. When you’re inhaling and releasing the soft palette the spreading fingers are the sun’s rays, the moon is at the base of your skull and the sun is in the pelvic floor. You become the sun. And you are also the nearest star to the sun, which is 10,000 light years away, so you have to really reach for it in the forward bend.

Dogen says that mountains are like masks for infinity. They represent timeless time.

How fine it is to be in meditation and not having to decide about things, about your finances, about your emotional finances, about the state of your relational bank account. For the first ten years of sitting practice you try to fix your emotions, but when we drop underneath that the experience is timeless. You can’t say how long you’ve been on the cushion until the bell rings.

When you get close to them or far away from them, mountains are not just solid things. They are actually walking. Everything you think is solid is moving. We all experience our life as structures embedded in time, but nothing’s really like that. If you look closely at your life, you’ll see that each solid structure is walking. This too shall pass. 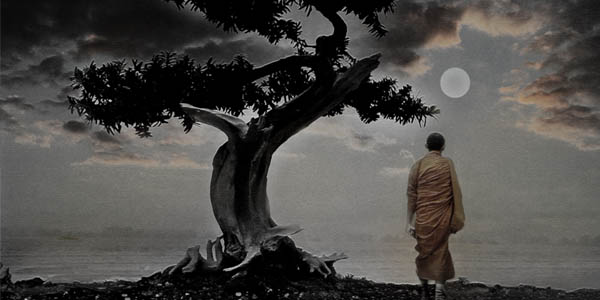 Fix
When you listen deeply to people speaking (in psychoanalysis) you can hear the parts of their story that have become rigid. They’ve decided on a role that someone has – the neglectful mother, the absent partner. They’ve turned parts of their experience into things. Mountains walking is what we’re doing in our psychological lives – letting the practice catch those places that we’ve been trying to make permanent. Every spiritual practice has techniques to re-present the fixed experience.

How can I open to pain enough so that it’s not forever and not static? How can I face the pain without moving away from it, or burying it? We are presented with the foreground of events, but the background is infinite. It can be hard to see these infinities because we’re so bent on keeping a story going. Does anyone here have an enemy? I’m just back from Edmonton where everyone had enemies. Perhaps we’re softer here. But enemies are people we’ve turned into a thing, we can’t see their redeeming qualities, you can’t give them their infinite background because your heart is closed.

Mugai
“Mugai Nyodai was a 13th-century Japanese Buddhist nun credited who became the first women whose enlightenment was officially signed and sealed. Speculation suggests that she was born into the Japanese warrior-class, and given the childhood name of Chiyono. As was customary for young women of her time period and class, she married and had a daughter at a young age.

She began to visit the monastery of the Chinese Rinzai Zen monk Wu-hsueh Tsu-yuan (known in Japan as Mugaku Sogen). Although laywomen were not commonly admitted to monasteries at the time, dharma custom assured that any woman who sought Buddhist teachings would receive them. Once Mugai’s husband died and her daughter was grown, she became determined to live out the rest of her life as a nun. She shaved her head, gave up all her belongings, and showed up at the doorstep of Wu-hsueh Tsu-yun’s monastery, taking the name Mugai Nyodai as part of her monastic vows.” (Lisa Erickson)

She was heartbroken over the loss of her husband. She went to the Zen master and asked him, “What is Zen?” Isn’t that a great question? He replied, “The heart of the one who is asking is Zen, it is not to be got by the words of another.” Are you looking outside of your own heart? Do you think that the Buddha is really in the altar over there? When we look at our mentors, have we learned from what they’ve said? No, it’s what they do that counts. Particularly when they make mistakes, that’s when you see their real character.

In the eighth lunar month of the following year she went to the well, and there the bottom of her bucket broke and all the water spilled back into the well, and at that moment she was free. She experienced enlightenment. Following the tradition, she expressed her enlightenment in a poem.

In this way and that I tried to save the old pail
Since the bamboo strip was weakening and about to break
Until at last the bottom fell out.
No more water in the pail!
No more moon in the water!

Break down
Can you let yourself fall apart? Donald Winnicott was an English child psychologist who made an important distinction for people doing deep inner work – between dis-integration and un-integration. When there’s a loving relation then you can fall apart and be held in that relation. Can you let the bottom fall out of your pail? Then mountains are walking. This is where resilience comes from.

One of the ways resilience is measured is whether something that is broken can be rebuilt. Computers are particularly bad at this. Forests are particularly good at this. I remember walking through a stretch of Algonquin Park that had been badly burned the summer before, but now in the midst of this fresh burn there were the most beautiful flowers blooming. This can only happen when you can let the bottom drop out of the bucket. Everything Walks
Dogen is saying that everything is walking all the time. Mountains walking are just like humans walking.

When Wu-hsueh Tsu-yun died, he named Mugai his successor, but this met with some resistance by the monks. Over time, she prevailed and founded the Keiaiji Convent, head temple complex of the Five Mountain Rinzai Zen Convent Association.