How one Toronto mom reclaimed her artistic life by using Facebook

Filmmaker Kelly O’Brien was desperate for a creative outlet Toronto filmmaker Kelly O’Brien is inspired by life’s ordinary moments, and she creates art using a tool most of use every day: Facebook. (Facebook/Kelly O’Brien)

Kelly O’Brien could have gone with Twitter or Instagram, or just blissfully ignored social media altogether. But it’s Facebook that the Toronto filmmaker signed up for in 2009, the world’s most ubiquitous tool for spamming friends with photos, inspirational quotes and baby pictures.

O’Brien does all that stuff too, but she also uses Facebook to make art. 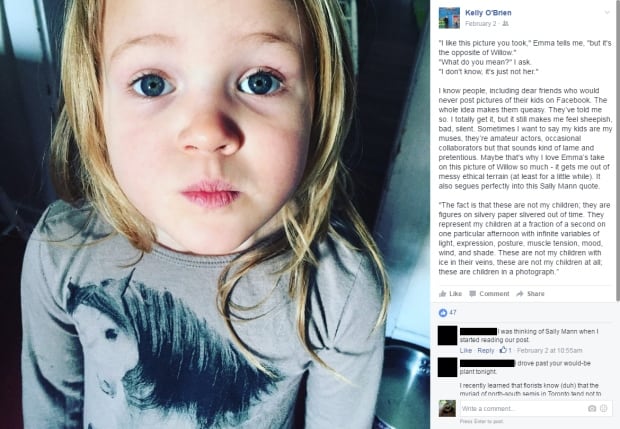 “I like this picture you took,” Emma tells me, “but it’s the opposite of Willow.” “What do you mean?” I ask. “I don’t know, it’s just not her.” I know people, including dear friends who would never post pictures of their kids on Facebook. The whole idea makes them queasy. They’ve told me so. I totally get it, but it still makes me feel sheepish, bad, silent. Sometimes I want to say my kids are my muses, they’re amateur actors, occasional collaborators but that sounds kind of lame and pretentious. Maybe that’s why I love Emma’s take on this picture of Willow so much – it gets me out of messy ethical terrain (at least for a little while). It also segues perfectly into this Sally Mann quote. “The fact is that these are not my children; they are figures on silvery paper slivered out of time. They represent my children at a fraction of a second on one particular afternoon with infinite variables of light, expression, posture, muscle tension, mood, wind, and shade. These are not my children with ice in their veins, these are not my children at all; these are children in a photograph.” (Facebook/Kelly O’Brien)

For those who aren’t among O’Brien’s closed circle of friends, she lifted the privacy settings IRL last month by debuting her work at the Images Festival in Toronto, stitching together several years of updates for a performance called Postings from Home.

An old-fashioned slideshow on the surface, with O’Brien’s serene voice narrating while her husband clicks through shots of their three young kids — Emma, Teddy and Willow — the performance is an impressionistic memoir. 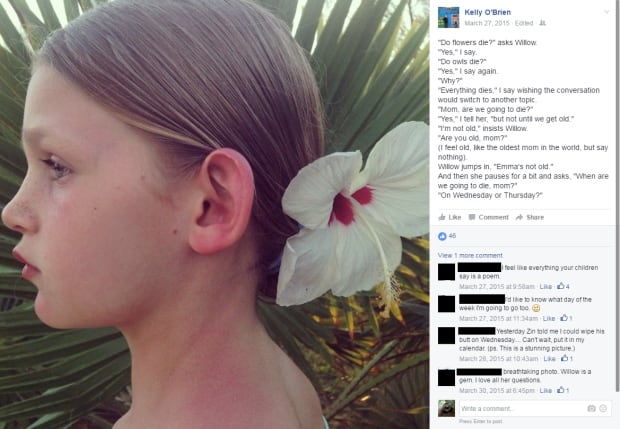 Using the ephemera typically shared on Facebook as a starting point (a beautiful snapshot, a bit of toddler wisdom), O’Brien weaves in her own thoughtful and deeply private observations, adding quotes from other artists to produce a constantly evolving essay about how we’re all connected to family, to nature, to one another. 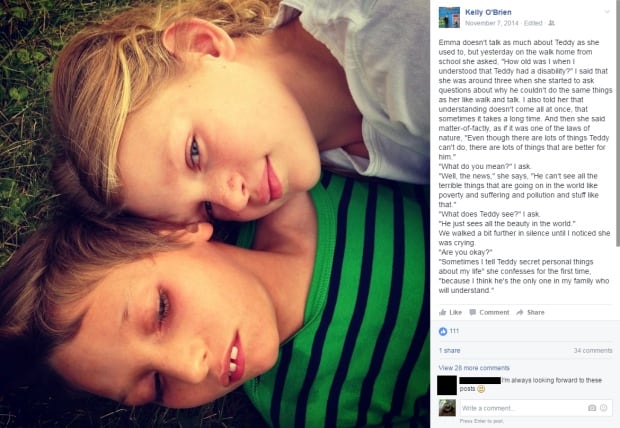 Emma doesn’t talk as much about Teddy as she used to, but yesterday on the walk home from school she asked, “How old was I when I understood that Teddy had a disability?” I said that she was around three when she started to ask questions about why he couldn’t do the same things as her like walk and talk. I also told her that understanding doesn’t come all at once, that sometimes it takes a long time. And then she said matter-of-factly, as if it was one of the laws of nature, “Even though there are lots of things Teddy can’t do, there are lots of things that are better for him.” “What do you mean?” I ask. “Well, the news,” she says, “He can’t see all the terrible things that are going on in the world like poverty and suffering and pollution and stuff like that.” “What does Teddy see?” I ask. “He just sees all the beauty in the world.” We walked a bit further in silence until I noticed she was crying. “Are you okay?” “Sometimes I tell Teddy secret personal things about my life,” she confesses for the first time, “because I think he’s the only one in my family who will understand.” (Facebook/Kelly O’Brien)

“In 2007 after my second child was born with severe disabilities, it was impossible to go back to TV work,” O’Brien tells CBC Arts. “The hours were just too long and I needed to be there for my son, Teddy.”

A filmmaker and former TV producer, “it’s not like I wasn’t creative before motherhood,” she explains, “but I would have to say that the experience of having children has enriched and inspired my creative life in ways that constantly surprise and inspire me.”

At first, she went back to school in search of an outlet, ultimately getting her MFA in film and producing a personal piece about raising her son called “Softening.”

“Most days it was too hard to make that film, it took a certain distance that grief doesn’t give you,” O’Brien recalls, but just because the moment wasn’t right to keep filmmaking didn’t mean she was going to stop telling her story. “Making that film renewed my interest in making art about everyday life,” she says, something she was already doing without realizing it. 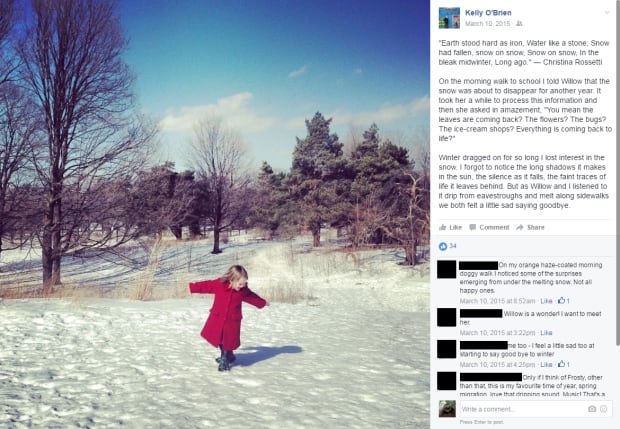 “Earth stood hard as iron, Water like a stone; Snow had fallen, snow on snow, Snow on snow, In the bleak midwinter, Long ago.” — Christina Rossetti On the morning walk to school I told Willow that the snow was about to disappear for another year. It took her a while to process this information and then she asked in amazement, “You mean the leaves are coming back? The flowers? The bugs? The ice-cream shops? Everything is coming back to life?” Winter dragged on for so long I lost interest in the snow. I forgot to notice the long shadows it makes in the sun, the silence as it falls, the faint traces of life it leaves behind. But as Willow and I listened to it drip from eavestroughs and melt along sidewalks we both felt a little sad saying goodbye. (Facebook/Kelly O’Brien)

“I must have been desperate to make something, anything! I liked the immediacy of Facebook,” says O’Brien, who by this time had a third child, daughter Willow. She made a habit of posting, but with a conscious focus.

“I wanted the posts to be more than cute kid pictures. I wanted to share something meaningful that was bigger than me and my kids,” she says, an approach that might come naturally because of her background making documentaries.

“I never referred to it as an art project. It was more of a daily experiment, a way to make sense of what was happening around me, share a little beauty, some poignant bits of conversation.” 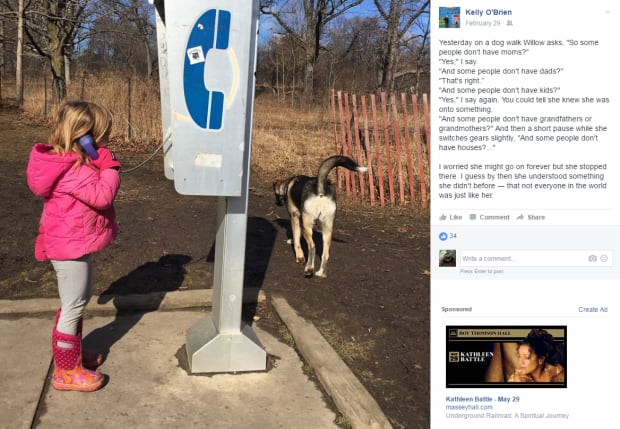 It’s only because of her friends that O’Brien transformed project into a performance, something she tested last summer at a weekly arts event hosted by her friend, experimental filmmaker Mike Hoolboom. Ultimately, she says the thoughts she’s developing daily on Facebook  — a project she describes as “a sketchbook of my life” — will evolve into a film. 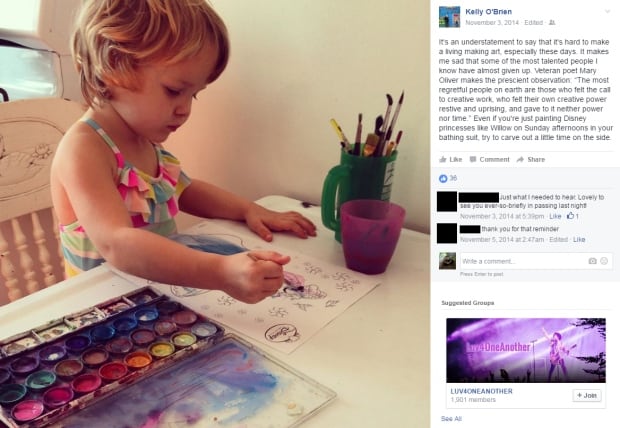 It’s an understatement to say that it’s hard to make a living making art, especially these days. It makes me sad that some of the most talented people I know have almost given up. Veteran poet Mary Oliver makes the prescient observation: “The most regretful people on earth are those who felt the call to creative work, who felt their own creative power restive and uprising, and gave to it neither power nor time.” Even if you’re just painting Disney princesses like Willow on Sunday afternoons in your bathing suit, try to carve out a little time on the side. (Facebook/Kelly O’Brien)

“This Facebook project has had some interesting side effects,” she says. “I notice the world around me more. I pay more attention to things my kids, friends and strangers say. I look for nature in the city in ways that I didn’t before. Facebook has given me a creative life that I never could’ve anticipated. It’s been like my art school. I’m sure there’s a group of people out there who are doing exactly the same thing as I am, I just haven’t met them yet.”