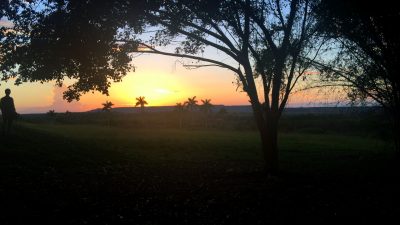 When I arrived on the island, I was a dog.

I weighed 30 kilos, a mutt of course, part terrier, beagle, wolfhound, even a little fox.

My stomach was always calling me in those days. I was hungry. Hungry and free. I could go wherever I wanted.

The mangoes told me where to find food, I spoke with birds and the roots of trees. I became friends with the rain and the mud.

Sometimes the spirits called me Diego, though my real name was…

There is a moment in a typical hunting scene where a wounded animal looks into the eyes of the hunter as it dies. How can I deny that it is alive, that it is there, that it has its own dreams and desires? Adorno says that the way you shake this off is to say to yourself, “It’s only an animal.” He links that gesture to the history of racism, and what he calls the pogrom, or genocide, against other human beings.

When I was a dog, I was never lonely. But all humans are lonely, and little wonder, when they’re so busy killing, or voting for the ones who are doing the killing for them.

But when I was a human I was lonely all the time. I spoke a different kind of language, worshipped science and machines that taught me the cruel lessons of separation.