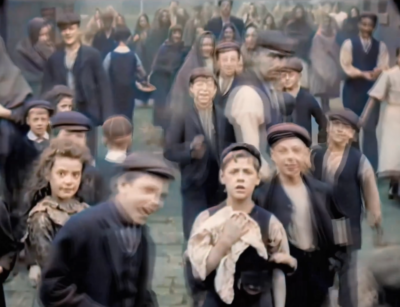 Featuring some of the earliest moving pictures of London, circa 1900, courtesy of the Lumiére Brothers, newly restored and colourized by AI algorithm genius Denis Shiryaev. These London newsreels offer street gatherings looking back at the first recording machines. All corpses now. But not before the look is internalized and absorbed as part of a new regime of power. Welcome to the origins of the surveillance state. Based on Michel Foucault’s Security, Territory, Population (1977-78).

“Spectators are transformed into workers. Cinema, TV and the internet are factories, in which spectators work. To look is to labour. Cinema, which integrated the logic of Taylorist production and the conveyor belt, now spreads the factory wherever it travels. The senses are drafted into production, the media capitalize viewer’s senses, aesthetic faculties and imaginary practices of viewers, assembled and released at regular intervals. As the traditional factory arrests its workers, the cinema arrests its spectator. Both are disciplinary spaces of confinement.” Hito Steyerl, Is the Museum a Factory?