They Are Lost to Vision Altogether (Pleasure Dome, 1996)) 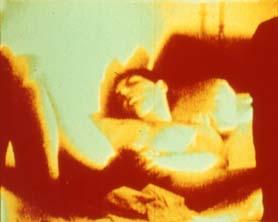 They Are Lost To Vision Altogether: Tom Kalin and Tom Chomont

What’s in a name? Just ask Tom.
Kalin brings a poet’s eye and a survivor’s understanding to the AIDS epidemic, managing work that is both personal and political, humorous and melancholic. Best known for his luscious feature debut Swoon , these brief, beautiful and intoxicating shorts are amongst the most moving documents of this generation. If your crotch had tear ducts the world would look like this. Sight Unseen 1.5 minutes 1986
Gesicht 2 minutes 1986
The opening two shorts of the program denote the way in which social space, and the images which inhabit it, come to inhabit us also. In the first, Sight Unseen, a blindfolded man turns in a vertiginous and virtuosic display in a city of signs. Gesicht takes aim at museum culture, showing well preserved specimens of our ancestors which seem to be looking back at the Sunday afternoon crowds.

Confirmed Bachelor 2:30 minutes 1994
Confirmed Bachelor tosses petals and blossoms at a fundamentalist doctor’s pseudo-medical commentary on the ins and outs of gay male carnality. This humorless spew is snatched from The Gay Agenda, a homophobic agit-prop tape distributed to the U.S. Senate by the Christian Radical Right in 1993. A collision of disco hooks, floating quotes and ripe images of nature, Confirmed Bachelor allows the language of medical pathology to dissolve into absurdity right before our eyes, smothering it in a blanket of blooms. (Vtape Catalogue) They Are Lost To Vision Altogether 13 minutes 1989
They Are Lost To Vision Altogether presents a disappearing act, a steady sleight-of-hand which erases the not-so-distant past. (Television flickers, revealing a seamless, yet slivered visual history punctuated by news stories, old movies, commercials: an unending flow which speaks to the non-existent “general population.”) They Are Lost To Vision Altogether recognizes our bodies as the ultimate site of control, a location in which the construction of identity meets the surveillance of the physical. The tape refuses to leave lesbians and gay men unseen while troubling the act of seeing itself. It also acts as erotic retaliation on legislation such as the Supreme Court sodomy ruling – declaring the private bedroom as open target for the State – or the Helms Amendment – the U.S. government’s refusal to fund explicit AIDS prevention information for gay men, lesbians and IV drug users. It is an attempt to reclaim eroticism and to address the contradictions of sexuality and romance in the face of a monolithic and culturally compulsory heterosexuality. They Are Lost To Vision Altogether finds queer history where it can and invents the rest. Perhaps most of all, it freely admits ambivalence and attempts to “not be lost or pushed into the sea of what others believe to be our collective history. The language of mass media, the gesture of medical examination, and the intimacy of conversation all act as shorthand to insist upon a politic which resides in every social interaction. Defying the reduction which would suppose that lyricism and didacticism are irreconcilable, They Are Lost To Vision Altogether invites a reconsideration of the ways in which we view the impact of AIDS on daily life.” (Tom Kalin) That poured its hot breath (work in progress) 3.5 minutes 1996
Like much of Kalin’s work in the 90s, this tape draws its material from his super-8, single-frame diaries, now drawn in two elemental movements. The first, photographed in black and white, centres round images of fire, while the second is set by the sea. These moments of men on vacation are cleaved by a text which reads: “His heart was a dark cave filled with sharp toothed, fierce clawed beasts that ran snapping and tearing through his blood. In pain he left the worktable and prowled through the room, singing to himself. Who can I be tonight? Who will I be tonight?” Periodic shots of a grave follow, and a farcical song which draws its poignance from the knowledge of all they have left behind. Hot Breath is a narrative of off-screen space, its interludes of remembrance punctuated by a furious concrete sound score. Finally Destroy Us 4 minutes 1991
This is a formalist’s scrapbook, framed by images of divers turning in arrested motion against an impassive sky. If their ascent is swift and graceful, it carries with it the knowledge that all too soon this moment will be carried away by gravity. These instants too quickly visited, too quickly receding into history, are memorialized here with a rare power. As the track croons, “Every time we say good-bye, I die a little” a succession of portraits, each glimpsed in passing, flicker past. Invariably photographed in close-up, this accretion of detail suffuses the whole with an exquisite nostalgia, these faces never to be seen again. The title is copped from Virginia Woolf who wrote: “These meetings, these partings, finally destroy us.” Nation 1 minute 1992
Commissioned by the Whitney Museum of American Art and The American Center in Paris as part of their international Trans Voices Project, Nation whizzes through questions of nations and nationality in a single dense minute. Borrowing the language of geography to consider individual bodies through topography, Nation reminds us that our bodies have been shaped by history into a series of zones to be charted, conquered, divided or made whole… Nation tries to think locally and globally at the same time. (Not without a healthy dose of irony by way of Benneton and Michael Jackson).

Nomads 5 minutes 1993
In Nomads Kalin offers up a world seen in passing, glimpses of a supernal natural world juxtaposed with travellers of every kind – pixillated city traffic, airplanes and trains. This world in motion is offered up in a rapid fire, impressionistic montage, each glimpse viewed in a whirlwind of contingency. But however fleeting, Kalin manages to endow his nomadolgy with a rare grace and splendour, all propelled by Brian Eno’s melancholic Third Uncle. Darling Child 2 minutes 1993
This is a portrait of a room, and all those who might have inhabited it. Interspersed with these domestic interiors and a succession of longing looks outside is a text by Truman Capote which flashes between these impressions.

“But we are alone, darling child, terribly isolated each from the other; so fierce is the world’s ridicule we cannot speak or show our tenderness; for us death is stronger than life, it pulls like a wind through the dark, all our cries burlesqued in joyless laughter; and with the garbage of loneliness stuffed down us until our guts burst bleeding green, we go screaming round the world, dying in our rented rooms, nightmare hotels, eternal homes of the transient heart.” (Truman Capote) Kissing Doesn’t Kill by Tom Kalin and Gran Fury :30 seconds 1990
Kalin and Fury produced four of these spots – smart, sexy, funny – each of them variations on a theme. This is the first of these interventions. I hung back, held fire, danced and lied & Information gladly given 5 minutes 1996
This kinetic memorial profers a series of quick-time portraits comprised of glances rather than stares, underlining the momentary and elusive thrall of encounter. Interspersed are names of the dead – Stuart Marshall and Vito Russo are amongst their number – providing a personal roll call of those who have fallen to the ravages of AIDS. All of these pixillated moments of encounter are fuelled by the faux naieve pop stylings of Brian Eno’s Some of Them Are Old.

Tom Chomont: Sadistic Self Portrait
Chomont began work in the early sixties, eventually producing fourty short films and a raft of new videos in the 90s. His work is characterized by a home movie manufacture, his cast often drawn from lovers and friends, hustlers and neighbours. This program is evenly divided between his solarized diary films and his new work for the small screen – S/M rituals which mark the relation of power and knowledge onto the body. “There is always a tension for me between the fact of seeing someone from the outside – as a body, an object – and seeing the identity dissolution that usually takes place during sleep. If it happens when we’re awake, it’s disturbing, we want to avoid it… When something sexual seems impossible or unthinkable, fantasies are horribly exciting, horribly intense; yet I think that’s the beginning of seeing other people as part of your own concept of reality, and that makes it hard to break through to other people as they really are.” (Tom Chomont in “A Critical Cinema” by Scott MacDonald) Minor Revisions (11 minutes silent 16mm 1979)
“Peter and I were lovers off and on after travelling together, but at the time he joined the army he was living in San Francisco, married with a daughter. He was on a visit to me from boot camp at Fort Dix, New Jersey.” (Tom Chomont) Minor Revisions is a portrait of the filmmaker’s lover who has unexpectedly decided to join the U.S. army. Chomont drafts a brief of leave taking via domestic metaphor – isolating glimpses shot indoors and collaging them together to provide a farewell that is at once lament and prophecy. Utilizing a series of solarized fruits and vegetables as metaphor for sexual union, separation and the ineffable layers of identity, the filmer teases from these simple feast preparations a summary of their time together and eventual release. These vegetable interiors close with an image of an onion, infinitely peeled, suggesting the myriad identities contained inside a lover known too well. Chomont also turns the camera on himself, glimpsed in a distorting mirror, his shifting visage trying to fix the flow of the present without success, then giving himself over to a masturbatory reverie in expectation of his lover’s absence.

Razor Head (6 minutes silent 1984)
Razor Head depicts a shaving ritual, photographed over the course of an afternoon. The initiate is bound and snipped, before a carefull cross-hatch razoring re-marks his hairline in a grid formation. These squares are lathered and shaved away. He then appears spread-eagled and naked while his barber (Tom’s older brother, Ken) sets to work removing his remaining body hair. He is released at last, hairless, and ready to begin work. Slash Portrait for Clark (6.5 minutes video1994)
This tape is a home movie portrait of the filmer’s lover, glimpsed at first in a chair, smiling in ease as video treatments lend a shimmering auratic light to the scene, as if there were visible heat rising from his body. Like traditional photo portraiture, Chomont hopes to evoke from the body’s surface some inner truth about its subject. These early shots continue to cycle over another domestic scene. A slave, naked save for boots and cap, bends down to lick Clark’s boots, then masturbates as he writhes beneath the foot of his top. A kaleidoscope of impressions ensue, each accumulating on top of another as the film progresses, demonstrating that the body is both the writer and book of its own history. A Faustian Knot by Tom Chomont and Clark Coleman (8.5 minutes 1994)
Oozing mandala shapes and strobe-lit faces testify to hidden blood secrets, while the low toned chanting and organ music give these impressions the unmistakable feel of a ritual at work. But unlike the public remonstrations of ritual familiar to most – the mass or ball game – these Sunday ministrations are delivered in private. Indeed, much of the film appears as if shot inside the body itself. Nonetheless, the aim in both instances is the same: transformation, ecstacy and deliverance. A masked priest arrives in leather, wearing a cloak. He tortures the supplicant’s cock with cigarettes, offers blood from a chalice, burns his cock. He binds the face, slaps his balls, binds and pulls on his cock. The Faustian knot of the title? That knowledge of the self necessarily bears a price, that in order to pass over the limits of usual understanding we need to subject ourselves to ourselves, to the terrifying journey inwards. 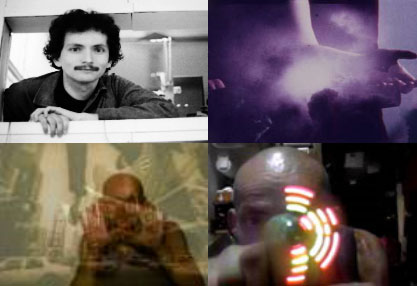