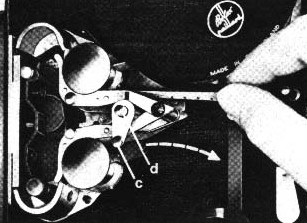 This Room is a Camera
Good evening and welcome to the Funnel. I’m afraid there’s been a terrible mistake made tonight, that you’ve all been deliberately and conscientiously misled here for an evening of films made without cameras. We should probably begin by admitting that there has existed from the very beginning of cinema a long tradition of stitchers, painters, sewers, staplers, scratchers who have all applied their art directly to the surface of the film. There are also those who followed their doctor’s prescriptions for sound health and began to make films without images, a mede cine, sound films that imagined that even if we no longer lived in the same house with our mother and father we still existed for them, as an image in the mind, that images were a relative thing and that our coming to the movie house today was only to re-order the huge store of images we take with us everywhere. It seemed at first that tonight’s program was simple enough, that we should re-member or put together some of this unshot history, this cameraless film. In the Latin root of the word camera meant a room or chamber, usually a bedroom and don’t we say as someone who takes up a camera, don’t we like to speak of a developing relationship, a sensitive emulsion, of marrying sound and picture? Finally these pictures are gathered, projected on a wall which we call in French l’amur, the wall, l’amur or l’amour to love. And this wall of love has three other walls to contain it, which recalls for us again this Latin root of camera as chamber, which is the room our dictionaries tell us where a judge conducts her business, a judge’s chamber. I wondered if there was any way to come into this chamber, this movie house, without judging, and that if there wasn’t then it would be impossible to speak of a cinema without cameras because this room, this room here is already a camera. Difficult Music by Laurie Anderson 2 minutes imageless
An introduction to sound film by a woman whose performance “Utilizes the banal vulgate of contemporary media, laced at time with remnants of ‘folkie’ recollection… there is no fundamental self-dreaming of the space or voicing the texts of United States and so it follows that Anderson’s deadpan distress displaces the terrors encountered on the way. On the other hand, her tactics open up to a communion with an audience charged almost constantly with recognizing the ‘familiar’ and the terrors are recognized for being found on common ground.” (Bart Testa, C Magazine) Knot by Kaiser Nietzsche 5:20 minutes image 1986
Sound film by these local purveyors of oral delectation. KN may often be found in the company of flocking photographs or mailing their way through the Canadian snow. Mothlight by Stan Brakhage 4 minutes silent 1964
“His most radical exploration into the inflection of light through his raw materials initially occurred in response to his oppressive economic situation. When he had no money to buy film stock, he conceived the idea of making a film out of natural material through which light could pass, the clue to this came from his observing the quantity of glue and paint which Stephen Louis had put on his film A Portrait of the Lady in the Yellow Hat (1962). Brakhage collected dead moths, flowers, leaves and seed. By placing them between two layers of mylar editing tape, a transparent, thin strip of 16mm celluloid with sprocket holes and glue on one side, he made Mothlight as a moth might see from birth to death if black were white.” (P. Adams Sitney, Visionary Film) The Wold Shadow by Stan Brakhage 3 minutes silent 1972
“Wold” because the word refers to “forests” which poets later made “plains” and because the word also contains the rustic sense “to kill”… this then my laboriously painted vision of the god of the forest. 14/2/87 by Peter Chapman 5 minutes 1987
Live piece for two tuned projectors with super-8 film loops and sound on cassette. “Photographs are better than any possible memory we could have of them or of the images they record. This piece is only as good as your memory of it.” P.C. Nature’s Gate by Jim Anderson 10 minutes 1987
Upon waking this morning I found myself high in a tree. What you see is really here. This is no print. Appropriated Moment by Caroline Wuschke 20 minutes
Appropriated Moment is a Dadaist subversion of structuralism. Wuschke has taken the notion of “ready-mades” as originated by Marcel Duchamp and applied it to the work of her partner Peter Chapman 1-51. The “appropriated” film was made by Chapman while he was an employee at Best Labs, a firm which does technical work for the CBC. During this audio-visual stint, Chapman engaged in his own version of appropriation. He found a 20 second shot taken in Cincinnati during an American Bicentennial celebration and decided to process and print it over and over again. Each day, for 51 days, Chapman printed the deteriorating images of the initially banal documentary sequence. What seems ordinary to begin with gradually takes on new shapes and meanings, eventually forming itself into an abstract filmic piece. One can explicate the interior structuralist approach by Chapman in 1 to 51. That was one work, however, and Appropriate Moment, is another. Wuschke’s gesture in naming and claiming the piece creates its own curious set of resonances. The first question arising from her film is that of ownership. By taking Chapman’s signed film and claiming it as her own is she not seizing a series of moments in his artistic life and making it her own? In Duchamp’s ready-mades, he suggested that bicycle wheels and urinals could be perceived as art objects if placed within gallery walls. Wuschke is similarly arguing that placing Chapman’s work in another context makes it her ready-made film. The question of authorship, once opened, raises additional questions. Chapman’s film was based on a shot of a balloon rising on a summer’s day in 1976 against a backdrop of a skyscaper. There was a statue in the foreground of the shot and a tree on the right side of the frame. The sequence features a zoom and a tilt skywards and a slight zoom out. This original material was shot by an unknown cameraman. Neither Chapman nor Wuschke knows who shot the footage or if that unknown cinematographer was operating independently or on instructions from a director. This is indeed a production where an audience’s call for “Author! Author!” could create a crowd scene. Retreating from the problematic to the personal creates yet more questions. Wuschke is Chapman’s partner. She appropriated the piece becaue they have a 50/50 property agreement. Wuschke considers Appropriated Moment to be her contribution to the debate concerning “girlfriend/boyfriend” films. Most works directed by young filmmakers – particularly female cineastes – are interpreted in terms of their relationship to their “older, patriarchial” filmmaking partners. Wuschke’s work has the great virtue of making this “dirty little secret,’ one of the central issues of the film. What could be more of an homage to one’s mentor than to take a totally complete work and re-name it your own? Caroline Wuschke’s film can be analyzed in these ways because it is an “open” work. Whereas Chapman’s piece is a wonderful exercise – the balloons gradually turning into microbes attacking the building are notably exciting sequences, it is an example of a hermetic approach to filmmaking. One’s analysis of Chapman’s work would dwell on structuralist and technical concerns (viz. “why the green blotch?”) Appropriated Moment with its questionings of sexuality, dominance, and authorship is a different piece, more in keeping with contemporary feminist and political concerns. And its greatest virtue, is like its precursor 1 to 51, practically undiscussable. Appropriated Moment is very, very funny.