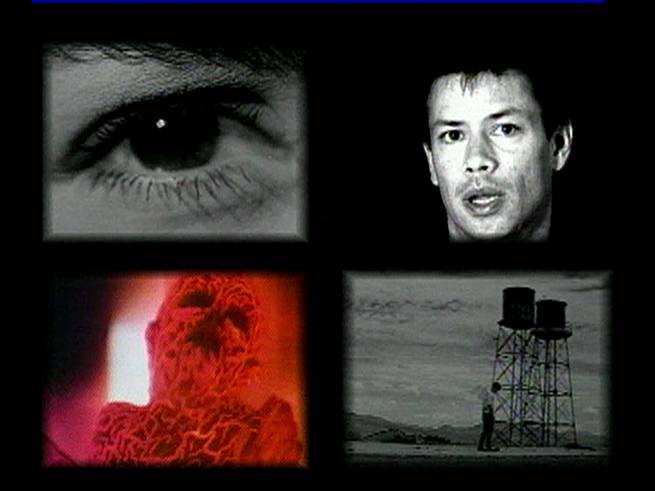 Colin: I have read that a driving motif in your work is the beauty of the body and its tragic temporality. Is this true? What other ideas are you trying to address in your work? (I have seen and will be talking about Hey Madonna, Positiv, Imitations of Life, In the Dark, and Stormy Weather if that helps)

Mike: Having seen my work, I wonder if you feel that its driving motif is the beauty of the body and its tragic temporality? Or whether this description you’ve read is designed, like any description I might offer, to replace the experience of the work, to convert cinema into words, and to turn it into digestible soundbytes. Talking, as Mike Snow pointed out often in an interview I did with him, always means not saying enough. And while ‘we’ are supposed to be living in a brave new world where media hip young and oldsters are busy making cranial downloads of post-literate digitalias, it has been my experience that anything straying far from names and naming doesn’t ‘read’ as anything but lyric noise. In Imitations of Life , for instance (the feature not the short), one of the ten chapters is wordless, and it’s rare that cogent discussion ensues as a result. Though the fault could lie with me of course, perhaps there is a nagging ambiguity in this chapter which refuses the surgical precision that language so often requires. Perhaps the construction, the foundation, is unsound.

So why not write a book instead?

Because there is something in the image, when the image is produced (or reproduced), which exceeds description. As someone who was raised around books and libraries I have a word for this too, I call it the unconscious. Which is to say, I am professing to you a faith, a creed. I believe that there exists in each of us, and for that matter in the work itself, something we might name the unconscious. And I believe it functions unconsciously. No use asking me what the unconscious themes are in my work, I will be the very last person able to answer. One thing is for sure, if there are consistent themes or repeating motifs, none of this has any truck with the unconscious. A few words about the body.

My body is also a picture. It creates and destroys, ingests and evacuates, and inside I am host to a teeming ‘inner’ life of other beings (my body is a hotel), that some (forensic experts for instance) might consider ‘my real life.’ But I am largely ignorant of these creatures, just as I am ignorant of the workings of my organs. What I am slightly more cognizant of is the way my body hosts other pictures, even as it becomes one. You mention the word ‘beauty’ in your question, and surely we have all learned about what is beautiful by watching pictures, even as we are busy turning each other into pictures. This one is beautiful and this one is ugly. These standards, this ‘common’ sense changes over time, and across cultures, and in our culture, woven and wefted by pictures which are broadcast (whose express purpose is accessibility, availability, which are designed to produce the tribe, to produce ‘us’) it is often pictures which are determining the beautiful, even if we don’t see them. This notion gives me some hope, for perhaps obvious reasons. I believe that pictures can ‘work’ even if they are unseen, I believe the simple (or not so simple) act of their creation carries a charge, or at least, that it could carry a charge. The sad truth is, that while there are more pictures being created today than ever before, most of these pictures are copies. They are not quotations, that’s something else, that’s the business I’m in, at least temporarily, but the kind of moving picture thinking involved, the emotional outlook, the frame which is around the world before the camera is ever hoisted, all this has arrived second hand, as borrowed news, as someone else’s necessity. It is not possible to make pictures from this borrowed perch, as you will see very clearly when you watch the films your friends make at the end of this school year. Some will produce real pictures, but most won’t. And the damning thing is that mostly media makers are rewarded for copying, not for inventing. To invent means risking genuine failure and incomprehensibility. My body is a picture of me ‘all in one place.’ I’m ‘all there,’ ‘all in one body.’ This is not the way I experience the world, which arrives in rushes and flows, in dead time and ‘real’ time, in instants which vanish and others which seem to go on forever. Because I live in a city, my experience is fragmented, digressive, simultaneous. My body is not like that, it presents a single surface (there are many things below the surface, but that is not part of my usual image of the body, when my body is busy turning itself a picture (when I get dressed in the morning for instance), it is not my intestines that are at play, only the surface). And it’s true, my movies are concerned with articulating this surface, its hopes and demands; and wonders at the same time if the images of the body could change, or what would happen to my relation to my body if, for instance, I stop watching television. Could I be a conduit for greater or different kinds of pleasures? And could a cinema be constructed or imagined that might facilitate those pleasures?

Colin: Some of your pieces are more about the voice or narration than the actual image (some are void of images). Could you just explain this decision because I think it’s brilliant.

Mike: I come from a fringe film background, film as film, we were emulsion watchers, looking at flickering light in the dark. This work is particularly visionary, or at least vision oriented. Words were mistrusted, for the most part, though of course there were exceptions, Annette Michelson wrote of Hollis Frampton that he ‘strained cinema through language’ but Hollis was the exception to every rule. Another hapax legomena. These qualities of very rigorous looking, of being able to notice minute details or changes in an image which might not shift for a very long time, was part of a masculinist notion of image practice. Not that girls can’t make tough movies, but the tendency towards abstraction, the refusal of the social, the wordlessness, the silence, the fixed frame or long take, the ‘universal’ values, all this dealt a man’s hand. I was never at home in this world, and switched to video by accident in the late nineties, and began again. In video the image is too crummy to produce vast iconic work (for most), and it was the videos of Steve Reinke which at last liberated me from the censorious prohibitions which were part of the male film world. We recently attended a festival of fringe media in Windsor which is dedicated to exactly these kind of white male rigours and someone asked Steve, “Why do you get to talk?” His tapes are filled with his perfect, mellifluous voice and exacting intelligence. While I can’t pretend to match either, they were a necessary reminder that an image can be made with words. Godard has been busy demonstrating this for years. In his Dziga Vertov period, he announced that the picture-sound relation was akin to class warfare, and that the dominant and dominating picture track would be held down in the Dziga Vertov work he would make with Gorin, so that the soundtrack could take precedence. Colin: The pieces I have seen of yours are very narrative. What makes a good narrative in your opinion?

Mike: Pleasure. This pleasure can arrive in different ways, sometimes it’s enough to become someone else, to feel what they feel. I occupy their body like a parasite, I feed on the orchestration of emotions and experiences which the narrative provides, and once my (insatiable) appetite is slaked, I leave. (I have been taught how and when it is slaked of course. There’s a feeling in ‘my’ gut that says: this is the ending. It is a feeling I share with most of the rest of the audience, at least if we are watching corporate media.) There is another kind of narrative pleasure, which Irigiray describes so well in books whose titles I’ve forgotten. It is the pleasure of being lost, of wandering in a city whose language is strange, whose signs and customs are unfamiliar. This is also a great delight.

Colin: A lot of your work deals with the topic of HIV and AIDS which is something the movies hardly ever address. Can you see that ever changing, or do you feel that things have changed since the 80’s even if it’s in a small way? What is your feeling on the representation of AIDS in Hollywood, and what changes would you like to see in the future?

Mike: There are libraries filled with movies about AIDS, though not so many are of the well distributed feature drama kind. Most have been made on the cheap, or at least cheaper, and forgoing the prohibitions of broadcast have sometimes allowed them to express points of view, moralities and new frames which wouldn’t be considered ‘acceptable’ or ‘viewable’ by what current goers continue to call the mainstream. What is my feeling about the representation of AIDS in Hollywood? We are living in the midst of a global pandemic right now which has already killed millions of people. Millions more will die because they are too poor to afford the medication they need and not well organized politically. If I didn’t have access to drugs I would be dead right now, and this urgency impelled my work in a very direct way for many years. Then the cocktail arrived, and apart from the fact that it sometimes caused heart attacks or that it came too late for some or that others were allergic, it seemed as if some kind of corner had been turned. As a fat first worlder, my corner was turned, and the reason that money was made available for research, the reason that drugs were cleared quickly, the reason that there is public awareness around AIDS is owed very much to activists around the world, and the tireless work they have done. For many the corner has not turned. If they starred in a Hollywood film, if their life story was told, if we knew who they were, they would not die. But they are poor and worthless and unseen.

Can we expect ‘Hollywood’ to take up this cause? Hollywood is another instance of corporate media and it is difficult to imagine these folks caring about the plight of anyone without disposable income. Race enters this as well. The epicenter of the illness is in places where people’s skins are black or brown, and when was the last time you saw a Hollywood film in any genre that could boast a cast like that? Is that disappointing to me? You bet. Is the fact that my work, as a white person, continues to articulate ‘whiteness’ troublesome to me? Sure it is. What I’m trying to do about that now is to be more specific about how that is happening and what I can do about it.