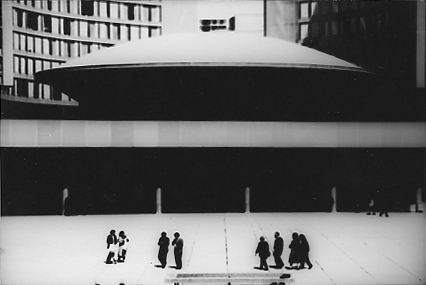 “Behind the wheel you are like King Midas. Everything you touch turns into Toronto.” You are the audience, the man on the reel is the guardian of a guided tour through a soul landscape made of desire, sex, memories and an emphatic lived relation to death from Canadian filmmaker and curator Mike Hoolboom. Each presents harmonious examples of the special tone in these impressionistic travel tales, featuring strong literary meditations about national and sexual identity. Everywhere there are friends and the inevitability of bodily decay. And again and again Toronto, Hoolboom’s home city which functions as a cipher for the encryption and encasement of the body, made possible through technology a cool Protestant pragmatism. In Mexico , Toronto lurks behind each path and obscures the view of the original aim of the travel. Like Chris Marker’s Sans Soleil , the travel to the alien country is an escape which brings the traveler closer to himself and to his home. The images are false (the film talks about Mexico but is photographed often in Canada) and for each mention of the Canadian metropole, in the commentary spoken by the director, it would be nice to have a beer. The voice-over is the strongest narrative element in Hoolboom’s work. Dense visual moments like a bullfight or a karate class alternate with sequences where the material arrives casually, sometimes as an illustrated text like the found object of Escape in Canada or in the form of the opulent in In My Car . Many of his strongest moments deal with gender issues, homo-erotic or queer identity politics as well as AIDS as a metaphor for the limited and unpredictability of the body. Frank’s Cock , his most famous short film, captivates through the strength of his narration. A young man, if he is an actor or not is kept ambiguous, speaks in front of the camera about his relation to Frank about sex while the radio is on, recipes of omelets and about Frank’s cock. In addition the montage features details of old porn movies, footage of a ballerina, and in anticipation of Frank’s tragic death of AIDS microscopic images of body cells, blood moments and beneath the skin fauna. What remains are memories lived in the present.

In such moments the work of Hoolboom speaks of an imperturbably, unsentimental brutality. This vitality has translated to other formats, Hoolboom is also the author of several books and many texts about avant films as well as fringe cinema and is well known as an experienced lecturer and speaker which you can see for yourself in his Viennese presentations hosted by 6Pack and DV8.