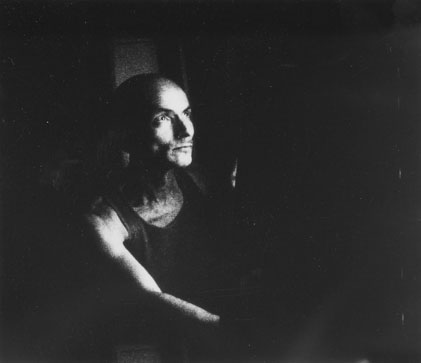 Watching Hoolboom’s Tom (2002), the viewer has an uncontrollable feeling that the film draws the space of perception ever tighter due to the pointed assertions of the portrayed obsession. At the same time, however, it/he also broadens the spectre of possibilities of escaping from them. The escape is usually offered through a second picture, which is glued not behind, but right into the first picture. He composes his own shots together with appropriations from others (not only does he take them, but he manipulates them by visible modulations which change the content as well as the material of the film). The quotations are often momentarily only aesthetical, but over the whole span of the work they create Hoolboom’s personal history of cinematography (which he actually writes in most of his films). For instance he quotes a watery mirrored moment from Cocteau’s Blood of a Poet alongside independent American director Darren Aronofsky’s 70-years-older Pi. This is the history that Tom Chomont enters into, a man obsessed by film in all its forms. Hoolboom, a close friend, dissected his character/figure using two layers/sections. There are narrations about film, which run visually in combinations of video, super-8 and photographs, and then a narration about Tom’s life, which is illustrated by a jigsaw of Tom’s own work and other appropriated moments.

Tom reflects upon the memory of film, its impersonality, and its potency of personal testimony. On the one hand, Hoolboom works with film in an abstract and distancing way, on the other hand, he himself figures in it, these are diary moments after all, and Tom openly talks about intimate matters. His work recalls the very roots of film. He is aware of the outgrowths from the Lumière brothers and Meliès, but also figures like Busby Berkley (even through direct quotations and imitation of the work-style in scene choreographies that are completely different, even symmetrically opposed, to his own means and methods). However, he modulates and recreates aesthetics into a position in the material category: beauty lies no longer in what is filmed, but in the film itself, through stratifications and the overlaying of materials which create polemics about the value of the preserved picture, or about the possibilities of its communicativeness. Being placed into a new context, its meaning changes markedly. Tom Chomont is a being growing up out of these twisting meanings, tossed between, but also caught inside, the snares of memory. Again and again moments of his past float up to the surface – incestuous experiences from childhood, the anger felt against his parents, and sexual frustration. For Hoolboom, film in general is perceived as a machine which holds memories in an ambivalent relationship. The two biggest horrors are reputedly the fear of the end of the world and the fear of memories. His movies are a reaction shot to these fears. He tries to reverse/change the existence and development of film into the position of the image of the future; the future-image. He offers this as a critical stance, though he is also charmed by this state, or better, by awareness of it (because in the moment we talk about ourselves as images, this awareness becomes the key to the original sign/symbol/mark).

“Mike Hoolboom’s mind is as fast as his cutting,” says the director Dirk Szuszies. In most of his scenes, slow moving elegance and peaceful images are absent, and when they turn up for a moment, they are instantly distorted again. The image is disrupted by another image, or a soundtrack intrusion. The present film constantly returns to its image origins, it persistently seeks out its roots. Little surprise then, that Imitations of Life (2003) should be narrated though a child, who accompanies the childhood of cinema, in a ten-part fable that writes a personal history of film. Imitations remakes history as a home movie. And then suddenly a man paints a fence for five minutes and in the second/double-exposure another man (actually a double of the first man created by reversing his image spatially and temporally) wipes away this paint again, eliminating the work and the image of the first one. When the white wall is painted black, then unpainted to white, is time to begin again. Even in his first films, all layers resonate with a view. The voyeuristic look of a child, who sees something he/she wasn’t supposed to see, is connected with the root voyeurism of the film spectator. The possessive view of the mother is joined with the physical intercourse of two males who mirror a cruel and controlling love, but also turn it into a kind of play, which is desperately and ferociously embraced by a Tom-like Tom who grows ever more decrepit as AIDS takes hold of him. His pictures tremble, and in the end his character has migrated into an observer who is able to look back through the conservation of photographs. I am also this picture, this pose, the boy standing inside this frame. Hoolboom’s canny manipulation of materials, both those that are being filmed, and those already pictured, wholly appropriate the object portrayed, but at the same time allow them to spread itself into the infinite space of film. The world is not infinite anymore, he says in Imitations of Life. Its infiniteness has been taken over by film, which now only asks: How will you invent your future (through me)? 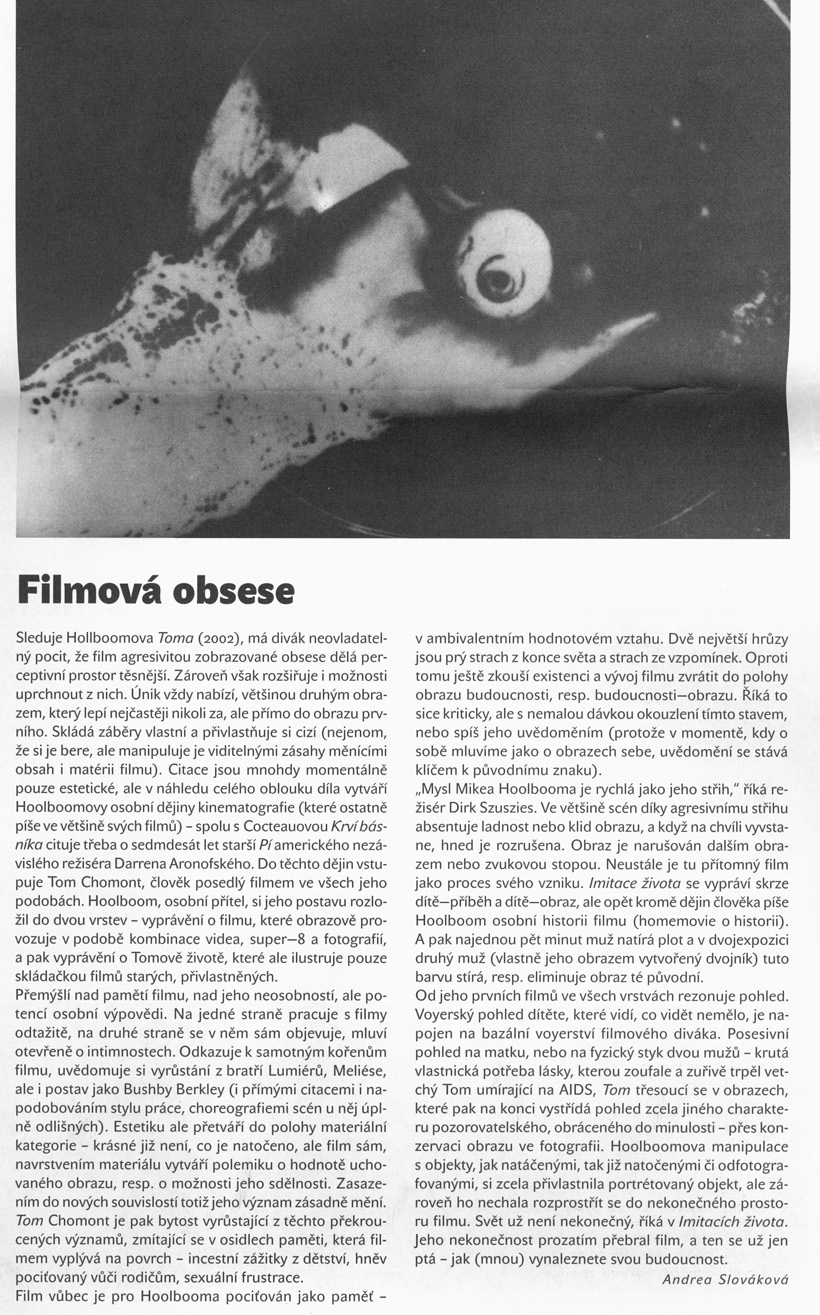