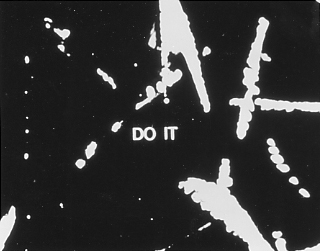 The Big Show 7 minutes, 16 mm, 1984
The Big Show is a light reading letter for its audience, offering up in a succession of printed intertitles, language as the event that takes place. Processed by hand in the filmmaker’s bathtub, the titles struggle to speak beyond a surface disfigured in their development. Fourteen titles appear in all, letrasetted on black cardboard stock, then photographed on high contrast b/w film and processed by hand as a negative to produce white titles on a black ground.

1. The Big Show
2. Please Stand
3. Please Keep Your Lips Together and Your Teeth Apart
4. Make A Sound Only You Can Hear
5. Please Take Both Feet From The Floor
6. Please Cough Belch or Fart
7. Make A Sound Only I Can Hear
8. Is This Like Being In A Foreign Film Without Pictures?
9. If There Was Only One Image Left In The World Would You Be Alone?
10. If You Shut Your Eyes Does The Film Stop
11. Where Is Your Image Now?
12. Please Move Both Hands Together
13. Imagine Yourself Living In A Better Film Than This One. What Would You Do Next?
14. Do It.

This film, along with White Museum and Now, Yours, make up a trilogy of miniatures that take aim at the movie theatre as the subject, object and political arena of address. Its primal scene could be located somewhere down the length of Mike Snow’s filmed loft in Wavelength ” as I watched it flickering between boredom and fascination it simply seemed to me the first film I’d ever sat before that required my attendance. Something in the shot-countershot montage I’d learned as a child rendered these works complete, already answered, self contained” spectators just seemed like dressing. But with Snow’s elongated stare of a home movie the film was alive only in the exchange between screen and spectator. I felt that if I didn’t make the trip down his loft it wouldn’t happen” but that ET would still come to earth, Bonnie and Clyde would still get blown away in slow motion, and Batman would still get the girl. It wasn’t my fascination that was the teacher that day but my boredom” mind wandering into shopping lists, familial trysts, adverts, blowouts, happenstance” as I snapped attention back and forth between Snow’s room and my own they began to inform one another. And that was a revelation for me. That spectators made films. That cinema was driven by control freaks who demanded quiet and don’t anybody move around and make sure to face the same direction. As I walk through art galleries I imagine what it might be like if film had been invented before painting” each work would be veiled with a chair looking on. Taking a seat, velvet clamps would secure attention while a shroud lifted for a duration deemed appropriate by the artist.

I began to think of ways to give the theatre back to its audience. I would go to the movies and face the other way. Wait for crowds to show up on television and record them on video, playing them over and over. Then it came to me as I watched The Price is Right -these people are being told when to laugh, applaud, cheer, groan” all according to an electronic text. I wondered how this text might read alone, without the dressing of the show. So I shot a single title and projected it for ten minutes. It read: “Please Stand.” Conceptually sound, but very dull. Kind of like filming an exit sign. I know what you’re thinking. That you could have told me that already. But wait, I wasn’t finished yet. I started thinking about sound” this would be a silent film but people could make their own soundtracks and I might be able to help with a few suggestions. I wrote a card saying, “Please Cough, Belch or Fart” and “Make a Sound Only You Can hear” and ” Please Move Both Hands Together.” Others were more pointed: “Is This Like Being In A Foreign Film Without Pictures?” (Imagine yourself stuck in a film which only plays the subtitles) and finally: “Imagine Yourself Living In A Better Film Than This One. What Would You Do Next?” I’d leave that one to the end.

I filmed the cards and thought about it some more, feeling this wasn’t enough yet. What else? A closing image? Sound? I finally decided to hand process the titles, both for reasons of economy (I was broke) and to lay a stress on the film’s ability to relay messages. I processed in a very hot developer, then scalded the emulsion and began stripping it away using rubber gloves. I left some parts alone as I aimed for a progression from legible to obscure to legible to obscure again. I released it as a ten minute thing in 1984, then chopped four minutes out in 1988. I think I’m a little more patient now. Now I wish the film was longer. If I made it today it would be at least half an hour. So it’s just as well it’s finished.