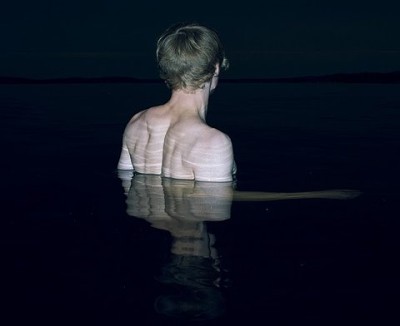 Frank never had a problem being gay. He said his first sexual experience was in the hospital in that room where they put all the babies in wicker cribs with their names on them. He can remember pulling on the knob of some just born, trying to pull it off figuring he might need a spare when he got home because he only had one. So that’s how his mother found him. Wanking off the new born.

I was always-my parents weren’t too big on gay. You remember that ad with the preacher holding the shotgun standing beside his son and he says, “If I found out my son was gay, I’d shoot him” and the son says, “I think he’d like to shoot me anyways”-it was kind of like that. I used to go out with this girl in high school-we were more friends than anything-and when I told them I was gay I think they blamed it all on Donna. Like she was an ambassador from the country of women but she’d fucked up, so I was never going back there again. But that wasn’t it at all. I was just into boys. And numbers. When I was eighteen I wanted to be like the Michael Jordan of sex. Wayne Gretzky with a hard-on. I was really into group bangs where you just slip it in a couple of times and move on. I thought of it like running up the score. Until I met up with Frank. He was older than me, almost thirty, and we hit it off right away. He said, “Are you into fantasies? I do five.” “Oh yeah?” “Yeah, rookie-coach, older brother-younger brother, sailor-slut, slave-master and father-son”. I picked older brother-younger brother and we’ve been together ever since. He said a Canadian was someone who could open a beer with anything and showed me how to open a beer with my teeth. It took me awhile to get the hang of that. Taught me how to build a box kite and fly it over Land’s End. Showed me how to make an omelette that would rise until it was as big as a man’s head. Frank had a thing for omelettes, I guess he got it from his dad. His dad signed on for the Vietnam war and got caught behind the lines in Phnom Penh; spent the next two years on bread and water in a hole without light or people. You know how he managed? Eggs. He thought of every possible way you could ever make eggs. Boil them, bake them, soufflé them… So when he got out, the first thing he asked for was an omelette, six egg omelette. He ate it and had a heart attack, died right there in the restaurant. Frank always said that was a good thing because the rest of his life would have been such a let down. But he never said it without crying.

And then there was Frank’s cock. I mean, I know that size isn’t everything but it just seemed to fit, you know? As soon as I got him inside me I felt like I was home, like for the first time in my life I knew what home was. They say you can tell the size of a guy’s dick by his hands but Frank has these little pastry chef fingers. When I met him I thought he was padding, you see a lot of guys on MTV doing it, skinny little guitar rats with a bulge that runs halfway down to their knees courtesy of Kleenex but Frank didn’t need the help. And a lot of guys, if they’ve got a really big dick they can’t get it hard, half mast is about all they can manage and believe me I’ve tried. I don’t know why, maybe if their cock filled up they’d lose so much blood in their brain they’d pass out and die. No one ever touched me like Frank before, like we had all the time in the world. We didn’t know back then, not too many people did. He had sex the way other people go to the opera. He’d pick out a day on the calendar and go okay, this day here, the fourteenth, we’re going to fuck, and when Frank said fuck he meant we’d go at it all day. The phone’s jacked out, the door’s closed and always he had to be listening to the CBC-you know Peter Gzowski, Morningside, do doo doo doo doo. At first it was hard, you know, he’s got his tongue around my balls and jerking up and down on my stick and my eyes are rolling back in my head but all I can hear is, “So uh when did you know that your blues band wasn’t going to make it and that you should run for prime minister instead?” It was just a little hard at first to keep my head inside the radio and my balls at the same time but it was a thing with Frank-when he got it on he liked the feel of the radio waves going through him. It connected him somehow to everybody else jacked in across the country. It’s hard to say. I just think he had a hard-on for Gzowski.

I never had anyone lick my ass before. I know I’m going to sound sentimental but everybody’s got their own way to worship.

We’ve been together nine years now. December will be our anniversary, our tenth, but I don’t know if Frank’s going to be around to see it. He’s in St. Paul’s now-they got a whole ward of guys who look just like Frank-AIDs ward-and when you first walk in and see him it’s kind of a shock. I mean he’s lost a lot of weight and he’s got these marks on him-that’s the karposi. But when you start talking you realize he’s inside all that same as ever. I saw him this morning and he said, “The body has never believed in progress. Its religion is not the future but the present.” You know? He’s always saying crazy shit like that. So nothing’s changed really. Except he’s dying. I’m going to miss him. He was the best friend I ever had.