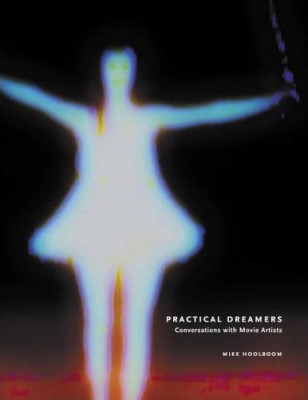 “Taking its title from Man Ray, Practical Dreamers comprises 27 conversations between the author (a respected veteran filmmaker himself) and Canadian fringe film and video artists on the subject of how and why they put their thoughts and dreams into moving pictures. The interviewees represent the range of perspectives being explored in film and video today and speak candidly about both specific inspirations and their general creative philosophy. Like Hoolboom’s 1997 Inside the Pleasure Dome , this compendium is sure to connect with fringe-film aficionados but also prove enjoyable for the casual reader.” Canadian Art, Fall 2008

The streets are full of admirable craftsmen, but so few practical dreamers.  Man Ray

What if there were movies made the same way as suits, custom-fitted, each tailored for one person? Not theatres around the world showing the same pictures, but instead a movie just for you, a movie so particular, so peculiar, it could cure night blindness or vertigo? Welcome to the world of fringe movies. Here, artists have been busy putting queer shoulders to the wheels, or bending light to talk about First Nations rights (and making it funny, to boot), or demonstrating how a personality can be taken apart and put back together, all during a ten-minute movie which might take years to make.

‘Once again, the indefatigable Mike Hoolboom – known far and wide as an accomplished, courageous and prolific film/video artist and a gifted writer – provides a much-needed service to his Canadian filmmaker colleagues. His breakthrough earlier book of interviews, Inside the Pleasure Dome: Fringe Film in Canada, provided an extensive and generous introduction to Canadian avant-garde cinema. Hoolboom’s Practical Dreamers is not only a fine addition to his oral history project, it is a remarkably readable and energetic volume, an engaging gateway into an immense and intriguing cinematic world. Practical Dreamers is film scholarship at its most useful and enjoyable.’  Scott McDonald

‘Mike Hoolboom is the insider chronicler, confessor and champion of the Canadian media-arts fringe, a concept he invented and has himself embodied for a quarter century. Introduced by knowing, personal and pithy capsules, these interviews with 28 cutting-edge young and not-so-young artists are (in alphabetical order) complicit, devoted, fastidious, generous, intimate, obsessed, observant, patient, witty … Did I say seductive? Mike draws out the best in these fascinating characters who are stitching together our collective imaginary, and compels us to rush out and catch their work – as well we should if we care about the future of Canadian moving-image art. Warhol has been eclipsed; in the future everyone will be interviewed by Hoolboom.’ – Tom Waugh, Concordia University

‘Everyone should read Mike Hoolboom’s  and see the work of his more than two dozen moviemaking subjects. Hoolboom opens up a vast territory of investigation and playfulness about films that have the particularity to make us feel right at home. The task of seeing the films, like reading this book, takes a bit of work, but it’s worth it. The prerequisite is an open mind. (We can do that: Not long ago, no one would dream of eating raw fish, and look at us now.) Hoolboom’s primer assists us in grasping the meaning of the work of some of the more obscure film artists working in our midst. His interview style is unmatchable: His introductory paragraphs are provocative and lucid. The writing reaches back in time and into Hoolboom’s own excellent work and filmmaking experience. He infuses with fleet phrases an aura of significance to his subject. (Where is his interview with himself?) By conducting the interviews on paper (or by e-mail), he elicits the wit and insight and the very thought processes of his subjects. This work is in the tradition of Godard and Truffaut and other filmmakers who became devoted to an examination of the work of their peers.’ (Gail Singer, Globe and Mail, Top 100 Books of 2008)

Order it from Coach House Press for $29.95
(Free shipping in Canada, no GST!)