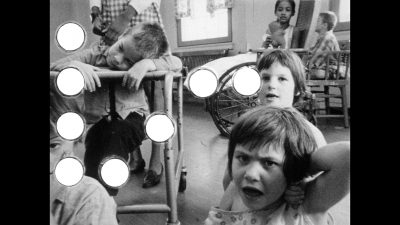 Scrapbook by Adi Chesson
A Refuge in which Film Can Be Reinvented: Film Festival Marseille Part 2 by Henrike Meyer

“I couldn’t tell if emotions were somewhere in my body or a place in the city.”

Mike Hoolboom is a director sensitive to the question of difference, to those who continue to live and work in the margins. He is now emerging as one of the most innovative filmmakers from Canada, a country which has also produced talents like Guy Maddin, or a younger generation represented by Félix Dufour-Laperrière or Theodore Ushev.

Donna evokes this dilation of time several times by browsing through this motion-picture album filmed in her youth (the movie’s pictures are the “scrapbook” of the film’s title). These compressions find their echo in a weighted soundtrack composed by Stephan Mathieu. The track operates a distressing counterpoint between sound and image, its ambient sounds opaque and mysterious, its obstinately dissonant tones suggesting the fear that underlies centres like this, before the advent of community-based health care. A Refuge in which Film Can Be Reinvented: Film Festival Marseille Part 2 by Henrike Meyer (Dasfilter.com, August 12, 2016)

Here the everyday becomes visible again: one caregiver sits with a child on her lap. He rubs cheeks with her on one side, and then another. A child eats a cake and seems blessed. Near the beginning of the film, a girl with glasses smiles into the camera. “Oh, it’s you,” we hear in voice-over. Fifty years after the recordings were made, Hoolboom searched the internet for participants from that time. Donna Washington answered the call and was ready to engage with her past selves. Her responses were recorded, and then edited to create a kind of script that we hear in voice-over, spoken by an actress.