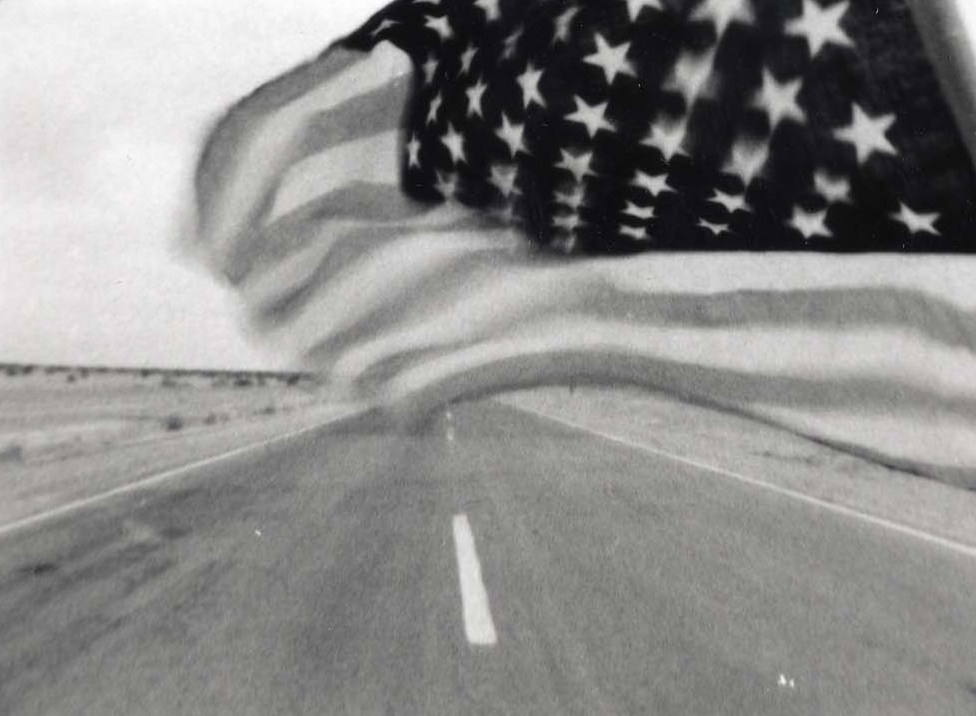 Richard was coming back into town and we set up a gig for him at the local co-op. He was bringing along his new, tough, beautiful, hard-won movie called The Last Days of Contrition. It showed just about everywhere that tough movies were being shown. But for this night we brought dad’s pull-down screen and a couple of boxes of beer and the crowd spilled out into the hallway. We sat around the projector and marveled at how he’d managed to go into America and find it so emptied and cruel. There were how many military vehicles shuttling across the desert in shots he’d waited all day for, so by the time he finally turned the camera on, all that anger had become something else. He really had a knack for the silver light. “The Last Days of Contrition (35 minutes black and white 1988) is an exploration of the Canadian and American landscapes, and the relationship between the two. The narrative deals with a journey through timeless, vacant American landscapes (baseball stadiums, Venice Beach, Mojave Desert, and a US Missile Base). The photographic strategy is influenced by a consciousness of light, a quintessential characteristic of American photography. I documented the American landscape in the tradition of the early formalist photographers (Walker Evans, Paul Strand, etc.) allowing there to be content in form. The Last Days of Contrition straddles two cultural forces while developing an understanding about our Canadian origins and muses. (RK) “Stunning photography here evokes the concern for light and shadow more often displayed by still photographers. Contrition travels from Venice, California, through the Badlands to baseball stadiums in Buffalo and psychically from a mid-sixties anti-Vietnam perspective to a mid-eighties sense of urban despair. Jingoism and the connection in American culture between games and war are deftly drawn in what is surely Kerr’s strongest, most political film to date.” (Images Festival Catalogue, 1988)

“Contrition is a moving poem that speaks of terror and wonder through the desolation of the western American landscape… Contrition acts as a metaphor for the industrial/military politics of twentieth century America.” (Avant-Garde Profiles, National Gallery of Canada) “… Contrition is an apocalyptic portrait of America stripped of all but the trapping of empire. Empty stadiums and whirling billboards convey an image of a despiritualized wilderness, a place in which stentorian voices offer harsh prophecies to the empty horizon.” (Robert Everett-Green, Globe and Mail, June 1988) “Contrition is an experimental film of ominous emptiness that chillingly conveys the decay of the American soul.” (Laura Miller, San Francisco Weekly, March 1989) “The masterpiece of the evening was by Richard Kerr, from Saskatchewan. Contrition was a showcase of cinematic tricks, including an unnerving roving camera and five minute long spinning pans of the Badlands. The film was full of images that alluded to fetishes about speed, sex and death; fighter planes in the big blue sky, roads leading to nowhere, vast empty landscapes and rear view mirrors.” (Donna Lypchuk, Metropolis, June 1988) “Filmed in the documentary style of early American photographers Paul Strand, Walker Evans and Dorothea Lange, The Last Days of Contrition follows the journey of the last survivor of the apocalypse, a woman, as she drives down a broken down and deserted America. Her progress is accompanied by a strident sound collage reminiscent of the work of William Burroughs. Ernest Hemingway, reading from his Second Poem for Mary predicts, “In the next war, we shall bury the dead in cellophane. The Host shall come packaged in every K-ration…” The reworking of the Canadian documentary film tradition into an expressive and personal style has been a hallmark of the Canadian avant-garde cinema and in The Last Days of Contrition Richard Kerr extends and ennobles this tradition in a powerful representation of a culture on the brink of self-annihilation.” (Martin Rumsby, “Hidden Cinema,” Saskatchewan Filmpool Touring Catalogue) “Kerr has taken particularly revealing moments from a trip that he shot while down in the States and crafted a work that deals with the awe and terror that he felt during that sojourn. The sights and signs that one sees and hears in this film have been distilled by Kerr to represent those exact elements that form a portrait of contemporary USA. The film is bisected and book-ended by a brilliant 360-degree pan shot of the Badlands of the Dakotas. One sees the bleak vistas, the black hills and its cacti, while on the soundtrack a repetitive voice speaks through a megaphone about the burying of the dead after the “next war.” This fear of war, of the bomb, permeates the film, giving it urgency and drama.

As a title, The Last Days of Contrition , refers both to the final Passion of Christ and to the specific meaning of the word ‘contrition’ which is to be ‘completely penitent; crushed in spirit by a sense of sin.’ Here the sin can be read to the militarization that has supplanted the democratic spirit in much of the United States.” (Marc Glassman, Cinema Canada) “…here are the frenetic and determined voices with their mad speeches and preachings recorded, as if off the radio, and carried into the film on a soundtrack mixed like the howling wind of the apocalypse. Kerr develops these preliminary conceits and the viewer realizes, mostly from hearing these voices, that, the key pretense of the film’s fiction is this wind blew some time ago. The filmmaker has come too late to play the tourist and has become an anxious archaeologist. These voices are making acts of contrition-theologically, the sinner’s declaration of sorrow for damnable sinning-or were, in the last days before apocalypse. Their speeches and preaching, the whirs and beeps, war noise and vile roars of the soundtrack are composed of America’s electronic ruins, plucked from the air, the last media simulations of a political culture at the brink. And they are to the landscape ruins of the desert which Kerr extends in obvious and necessary ways to lost farms and war planes, and then in a bizarre and brilliant political gesture to an empty baseball stadium. The stadium is a found-image of America’s populist polis and Kerr elaborates it into a sequence about dead democracy’s ruined agora. The soundtrack here consists of a black man expounding, in a fragmentary and looped speech, on the imminent collapse of civil society. He is another ruin, the prophecies of his words becomes another act of contrition. Kerr’s looping and sound mix, and the man’s emphatic absence from the image all underscore the fact of tape recording and, so, the ‘pastness’ of his speech. He is long gone, and what was spoken as a warning is now a sorrowful confession of the terrible things, which have happened… Still a young filmmaker, and in many ways a quintessentially gentle Canadian artist, Kerr has powerfully expressed what it means to go over a border both politically and for himself. That meaning, the rough sketch of a politics, can readily be shared by viewers of The Last Days of Contrition, for the film speaks through irony and fiction, of wonder and terror.” (Bart Testa, Art Gallery of Ontario Catalogue)