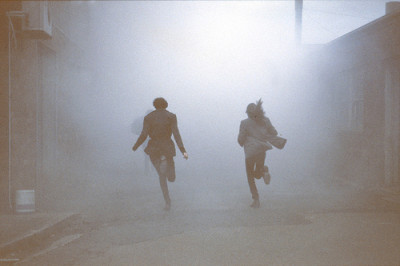 Andrew Scorer voice-over
Last night I had this dream that I’m eating the biggest Cadbury bar in the world. It’s so big that when I break off a chest sized hunk of chocolate crust I see this big cavern inside filled with milk chocolate syrup. Something urges me on and I walk until I come to this hallway which looks like the night sky, with each star a door and I stop in front of one which reads How To Change Your Personality so I walk inside. At first I can’t see anything because it’s so dark, but as I walk closer I can see there’s a man stooped over it, and that the light is coming from a small join of crystals gathered on the table. He never looks up as I get close and then I see that each of these crystals represents a part of myself – this one shows my love for screwdrivers and the universal wrench, the break with my sister, my weakness for men in hairpieces and altogether they have a shape, a single design, and that shape is my personality. It’s at just that moment the man seated at the table gathers all of the crystals up in his hand and casts them down again on the table, all of the same pieces, in a completely different design, and I remember the sign on the door: how to change your personality. He looks up then and for the first time I can see he’s wearing a doctor’s surgical mask, and he says I’m sorry, I’m afraid you’re HIV positive and he points down at the pile, and sure enough, right in the middle of the glow there’s an off colour stone slowly wearing down everything round it. And I think, the future’s not what it used to be.

Allegra Fulton v/o
A friend of mine has a half-fare transit card which she uses on buses and subways. The other day when she showed her card, the driver asked what her disability was. She said, “I have AIDS”. And the driver said, “No you don’t. If you had AIDS you’d be home – dying.”

Fade up Hoolboom face from water – he speaks in sync
I’m here to speak out today as a Person With Aids who is not dying from, but for the last three years successfully living with, AIDS. Members of my family who get all their information from reading the newspapers and watching television know two things about me – that I’m going to die and that the government is doing everything in its power to save me. They’re wrong on both counts.

Janieta Eyre portrait montage
If I’m dying from anything, it’s from the way you look when I see you with that funny kind of half smile on your face like you’ve farted or something, like there’s a bad smell in the room and it’s coming from me. If I’m dying from anything it’s the way you turn your face away when we meet, as if to say I’m here aren’t I, isn’t that enough? Just don’t kiss me, where’s that mouth been anyways? If I’m dying from anything, it’s from the terrible cleaners you put on the toilet after I’ve used it and gone. You always believed that if it didn’t smell bad or make you vomit or hurt, then it wouldn’t change anything, wouldn’t make anything better. Is that why I’m so difficult for you now?

Jan Bird v/o (World War II archival footage)
Living with AIDS is like living through a war which is happening only for the ones who are in the trenches. It’s worse than wartime because during a war people are joined in a shared experience. But this war has not united us – it’s divided us. It’s separated those of us with AIDS and those of us who fight for people with AIDS from the rest of the population.

Allegra Fulton v/o
Since then nothing has changed to alter the perception that AIDS is not happening to the real people in this country. It’s not happening to us in Canada, it’s happening to them – to the disposable populations of fags and junkies who deserve what they get. The media tells people they don’t have to care because the citizens who really matter are in no danger. How many more times do we have to read editorials saying, “Don’t panic yet over AIDS” – it still hasn’t entered the general population and until it does we couldn’t care less.

Cameron Bailey v/o
And the days and the months and the years pass by. And they don’t spend their days trying one designer drug after another because the last one gave you fevers, and the one before that made you so dizzy you couldn’t walk. You feel lucky to be living in a country where you can see a doctor when things go very wrong, you’re there so often it’s like a second home even though he can’t do much for you but change the kind of pills you take to make you sick. And they don’t spend their days explaining to their family that it’s not your fault, not their fault, it just happened that’s all, not because someone was brave or handsome or because the cause was noble, it was just a moment, a careless moment repeated millions of times around the world, in all the places where folks won’t be hit by cars or starve to death or walk underneath heavy falling objects. Because we already know how we’re going to die, what we don’t know, what we’re asking you now, is how we’re going to live.

Emma Davey v/o
Reporters all over the country are busy printing government press releases which say it’s not happening here, meaning it’s not happening to real people. Legionnaires Disease happened here because it hit people who looked like them, sounded like them, were the same colour as them – and that story about a couple of dozen people hit the front pages of every newspaper and magazine in the country and stayed there until the mystery was over.

Sally Lee – sync and v/o
AIDS is not what it appears to be at this moment in history. It’s more than a disease which will fatally infect twenty people while you’ve been watching this movie. More than a way for our young to teach us how to die. AIDS is a test of who we are as a people. When future generations ask what we did in the war, we have to be able to tell them that we were out there fighting. And we have to leave something for those who will come after us – remember that one day the AIDS crisis will be over. And when that day has come and gone there will be people alive on this earth who will hear that once there was a terrible disease, and that a brave group of people stood up and fought and in some cases died so that others might live and be free.

Mario Tenorio v/o
Like the unsung, anonymous doctors who are fighting this disease and are so busy putting out fires that they don’t have time to strategize, AIDS activists are stretched to the limit of their time and energy, putting out the fires of hatred and misinformation when they need to be fighting for drugs and research money.

Callum Rennie sync supered with pixillated sky
After all these years of watching movies even my dreams are filled with title sequences and flashbacks. So six months ago, when I thought I was dying, I just kept seeing a marquee with the words Show Closing Final Weekend flashing on it. And then one day the words stopped and I got better. And it’s funny because I didn’t really feel relieved or ecstatic, mostly it was just disappointing, because it meant going on, and it was just easier not to. I started thinking of the eight hundred breakfasts that waited for me, or the nine months in your life you spend brushing your teeth. Or how many times you’d have to stand with a big dopey grin on your face in place of conversation because all of the words you once knew have flown south for the winter.

And then two weeks ago it happened again, the dry cough and night sweats and Trevor your doctor is saying, ‘I’m not being alarmist am I?’ as he sends you off for the chest x-ray which will show that you’ve got pneumonia. Again. You go home and lie in a small pool of your own sweat before John comes over with flowers he’s picked from the police station up the road. Government buildings, he says, always have the best flowers. And he holds you and makes you promise not to leave and that’s when you realize that you don’t own your own death, that it really belongs to others as a kind of last gift, as the last thing you’re able to chip into the pot. And you look into his eyes knowing that death isn’t final after all. And that the angels aren’t ready yet. And then you fall asleep.

Credits
For inspiration, hard work
and showing me that angels
don’t just live in heaven

This film is based on a speech by lovely
Vito Russo who gave it at ACT NOW’s
Nine Days of Protest in the spring of 1988.
Much of it is included here with some bits I wrote.
Big hugs to Marc, Geoff, Kika, LIFT
and the Toronto Arts Council
c. Mike Hoolboom